For almost two years President Trump has been whipping up rage and resentment among rural dumbshit followers at those hillbilly Nuremberg rallies, accusing the establishment liberals of deep-state obfuscation and the mainstream media of “purposely false and inaccurate reporting” — i.e., “fake news.”

Tump hasn’t generated this ugliness in exactly the same way that Adolf Hitler whipped up loathing and resentment against Jews and Communists in the 1930s, but he’s come pretty close. You have to admit that.

Think of it — a U.S. president has deliberately orchestrated a climate of anger so intense that an attempted assassination of two ex-presidents happened yesterday via mail bombs. Multiple attempted murders that were essentially inspired by hate rhetoric that has been repeatedly owned and generated by this bloated, trash-talking sociopath.

And there are millions out there who will be voting next month for legislators who’ve pledged to support this animal. 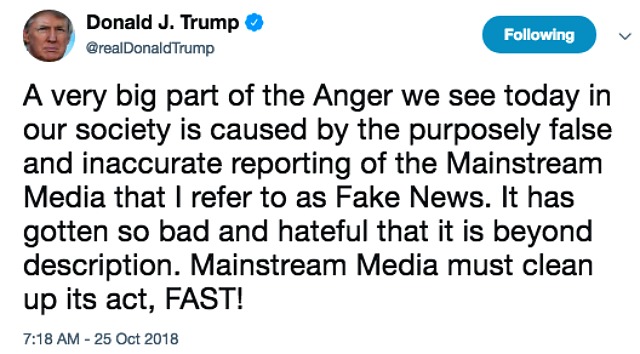