Yesterday a friend said A Star Is Born would’ve been much more interesting if the genders had been flipped — if the Jackson Maine character had been Sheryl Crowe with a drinking problem and if the ingenue had been some young guy (Shawn Mendes, Jaden Smith…someone in that realm). That way the plotline grooves wouldn’t seem so familiar and the whole vibe and atmosphere would’ve felt fresher and nervier.

I would have been delighted, in fact, if Bradley Cooper had instead directed Elyse Hollander‘s Blonde Ambition, the top-rated Black List script about Madonna‘s struggle to find success as a pop singer in early ’80s Manhattan.

It was reported last summer that Madonna is no fan of the script, and that she doesn’t want the film version to happen. They should make it anyway. If and when Blonde Ambition activates it’ll be a Universal thing. The producers will be RatPac Entertainment, Michael De Luca Productions and Bellevue Productions. 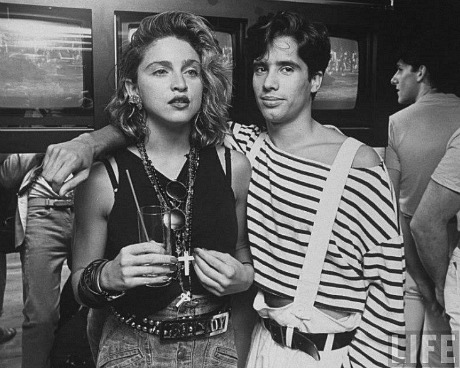 It was almost two years ago when I wrote that Ambition is going to be a good, hard-knocks industry drama — a blend of a scrappy, singing Evita with A Star Is Born mixed in. If the right actress plays Madonna the right way, she might wind up with a Best Actress Oscar nomination…maybe, who knows?

This is a flinty, unsentimental empowerment saga about a tough player who took no prisoners and was always out for #1. No hearts and flowers for this mama-san.

The success of Blonde Ambition will depend, of course, on who directs and how strong the costars are, particularly the guy who plays Madonna’s onetime-boyfriend John “Jellybean” Benitez, whose remix and producing of her self-named first album launched her career, as well as her Emmys bandmate and previous lover Dan Gilroy.

October 6, 2018by Jeffrey Wells11 Comments
« Previous post
Race To The Middle
Next post »
Aural Opposite of Venice, Italy