…then you aren’t the devoted, super-knowledgable cineaste you imagine yourself to be. Hint: If you look closely you can’t help but be fascinated by the complex gentle-gray plaid weave, but if you step back a couple of feet you’ll just see gray. If you’re still stumped, here you go. 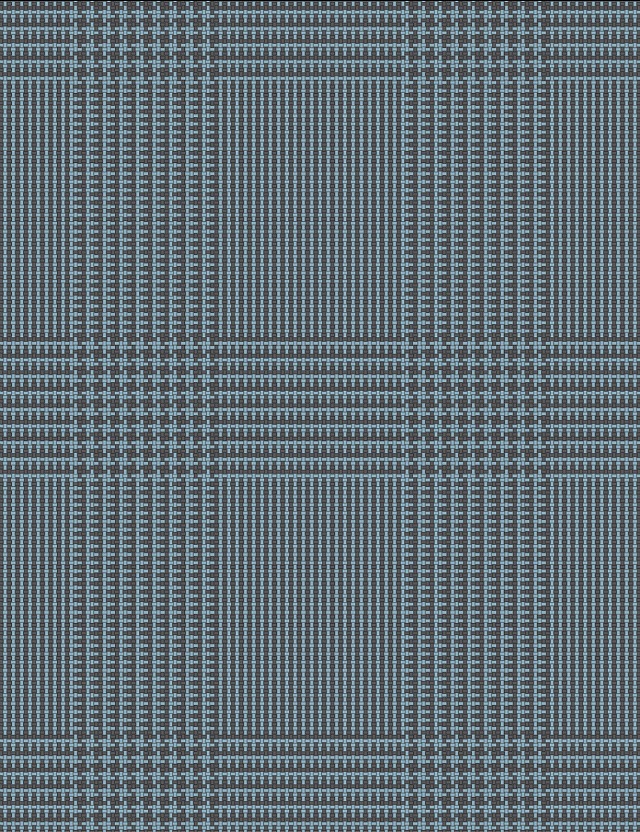 From a critic friend: “Just saw Bohemian Rhapsody here in Raleigh. Numerous rock-bio cliches, too long, and the scenes with Freddie and his female friend were deadly. But the acting is excellent across the board, it makes a great case for the band as a band, and the Live Aid opening and ending totally work. I think I liked this more than A Star Is Born — don’t hate me.” In other words, like I’ve been saying, it’s a good half-and-halfer.

HE community reactions requested — thanks.

There’s a report that the four forthcoming Avatar sequels will be titled The Way of Water, The Seed Bearer, The Tulkun Rider and The Quest for Eywa. They all sound like YA dogshit to me — like movies made for fans of fantasy-adventures in the Tolkien or Campbell traditions, which I’ve never had the slightest interest in. Like ever.

Who thought that The Way of Water would be catchy, especially in the wake of Guillermo del Toro‘s recent The Shape of Water? Not to mention The Weight of Water, an 18 year-old thriller by Cameron’s ex-girlfriend Kathryn Bigelow?

I’ve arranged to see WHE’s forthcoming 2001: A Space Odyssey 4K UHD Bluray (streeting on 11.20) at a friend’s place (possibly as soon as this weekend), but some screen captures & comparisons posted by DVD Beaver‘s Gary W. Tooze are alarming. Because what I’m seeing are images that are significantly darker than the 2001 images I’ve been looking at for decades on theatre screens, VHS, laser discs, DVDs and the 2007 WHE Bluray. And the sides of the earlier Bluray (2007 and 2011) have been sliced off, for some reason, on the 4K.

I need to wait until I see the 4K myself, but the Tooze images are not pleasing, and the last time I checked he wasn’t blatantly misrepresenting Bluray images as a rule. So I’m wondering how or why Stanley Kubrick‘s 1968 classic is looking so damn murky and muddy.

All I know is that I’m alarmed all over again. Remember that despite what we’ve all read about this not being the non-restored Nolan “nostalgia” version with the piss-yellow and teal tints (and it’s really not, I’m told), this WHE 4K Bluray has had three fathers — Ned Price, Chris Nolan and Leon Vitali. And at least one of them is the bad guy here because 2001 has never been this dark, and it never should be. I mean, some of the 4K screen captures are ridiculous.

1. Tooze comparison #1 — the MGM logo. All my life the color of 2001‘s MGM logo has been a slightly muted publisher’s blue, like the top image from the 2007 Bluray. Now it’s a mixture of gravel gray and midnight blue — like the color of flagstone mixed with a dusky, early-evening sky. In short, it’s a lot darker and completely different than the logo image I’ve been looking at for half a century now. What is this?

2. Tooze comparison #2 — “Open the pod bay doors, Hal”. In the above 2007 Bluray image, Dave looks like he always has inside the pod while asking HAL “what the hell’s the problem,” etc. In the bottom 4K image, he looks like a demon ghost from The House on Haunted Hill. All you can really see are his piercing, key-lighted eyes. What the hell is this? 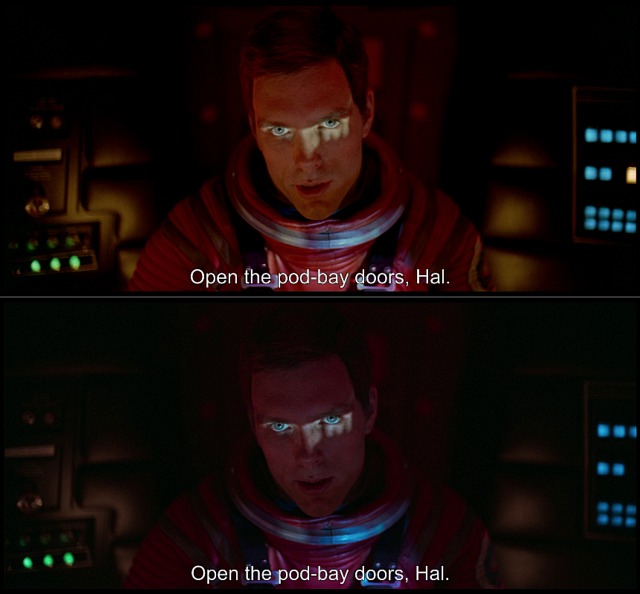 3. Tooze comparison #3 — Space-suit Dave in French chateau. The 2007 Bluray image of red-helmeted Dave is perfect, but you can barely make out his facial features in the 4K image. This isn’t just overly dark — it’s absurdly dark, as in the person who mastered this shot was (a) drunk, (b) stoned or (c) an anarchist who snuck into the WHE video mastering room with the intention of fucking things up. 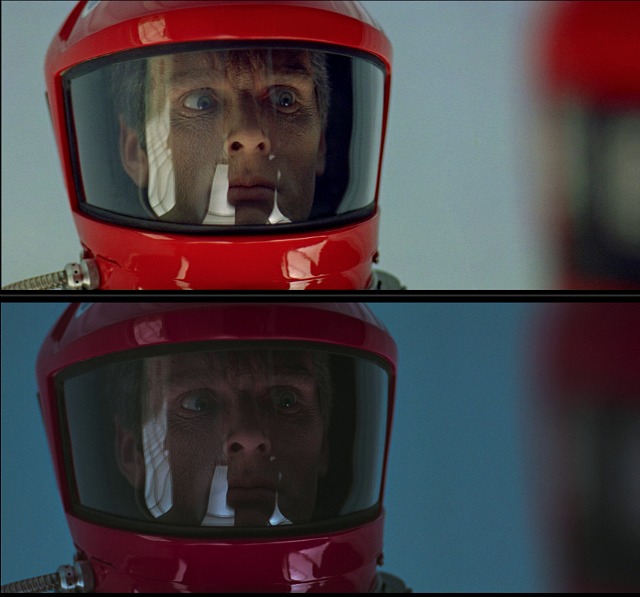 4. Tooze comparison #4 — Discovery air-lock chamber. If you compare closely you’ll see that visual information on the right and left sides of the 2007 Bluray image (which was taken from a 35mm source) has been sliced off for the 4K. 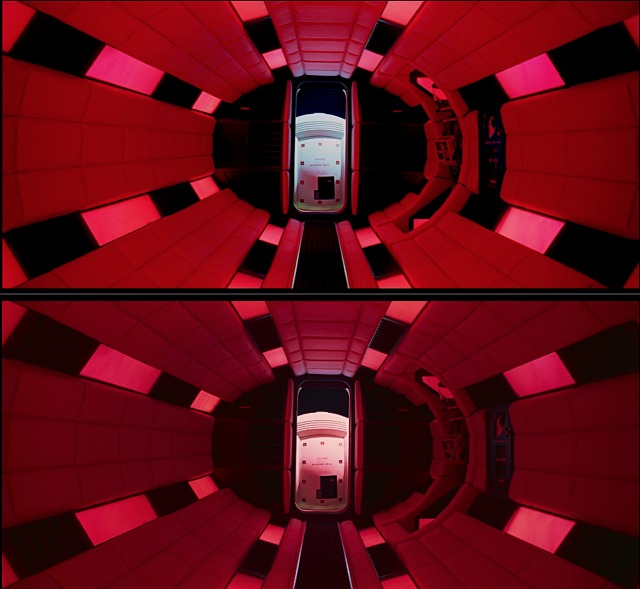 This morning a politically naive Variety editor decided that Jane Fonda comparing Donald Trump to Adolf Hitler required a “whoa!” headline. Louis C.K., Michael Moore…what serious historian or fair-minded journalist hasn’t made this comparison? Fonda: “If you have read anything about the rise of the Third Reich and Adolf Hitler you will see the parallels. Attacking the media is the first step and move toward fascism. The cornerstone of democracy is an independent, democratic media. And it’s under attack in a major way because bad guys are running it all. We have to make sure it doesn’t continue.” 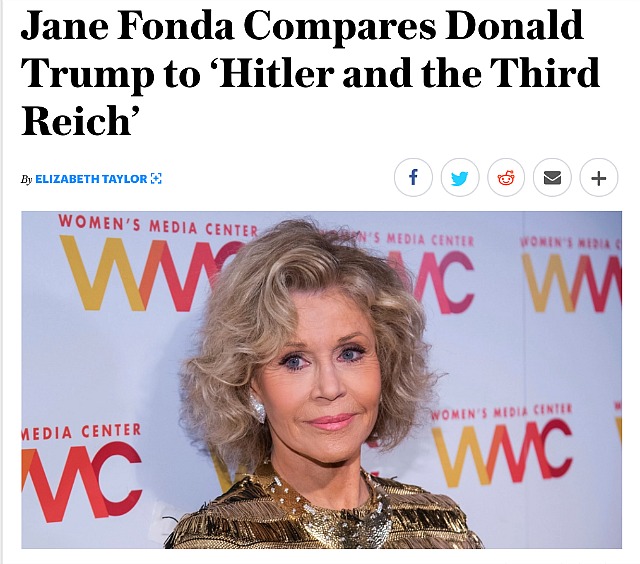 “Operating Table,” initially posted on 8.15.13: “John Frankenheimer‘s Seconds is a black drag to sit through. A dark, creepy, chilly-hearted downer from start to finish. Mainly about malevolence and threats and intimidation and dread. ‘Interesting,’ yes, because of the creepy Orwellian (or do I mean Burroughsian?) tone and James Wong Howe‘s nightmarish black-and-white cinematography. But it’s mostly punishing. 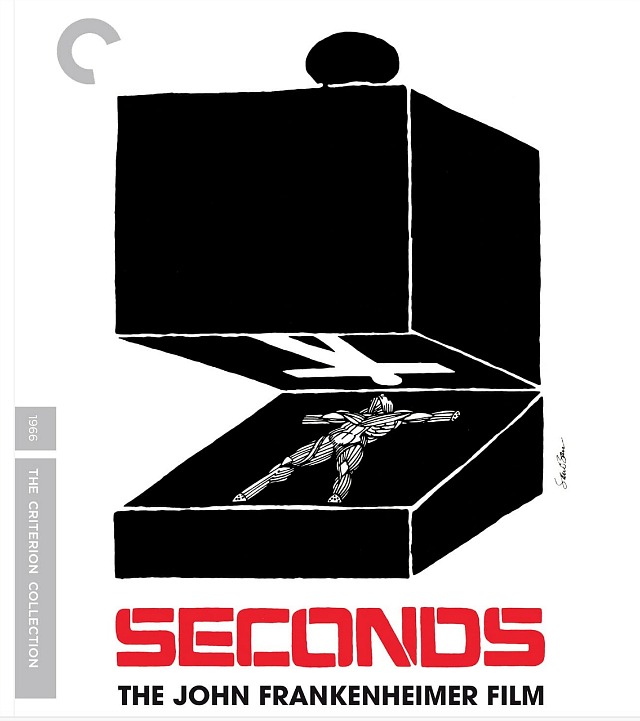 “Seconds lasts 107 minutes and aside from the grape-stomping scene there isn’t even a 30-second passage that delivers anything that comes close to enjoyable. The movie makes you feel like there’s a needle in your neck the whole time.

“Rock Hudson spends pretty much the entire film looking over his shoulder and sucking in cigarette smoke and acting like one of the most haunted and miserable fucks who ever agreed to star in a film about a haunted, miserable fuck.

“The dweebs like Seconds because it’s a modern horror story about middle-class entrapment and corporate malevolence, and because some of James Wong Howe’s camerawork vaguely recalls the severe angles and surreal set design in The Cabinet of Dr. Caligari. But if you watch it from a gut Joe Popcorn level (i.e., without your honorary scholastic film lover cap on) it will send you into a tailspin of depression. It’s not ‘scary’ — it’s suffocating. It’s about ‘how much longer does this last?’ It’s about hitting the fast-forward button during the slow scenes.

“The fundamental thing that you can’t buy is that John Randolph could be transformed into Hudson through plastic surgery. It would have been ten times more interesting if Frankenheimer had just had Hudson wear lots of older-guy makeup with a putty nose and chin and neck wattle. Randolph is maybe 5’11 or six feet tall compared to Hudson’s six-foot-five, and it’s just ridiculous that plastic surgeons would be able to add five or six inches of height to his frame.

Every time I re-watch this hour-long interview Marlon Brando makes more basic sense and Dick Cavett, whom I’ve loved and admired for decades, seems a little antsier and shiftier.

My favorite slim jeans are dying. It’s been happening for the last couple of months, and it’s sad how they always give up the ghost in the same ways. First the knees thin and fray and rip, and then the crotch area thins and frays and then a hole appears. Then I try and sew them up but the crotch area frays again, and then the knees develop more holes or then big-ass rips. Which I realize is cool in department-store circles.

But you can’t continue when the crotch starts to go. And after a while you just accept that sooner or later jean-death is inevitable. There’s no stopping the process.

It’s like dealing with a dying pet. You take them to the vet and feed them medicines and pay for the expensive procedures (I know a couple who paid almost $10K for a tumor-removing operation for their dog, only to see him drop dead a couple of months later on the kitchen floor), but the end is the same.

“Jobs may be back but they pay squat, especially compared to the rising costs of housing, health care and education. Employers are continuing to cut pension and health care benefits, and jobs are less secure than ever. One in five jobs is held by a worker under contract without any unemployment insurance or sick leave or retirement savings. And housing costs are now skyrocketing, with a large portion of Americans paying a third or more of their paychecks on rent or mortgages.” — Robert Reich. 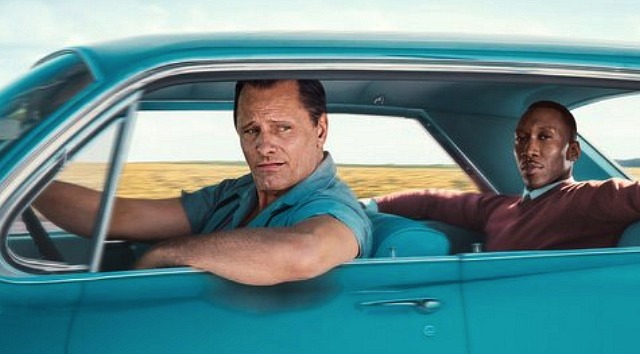