A New York “Intelligencer” piece by Sasha Issenberg (“Maybe It’s Time For America To Split Up?“) has taken a serious look at cutting the red states loose and creating a sensible, solid-blue America that wouldn’t be hindered by racist bumblefuck obstinacy — an old HE fantasy. The difference is that Issenberg is envisioning a three-federation system — Blue, Red and Neutral. 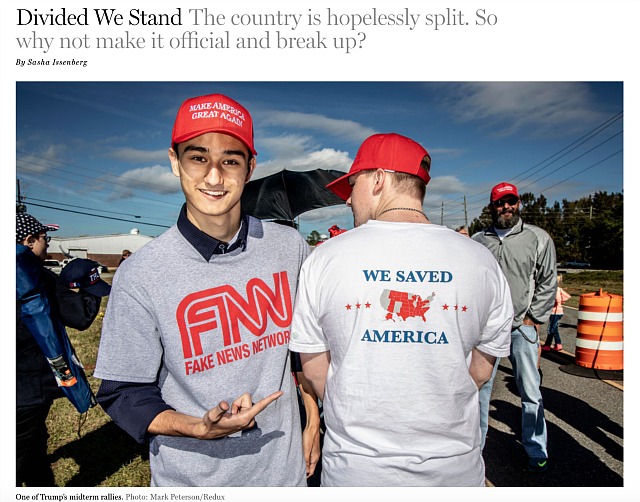 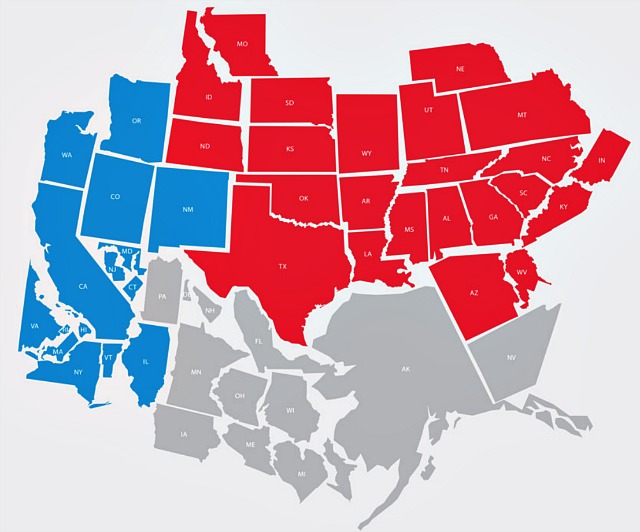 In a 3.15.13 riff titled “Common Knowledge,” I wrote that “the best thing that could happen all around would be to create a separate nation among the Midwestern and Southern areas of this country — just cut the yokels off and let them raise their own revenues and nurture their retro beliefs, values and prejudices. They’re just a drag on the rest of the country and the sooner Red America is cut loose, the better for the rest of us. Seriously.

“This isn’t the 1860s. Our borders are secure, we have nuclear weapons, and nobody’s going to invade. We can be two countries and make out just fine. Yugoslavia broke up into two or three chunks and they’re doing okay. Czechoslovakia became two nations and they’re holding it together. We could create our out Czech Republic — a Blue America — and let the ‘Slovakians’ have their own. I’m perfectly serious here. Get rid of the dumbshits and a lot of the nation’s big problems will become much more managable.”

In a 7.4.14 piece called “Independence From Ignorance, Stupidity, Downmarket Vibes,” I wrote that “the U.S. of A. is impossibly divided and never the twain shall meet. The right has gone totally around the bend. The urban Blues are the Czech Republic and the rural Reds are Slovakia, and I really think it’s time for the Czechs to sign a new Declaration of Independence and cut those bozos loose.”

“It’s not a rumor — many of the bumblefuck regions are where the least affluent, most downmarket, under-educated and culturally resentful U.S. citizens reside. If you can’t re-educate them the next best thing is to isolate them and let them stew in their own juices.” Alternate rationale: “Fuck ’em if they can’t take a joke.”

November 14, 2018by Jeffrey Wells51 Comments
« Previous post
Drunken Libatique, Polish Cops Mix It Up
Next post »
Son of “If I Don’t Sell It, You’re Fired”