I had one strong thought in my head after seeing Mimi Leder‘s On The Basis of Sex (Focus Features, 12.25), a well-meaning but mediocre saga about the formative years of legendary Supreme Court Justice Ruth Bader Ginsburg (Felicity Jones).

Bader speaks with a fairly distinctive Brooklyn accent, so how is Jones at imitating this? Not so hot. I couldn’t really hear “Brooklyn” in her speech patterns. What I heard was “British actress doing a decent job of sounding American but not really trying to get the Brooklyn thing right.”

Believe it or not there’s a sex scene between Jones and Armie Hammer, playing Ginsburg’s attorney husband Martin. Ruth Bader Ginsburg doing the nasty? Please…cut away! It was this utterly pointless detour that told me On The Basis of Sex wouldn’t be panning out. My hopes actually started to sink less than 10 minutes after it began.

On the Basis of Sex feels like a dumbbell YA film — tonally and attitudinally similar to The Hate You Give only made for under-educated megaplexers (is it sexist to say that this film is aimed at women?) and concentrating on 20th Century sexism, judicial matters and gender discrimination.

I admire RBG, despise sexism, and totally support erasing gender discrimination but God, this movie is a drag to sit through.
 
Leder’s film doesn’t cover the entire arc of Ginsburg’s life but roughly a 15-year period — from her beginning studies at Harvard Law School in ‘56 (when she was 23) to her vocal arguing of a landmark gender discrimination case on behalf of the ACLU in the early ‘70s, when she was pushing 40.

Roughly half is about RBG’s coping with standard male sexist attitudes and gender discrimination and the struggles of raising a family.  The second half of the film mostly focuses on said landmark case.

It bears some resemblance to Reed vs. Reed (1971) in that it involves gender discrimination, except the dramatized case applies to tax laws and particularly tax deductions in the matter of a son caring for his ailing mother.  I’m presuming that the case has been simplified and/or fictionalized to some extent. I can’t find anything that closely resembles it online.

The “painfully dishonest dramatic invention” occurs during the climactic legal argument scene in the gender discrimination case before a circuit court tribunal of three judges.  It’s the use of a familiar device in which the hero protagonist initially seems to be dropping the ball — gulping, faltering, seemingly losing his/her nerve or concentration. The idea is to artificially ratchet up the suspense and spark concern among gullible audience members (“Uh-oh, will she pull this off?”).  I guarantee you that the Real McCoy never faltered or hesitated when presenting legal briefs or making arguments.

I was afraid that Leder might resort to this crap, and at the same time I was hoping she wouldn’t. But she did. 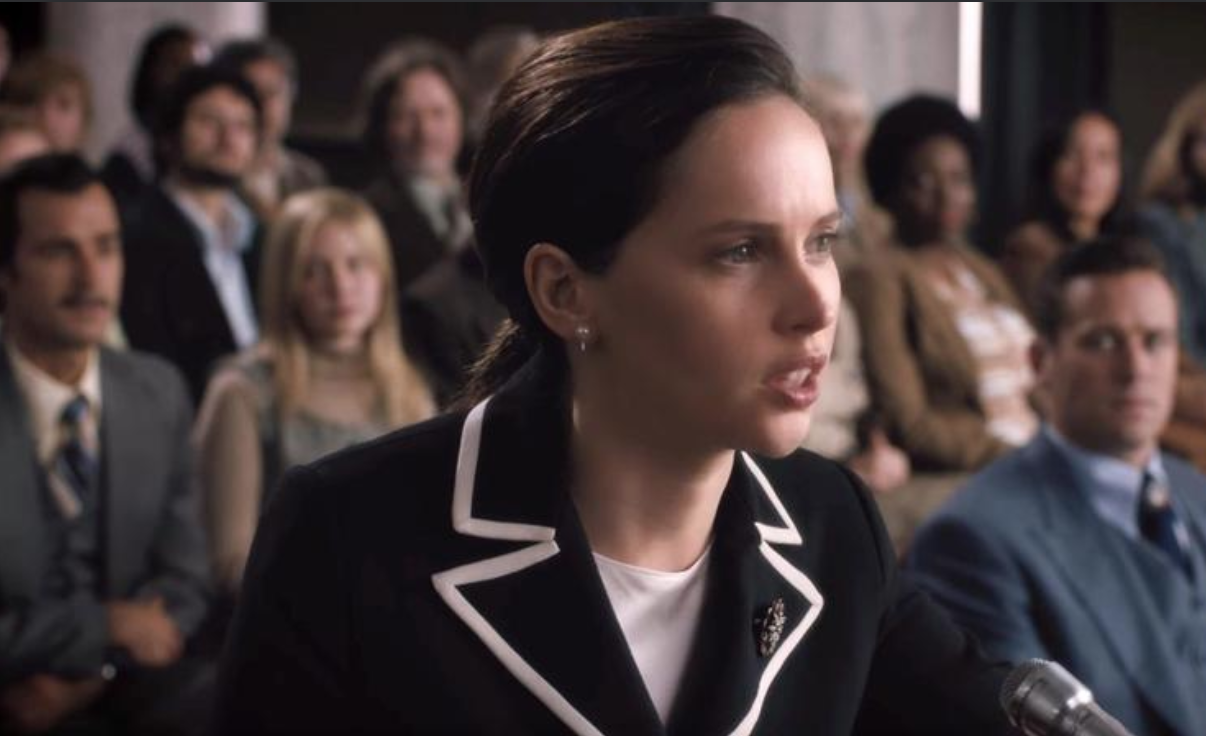