Originally posted on 4.6.12: In her review of George Roy Hill‘s The Sting, Pauline Kael asked, “What is this movie about anyway?” Answer: Emotional comfort in the form of assured professional craft. It’s about conning people into caring about a shallow story with no themes or subcurrents whatsoever. It’s about keeping them intrigued even though the good-guy con artists have the upper hand all the way. 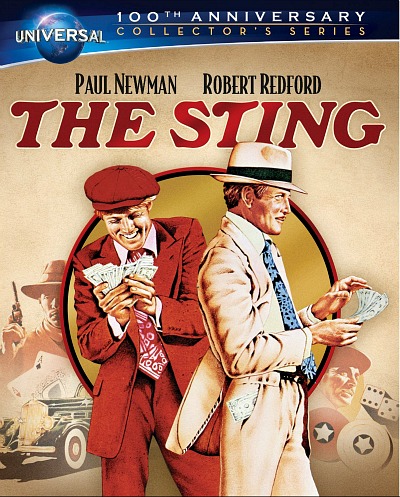 The Chicago Limited poker-game scene is the most satisfyingly shot and performed scene of its type in Hollywood history because it’s not about poker, but about two cheats trying to out-fuck each other. Paul Newman‘s smug and rascally confidence is key, but the whole thing really depends upon Robert Shaw‘s seething rage — the scene wouldn’t play without it. It’s all about boiling blood.

I can watch this scene all day long and never get bored because it’s perfectly shot, acted, lighted and timed. It’s the kind of thing that big-studio movies used to do really well. The emphasis was just so.

Bob Hightower said: “Pointless, shallow, smug, fancy-schmantsy style substituting for a confusing and empty story. A worthless movie IMHO. It’s a joke that it got so much acclaim. Universal made a Scott Joplin biopic to help repay the debt. It is extremely tragic and altogether a serious look at the man. No one went to see it. They preferred fluff with Joplin’s great music attached.”

Travis Actiontree said: “Incredibly enjoyable film. Agree with thoughts expressed above. However…
I never was a fan of the look. Typical Universal Studios look of that era. Someone told me they used television crews back then to shoot many of their films and it looks like it. Really harsh key lighting, heavy shadows, etc. Often looks like an episode of McCloud. And I, too, think Paper Moon was better.”