In an 11.19 Criterion essay on Some Like It Hot, Sam Wasson writes that director-cowriter Billy Wilder had relatively simple things on his mind. “[He] thought cross-dressing was funny. He thought Americans, dizzy in the rat race, were funny.” Like when Tony Curtis says to Jack Lemmon, “You’re a guy, and why would a guy want to marry a guy? and Lemmon answers “Security.”

“That’s Wilder capitalism speaking,” says Wasson. “Not love or lust or even man or woman.”

But then Wasson screws up. “Some Like It Hot isn’t Tootsie,” he declares. “It’s not interested in how the experience of being a woman can make men better men.” Nope — exactly wrong.

Curtis’s Joe is a rake and a cad — a “love ’em and leave ’em” type, a nookie hound, literally the kind of guy who might borrow money from a girlfriend in order to bet on horses.

Then, dressed as “Josephine”, he meets Marilyn Monroe‘s Sugar Kowalczyk on the train, and she tells him about her run of bad boyfriends, and how one threw cole slaw in her face and left her with a squeezed-out tube of toothpaste.

Undaunted, a couple of days later Joe cons Sugar into falling for him by pretending to be an oil millionaire (i.e., “Junior”). Another notch on the bedpost.

But when Joe and Jack Lemmon‘s Jerry are forced to lam it (Spats Columbo!), Joe feels badly about lowering the boom. He gives Sugar the diamond bracelet that Joe E. Browne‘s Osgood had given to “Daphne.” A couple of hours later Joe (dressed as Josephine) sees Sugar singing “I’m Through With Love” on the bandstand, and the guilt sinks in. Wilder’s camera holds a very long shot of Curtis feeling quite badly about breaking Sugar’s heart. So badly that he risks his life by walking up on stage and kissing her goodbye.

Saxophone Joe would’ve never risked his neck for a dame, but “Josephine” does. After playing the field and treating women like shit he’s seen “how the other half lives,” and becomes, you’d better believe, a better man for that.

HE to Wasson: Sydney Pollack got the above-referenced idea for Tootsie from Some Like It Hot. 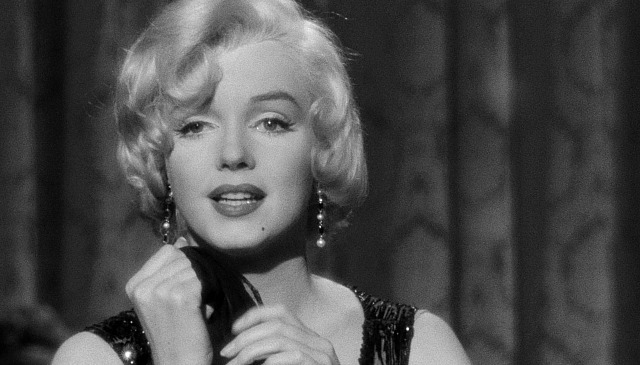