“Vice” on a Sunday Morning

Adam McKay‘s Vice (Annapurna, 12.25) is a brilliant, slash-and-burn, hellzapoppin’ portrait of deliciously ruthless schemin’, schemin’, schemin’ like a demon. And it’s great rightwing fun for the most part — witty, wicked and wonderfully cruel. How we fucked ourselves and bought the WMD bullshit and murdered tens of thousands and bombed the hell out of Iraq and created ISIS in the bargain, etc.

The primary object of scorn and fascination, of course, is former vp Dick Cheney (fully inhabited and reanimated by Christian Bale, as you may have heard) but the film teems with a whole cavalcade of conservatives…a whole kill-or-be-killed universe of conniving super-serpents who’ve risen and slithered over the last half-century (George W. Bush, Donald Rumsfeld, Scooter Libby, Paul Wolfowitz, Antonin Scalia, Frank Luntz) along with Dick’s go-getter wife Lynne (Amy Adams) and their daughters Mary and Liz (Allison Pill, Lily Rabe).

Really and truly, the gang’s all here and it’s all fun, fun, fun. Or it was for me, at least. 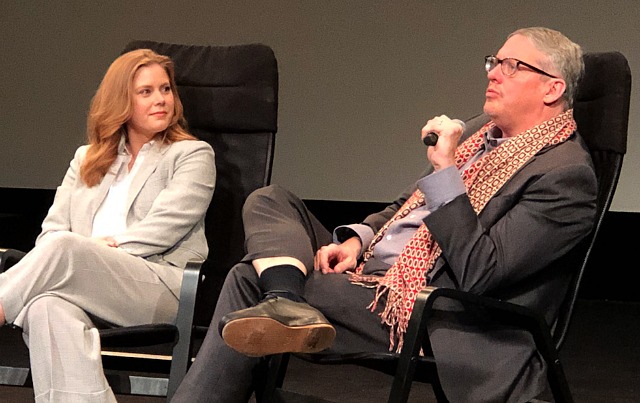 “Fun” in a downishly deadpan sort of way, of course, because we’re talking about the balls-out career of a really shitty, cold-blooded human being as well as the collapse of the twin towers, the imagining of WMDs and the invasion of Iraq and all the horrors and cold-cockings and focus-groupings and flat-out lying that followed. Not to mention the smirking and jaw-clenching.

And it’s all so precise and scalpel-like, so dry and cutting and laser-focused. It’s a movie that says “Dick, Dick…what a dick!” As well as “you guys out there, the ones eating the popcorn…you fucked yourselves and our country by electing these assholes…you know that, right?”

And stylistically Vice is all over the place so you don’t know where the hell to turn. It fully cops to being a “movie” from the get-go, offering a narrator while reversing and fast-forwarding, delivering a blatantly phony ending at the halfway mark, always smirking, full of self-regarding commentary, double-backing and hop-scotching around…it’s instructional with a bullwhip.

Bale will land a Best Actor nomination and deserves to win it, if you ask me. You can’t help but marvel at the voice, the attitude, the physical transformation…all of it. Bale sure as hell has done more than deliver a first-rate impression of Kris Kristofferson in the ’76 version of A Star Is Born, which is arguably what his principal competitor has been praised for.

Adams, count on it, will definitely be nominated for Best Supporting Actress. She glares, she snaps, she takes no shit.

A week ago Variety‘s Kris Tapley asked whether “the moviegoing audience — indeed, are Academy voters — ready to take stock of all these chapters in history with the depressing [present-day] news glowing up at us from our mobile devices on a daily basis?” Of course we are! McKay is saying “fuck these sick-evil guys and their craven conniving for rightwing power…do you wanna have fun with this shit or not?” The answer is a rousing “yeah!”

Tapley acknowledges that Vice “could be argued as [being] the most urgent and important film in the race this year,” but then he turns around and wonders “if the stomach is there for it.” He also says that Vice “leaves you feeling like crap.” What a candy-ass!

Here’s an example of something that Donald Rumsfeld found funny back in the ’70s, at least according to McKay’s script. He was talking strategy with Cheney, and then Cheney turned solemn. It’s not “funny” dialogue, but it’s dryly amusing because it tells you who Rumsfeld is deep down (and by extension all of those righty ayeholes):

Vice is offering itself to the Golden Globe gang as a comedy. Is it in fact a hah-hah deal? Sure it is…if you understand the kind of humor that McKay is churning out. I’ll admit that it turns kind of grim toward the end when McKay is taking stock of all the death and despair and bloody, burned bodies…all the havoc and horror and shrapnel that has rained down on all the enemies of the American war machine over the decades.

Cheney/Bale breaks the fourth wall at the very end, and what he says to the cameras is perfect. Even better is the song that Vice ends with during the closing credits — “America” from West Side Story. 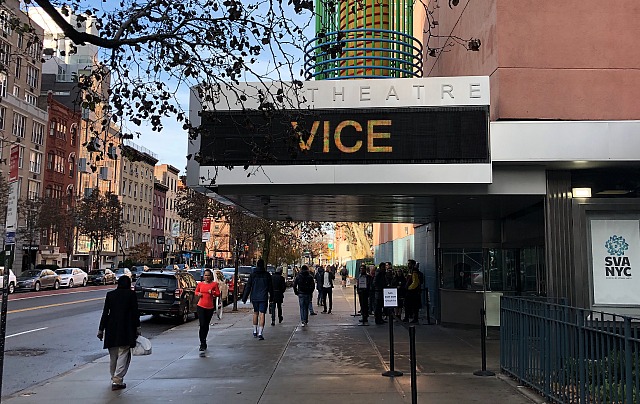 November 25, 2018by Jeffrey Wells56 Comments
« Previous post
Positively 23rd Street
Next post »
Wary As All Get Out