Support on Patreon Follow @wellshwood
28 Comments
Years of Delay, Finally Got Made

You can sense a riveting, well-textured quality in J.C. Chandor‘s Triple Frontier (Netflix). And an atmosphere of grit and sweat and heavy tropical air. A “rob the drug lords” plot may suggest the realm of an elevated programmer, but it feels like the first really exciting ride of 2019.

J.C. Chandor (All Is Lost, A Most Violent Year) is a first-rate director, and the Mark Boal script, which dates back to ’09, is tense and tightly constructed., or so I recall. Chandor has a co-writing credit. Ben Affleck, Oscar Isaac, Charlie Hunnam and Garrett Hedlund. I want to see this in a theatre. It feels formidable.

Eight years ago Tom Hanks signed to do an earlier version of Triple Frontier under director Kathryn Bigelow. Johnny Depp was also attached or at least interested. There was talk at the time of changing the title to Sleeping Dogs. In late ’12 it was reported that Bigelow and Boal had put the project aside. Hanks would have played Affleck’s role.

“So they were grinding after all, those cameras. Life, which can be strangely merciful, had taken pity on Norma Desmond. The dream she had clung to so desperately had enfolded her…”

Get Out suggested that Jordan Peele‘s schtick is social-metaphor horror with a racial stamp. The good guys (Daniel Kaluuya, Lil Rel Howery, Lakeith Stanfield) were near-victims of the white liberal hypnotist cultural predators (Allison Williams, Catherine Keener, Bradley Whitford, Caleb Landry Jones). I’m not presuming that Peele’s Us (3.15) will be cut from the same cloth, but we can probably assume that some sort of social metaphor will be woven into the fabric. Lupita Nyong’o and Winston Duke are the good guy parents, and one of their good-guy pallies is played by Elizabeth Moss. But who are the “shocking visitors”? Earlier today Wilson Morales suggested it might be a Mother!-type deal. Others have suggested we may find echoes of Michael Haneke‘s Funny Games. Thoughts? 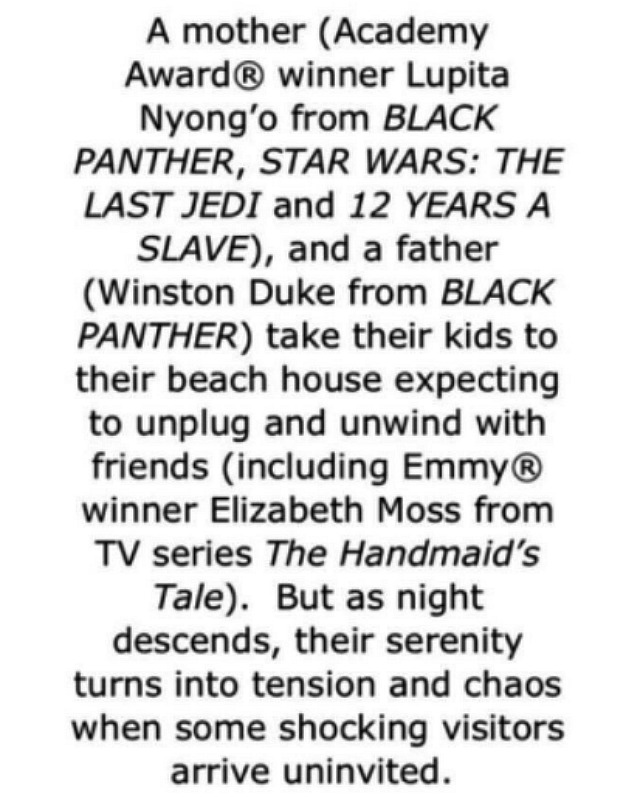 20 Comments
A Lotta Chumps Out There

Star Wars geeks have emptied out the Columbia Sportswear Company’s inventory on STAR WARS EMPIRE CREW PARKAS. But look at the design! Dorky bright blue? If you’ve seen The Empire Strikes Back you know that Harrison Ford‘s Ice Planet of Hoth parka is much cooler looking — a smoky bluish gray, off-white scarf, left-breast insignia. If I was a serious Star Wars fan I might consider buying a decent-looking replica of the Han parka, but not this nickle-and-dime knockoff. 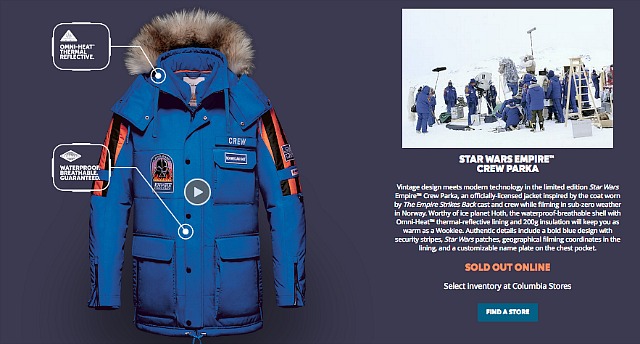 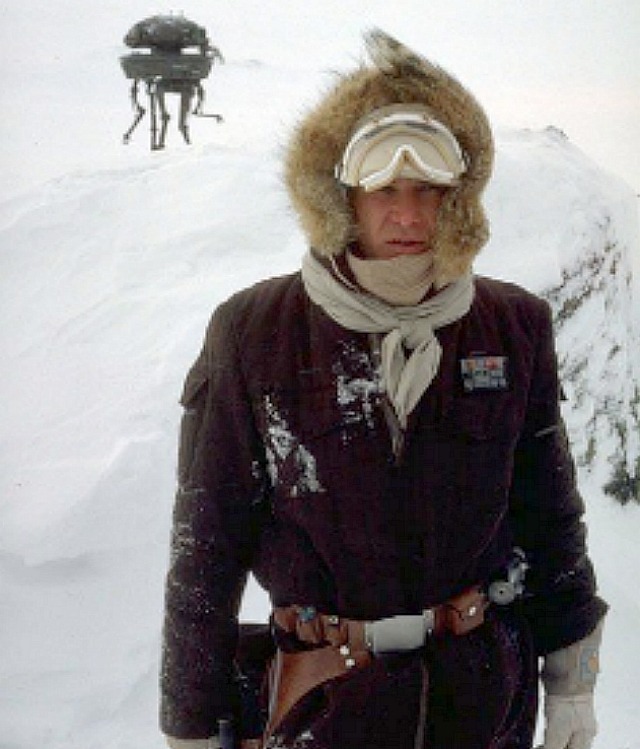 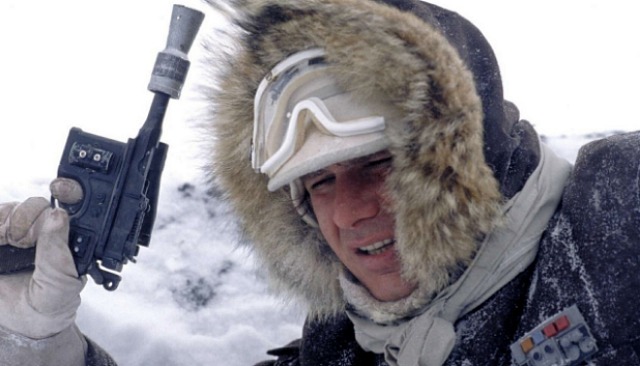 Despite the Sundance press pass hangup that I revealed three days ago, I’ve decided that I’m too enthralled with too many Sundance ’19 films to let this situation slide. For 25 years Sundance has been an annual shot in the arm for me — an event that saves me from the monotony of the Oscar race and gives me a few new films to focus on and perhaps derive excitement from. So I’m going to head up there and see what kind of tickets I can grub from publicists. Maybe I won’t see as many films as I’d like to, but at least I’ll be roaming around and giving it the old college try. I’m on the right side of this issue, and it just doesn’t feel right to lie down and acquiesce.

You don’t know what you have ‘til it’s gone. I’ve never had any diseases or compromising ailments or chronic issues, and I don’t have a damn thing wrong with me now except for what happened five days ago. I’ll maybe succumb to a fever now and then, but otherwise I’m bullet-proof. Been that way all my life. But now, right now, I’m living in a kind of prison, a recuperating-from-surgery purgatory. First-rate digs, all the comforts and I love my Sony 4K HDR 65-incher, but I’m still behind bars in a sense.

I can walk around and drive and do whatever, but I’m saddled with plastic drainage tubes, a potato-sized neck swelling under my left-side jaw, surgical staples, a certain amount of stiffness and pain, etc. And I have to carry around a Prevena 125 device and a plastic liquid-deposit balloon. Some of the staples are being removed on Tuesday, the 11th; the remainder will be removed on Tuesday, 12.18. This too shall pass and blah-blah but for the time being it’s a trial.

At least I’ve got imminent Manhattan screenings of The Mule and Amazing Grace — that much to look forward to.

The year-end awards decided by the Los Angeles Film Critics Association are almost always outside the box. When they champion a film or a performance that I happen to share admiration for, I go “yay.” But more often my reaction to their oddball picks is (a) “huh, really?…okay” or (b) “what the fuck?” I will therefore signal my reactions today with either (Yay), (HRO) or (WTF).

I’m speaking for the world here. I’m speaking for every man, woman, child and dog on the planet earth. LAFCA awards are partly if not largely about their own challenge-to-conventional-thinking tradition. I’m not saying they’re not trying to salute quality, but they have to do that LAFCA thing, that “hey, look at us, we’re nervy and different” between bites of bagels and lox. Especially in this era of p.c. terror and intimidation by SJWs and virtue signallers — an era that seems to be rivalling the Commie-witch-hunt era of the late ’40 and ’50s.

Best Actress: Olivia Colman, The Favourite / (Yay), fine but Melissa McCarthy is way, way better (and with a better-written role) in Can You Ever Forgive Me?
Runner up: Toni Collette, Hereditary / (Yay)

Best Supporting Actor: Steven Yeun, Burning / (HRO)
Runner up: Hugh Grant, Paddington 2 / (WTF)
HE comment: They blew off Mahershala Ali‘s note-perfect, crowd-pleasing performance in Green Book because the p.c. elites have condemned Peter Farrelly‘s film because it had the audacity to tell a 1962 story by 1962 standards, and because it doesn’t pass along the progressive ethos of 2018. But there’s no excuse at all — none — for blowing off Richard E. Grant‘s performance in Can You Ever Forgive Me?