Lukas Dhont‘s Girl, another HE favorite, won the European Discovery Prize. Luca Guadagnino‘s Call Me By Your Name, which didn’t open in Europe commercially until last January, won the People’s Choice award.

I’m aware that some regard Kevin Connolly‘s Gotti as one of the 2018’s worst, but I’m not so sure. I finally saw it last weekend and my general impression was “okay, this could be better…all right, a lot better but at least it’s not painful to sit through.” Put another way: semi-dismissable but short of atrocious.

My most painful viewing experience of 2018 was Avengers: Infinity War, which I endured sometime around 4.23.18. It’s obviously lazy to re-post a review, but I don’t feel the fire today:

Less than ten minutes into Anthony and Joe Russo‘s Avengers: Infinity War (Disney, 4.27), I felt as if Josh Brolin‘s Thanos had leapt out of the screen and was sitting on my chest and blowing his stinking breath into my face. I also felt like a little kitten about to be given a bath in the kitchen sink. “Mew, mew…I don’t want to endure this…nooooo!”

But I had to because I wanted to experience the latest big Marvel flick, and I was seriously excited about…well, who knew but the death of Robert Downey, Jr.‘s Tony Stark had been rumored, and I wanted to at least celebrate this. Please. I was down with Iron Man a decade ago, but then Downey became the Reigning Marvel Paycheck Whore and for that he must pay.

I promised yesterday that I wouldn’t spoil any deaths in this film, but can I at least say that (a) the wrong guys die, (b) not enough guys die, and (c) you can’t trust a Marvel film to deliver death with any finality because Kevin Feige doesn’t respect death any more than comic-book creators respect it, which is not at all. Or woundings, for that matter. The MCU mostly regards death and serious physical injury as a tease, a plot toy, something to fiddle or fuck with until the apparently dead character comes back to life, etc.

President George Bush deserved the shoe and more for igniting the greatest foreign-policy blunder in U.S. history and creating ISIS in the bargain. But I have to admit that his seemingly half-amused expression during the shoe-throwing, which indicated a certain “bring it, I can duck it” attitude, is only thing he did that I found…well, half-appealing.

The most recent CNN/SSRS poll says former vice-president Joe Biden (reliable comfort factor, gaffe-y, neck wattle) is still way in front of other prospective Democratic presidential contenders. Now at 30%, Biden is 16 points ahead of Bernie Sanders, who ran nobly and bravely in ’16 but won’t be happening in 2020…he didn’t do well with POCs in ’16 and nobody wants a president who’ll turn 80 in his first year in office. That leaves the surging Congressperson Beto O’Rourke (9%), significantly ahead of Sens. Cory Booker (5%) and Kamala Harris (4%) and way ahead of Sen. Elizabeth Warren (3%). 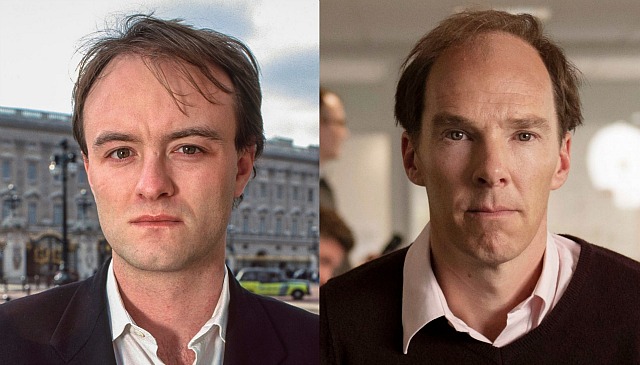 Hollywood Elsewhere has almost no issues with the winners of the 2018 Boston Online Film Critics Association film awards, and in fact applauds the top two decisions — the Best Picture prize going to Lynne Ramsay‘s You Were Never Really Here, and the Best Director award to Ramsay. Ditto the Best Actor and Best Actress trophies going to First Reformed‘s Ethan Hawke and Hereditary‘s Toni Collette.

Best Supporting Actor: Richard E. Grant, Can You Ever Forgive Me?

I can’t be bothered to type out the rest; it’s all available on BOFCA’s website.