Brian Wilson’s “Wouldn’t It Be Nice?”

I know this’ll never happen for the same reason that cowardice doesn’t require a conspiracy — it just comes naturally to so many. But it would be so wonderful if Green Book fans within the Academy, guilds, HFPA and BFCA would quietly resolve to vote for Peter Farrelly’s film in order to send a nice, big, friendly “kiss our collective ass” message to the woke thugs in the film critic community.

Not because it’s necessarily the best film of 2018 (although it may be that to some), but because it’s clean and confident and very well made — a genial film that knows exactly what it’s doing and why and, despite what the p.c. take-down crowd has written, isn’t guilty of any significant crimes. It has a good adult heart, and feels like sublime anti-Trump medicine while you’re watching it.

In other words, a vote for Green Book could, with the right collective adjustment of attitude, be understood as a vote of solidarity with all the Joe and Jane Popcorns out there who despise politically correct culture.

“Last fall, when I first saw this racially themed 1962 buddies-with-nothing-in-common road movie, I thought it had a clear chance to win best picture. It’s that kind of finely etched and wittily sincere lump-in-the-throat liberal crowd-pleaser. But its politics, in the eyes of some, are tainted by (it is argued) a certain patronizing quaintness that has lived past its cinematic sell-by date.

“So what will it mean if Green Book emerges from all that and wins anyway? It will mean not just that the movie strikes a powerful comedic-dramatic chord, but that the more traditional voices of Hollywood want the world to know that this is the sort of middlebrow humanistic movie that still resonates with them. It would represent, in many ways, a vote against the new wave of Academy members.” 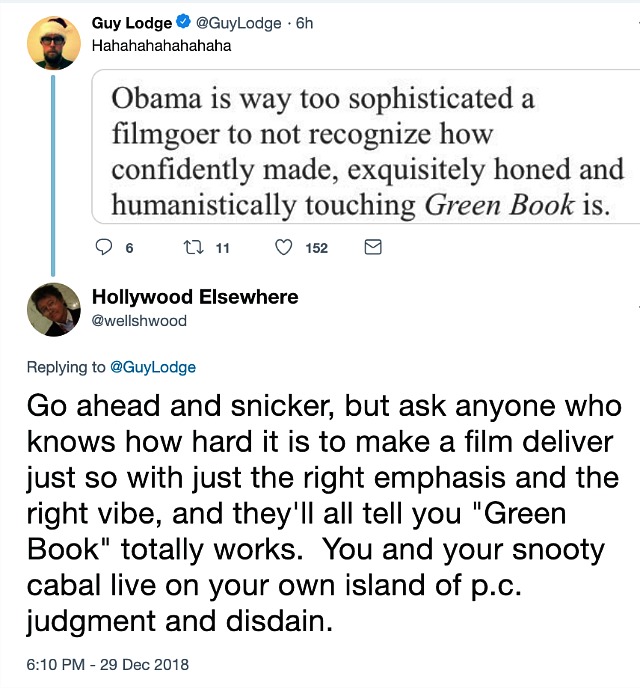 From “Roger Corman’s ‘The Terror’“, posted on 11.10.18: “If there’s one overriding conviction out there in Bumblefuckland it’s that the p.c. comintern is about fickle sensitivity, arch finger-pointing and instant Twitter lynchings. So much so that Average Joes not only felt sorry for the repulsive Brett Kavanaugh but doubled-down on their loathing of coastal elites by electing some seriously toxic righties a few days ago. Urban libtards are so despised that a sizable chunk of America supports Trumpian Mussolini culture as a bulwark against progressive upheaval.

“And yet Hollywood decision-makers, forced or obliged or seriously committed to accommodating themselves to p.c. changes, are ironically tasked with creating diversionary dreamscapes for people who despise the very ground they walk upon. Or something like that.”