Last night I caught a special little screening of Amazing Grace, the nearly 47-year-old Aretha Franklin gospel concert doc, at the Park Avenue screening room. It was hosted by producer-savior Alan Elliott and director Spike Lee, a huge fan of the doc who’s trying to generate interest in hopes of landing a nomination for a possible Best Feature Documentary Oscar.

Amazing Grace has qualified itself with two recent theatrical bookings, one in Los Angeles and another at Manhattan’s Film Forum. The latter booking is totally sold out so I’m glad I was able to attend.

Filmed over two nights (Thursday, 1.13.72 and Friday, 1.14.72) inside L.A.’s New Temple Missionary Baptist Church (So. Broadway near 87th Place), Amazing Grace became an unfinished calamity when it became clear that director Sydney Pollack and his crew had captured 20 hours of footage without shooting clapper boards at the start of each take, which in the analog era made the footage impossible to synch in post. 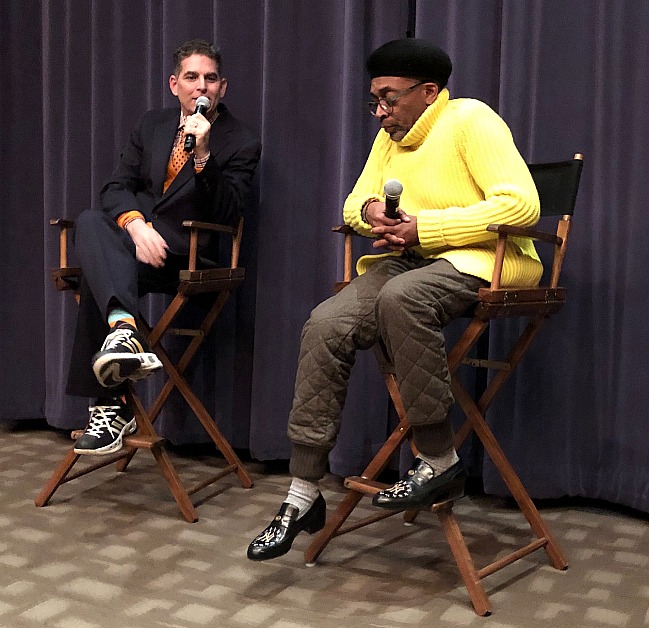 How Pollack, who’d been directing features for six or seven years at the time, could have failed to realize that clapper-boarding was essential is one of the all–time great Hollywood mysteries. Maybe he felt it was more important to be unobtrusive — maybe he felt intimidated by the spiritual vapors and didn’t want to get in the way.

Elliott is the music-industry guy who eight or nine years ago finally synched the footage with digital technology. And yet despite this resurrection Franklin, who died from pancreatic cancer last August at age 76, was curiously opposed to letting the film be commercially released. Or even screened at film festivals. She legally prevented Telluride Film Festival showings in both 2015 and ’16.

After Franklin died her estate agreed to let the film be shown. Neon will distribute sometime in early ’19.

Amazing Grace is just as spirit-lifting as the early-birds have been saying. Classic rhythmic bass-throbby gospel, churning and turning and cranking it up…”Oh, my…oh, yeah! Oh, my…oh, yeah!” (That might have been my own private chorus.) I’ve been listening to Franklin’s singing all my life, but to watch her improvise and embroider and work through a song top to bottom, little beads of sweat covering her face and neck, her concentration fierce and unwavering — pure flight, pure emotion, pure reach-for-the-skies.

Franklin is supported by top-tier pros…maximum energy, discipline, coordination. The barrel-chested Rev. James Cleveland (who died at age 59 in 1991) at the piano. The Southern California Community Choir, led by Alexander Hamilton. And Franklin’s superb backup band — guitarist Cornell Dupree, bassist Chuck Rainey, drummer Bernard Purdie, organist Ken Lupper, conga player Pancho Morales — is as good as it gets. They were a kind of Wrecking Crew-plus; Elliott said last night they were the session guys for the 1962 recording of the Four Seasons’ “Sherry.”

The bass-heavy soundtrack sounded analog-y. You could almost hear the tape hiss. It did wonderful things to my rib cage.

Oh, and there are two or three shots of Mick Jagger and Charlie Watts clapping along from behind the back row. Exile on Main Street had been recorded at the time, but was yet to be released. Sticky Fingers had been in circulation for eight or nine months.

Amazing Grace should obviously, definitely be Oscar-nominated. With a 47-years-in-the-making narrative and arriving only four months after Franklin’s death, there doesn’t seem to be much doubt about this.

The IMDB’s claim of a 120-minute running time is incorrect; reviews have reported 87 to 90 minutes. I’m siding with the reviewers.

Elliott and Lee did a q & a after the screening. I captured about ten minutes’ worth on the iPhone.

When the subject of Oscar attention came up, Spike sounded a little bit ambivalent. He mentioned his heartbreak about Driving Miss Daisy having won the Best Picture Oscar over Do The Right Thing, “like it happened yesterday.”

After the q & a ended I asked Spike if he’s seen Green Book, which some have incorrectly said is similar to Driving Miss Daisy. He said he hadn’t.