I May Have Avoided “Cabin Boy”

Or I may have watched a half-hour’s worth before discreetly slipping out of the screening room. Or I may have seen the whole thing and then discharged it from my memory. This morning I watched a couple of clips (I love the David Letterman scene). The fact that I can’t recall says something in itself. Ditto the fact that the cover of Kino Lorber Bluray describes Cabin Boy as “the contentious classic that angered a nation.”

I was, however, somewhat taken by Michael Tedder’s 12.5 Ringer piece, “The Beautiful, Inspirational Disaster of Cabin Boy, 25 Years Later.” Here’s the best portion:

“Though flawed, Cabin Boy is a cinematic experience like nothing else, and one that has been extremely important to the development of American comedy. 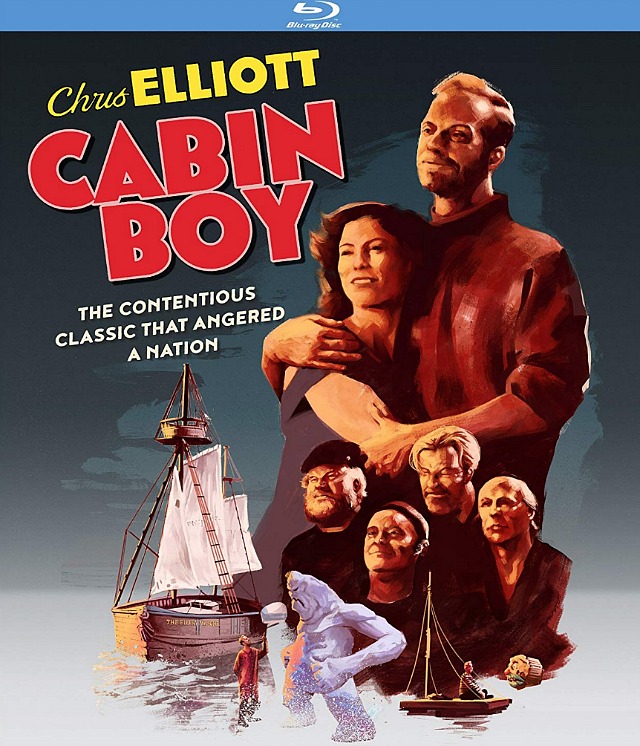 “It looks and feels wrong in a great way, in a way that a more technically accomplished director could never hope to achieve, much as no conventionally ‘great’ singer could ever hope to match the raw emotion of Daniel Johnston’s ‘Some Things Last a Long Time.’

“[And} Elliott gives a fully committed performance, nailing the stunted man-child archetype years before Will Ferrell would popularize it, and using his posture and awkward gait to fully sell Mayweather’s metamorphosis into a Cabin Man.

“The careers of Elliott and Resnick are a synecdoche for American comedy’s evolution in the past several decades, widely under-appreciated but key to the development of what would become known at alt-comedy. In the ’80s, they helped David Letterman’s knowing detachment become the accepted language of smart-asses everywhere, often providing his show with the loopy hostility the host was too dry to provide himself.

“With their early-’90s TV show Get a Life, they took part in the beginning of the sitcom’s evolution from a provider of mass-market repetitive comfort to an engine of rapid-fire absurdity aimed at a boutique audience, a model that shows like 30 Rock would benefit from. And with Cabin Boy, they incepted the idea that a joke didn’t have to make sense to be hilarious—in fact, it could be funnier if it didn’t.”