Thanks to Ankler editor Richard Rushfield for chatting me up yesterday afternoon. And thanks to Mrs. Fields cookies for sponsoring! How does Hollywood Elsewhere actually feel about Mrs. Fields? I love the idea of cookies or cupcakes or anything in that realm, but two seconds after taking a bite of anything fattening I’m immediately filled with guilt and remorse. So HE unequivocally endorses the idea of eating Mrs. Cookies cookies, but no more than that. A delicious thing to contemplate if not actually embark upon.

Description-wise, I would politely dispute Rushfield’s notion that I’m “the most dangerous man in movie blogging” and replace that with “the most”…I don’t know, “curiously individualistic, idiosyncratic, gut-impulse, conventional-wisdom-disputing blogaroo”…something like that.

My other correction is that Clint Eastwood’s The Mule, which I saw last night, is not “shock humor-heavy.” That idea was conveyed by a guy who posted on a Clint Eastwood fan site. The Mule is jocular in the way Clint’s old-guy character tosses off insensitive, politically incorrect racial terms and other old-guy inappropriate-isms, but the tone is not satirical.

The Mule is basically a sincerely-told saga of an old guy coming to terms with his shortcomings as a man who’s always selfishly preferred work over family, etc. It’s an entirely decent film in this respect. Yes, Warner Bros. publicists have gone with a minimal, semi-hands-off approach because they’re concerned about potential adverse reactions to the offensive dialogue, but it’s a respectable film overall, and a well-structured one to boot. 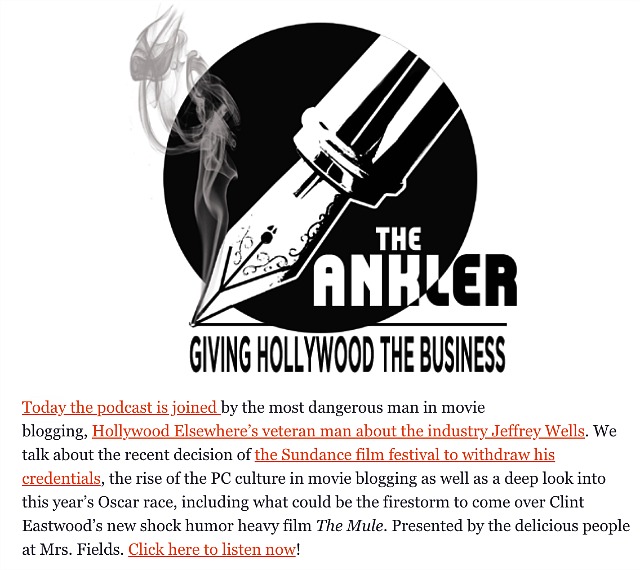 December 12, 2018by Jeffrey Wells23 Comments
« Previous post
What Happened to Regina King?
Next post »
Letter to Sundance, You Bet