Sundance Trump vs. HE Acosta

At the risk of boring the regulars, HE’s legendary Sundance disenfranchisement has happened in two stages. Two years ago Sundance decided to withhold the Press Express Pass they had very generously allowed me to use for five years straight (Jan. ‘12 to Jan. ‘16) and demote me to grunt status. I was also given a grunt press pass last year.

And then a few weeks ago they zotzed me altogether out of press-pass accreditation. For the first time since 1993 (or was it ‘94?) I’ll be A Man Without A Sundance Press Pass.

I’m re-stating this to officially announce that I’ll be attending anyway and catching what I can through the good graces of publicist and producer pallies.

At least I’m good with the Slamdance gang and will be able to catch Steven Soderbergh‘s High Flying Bird, among other Slamdance attractions. 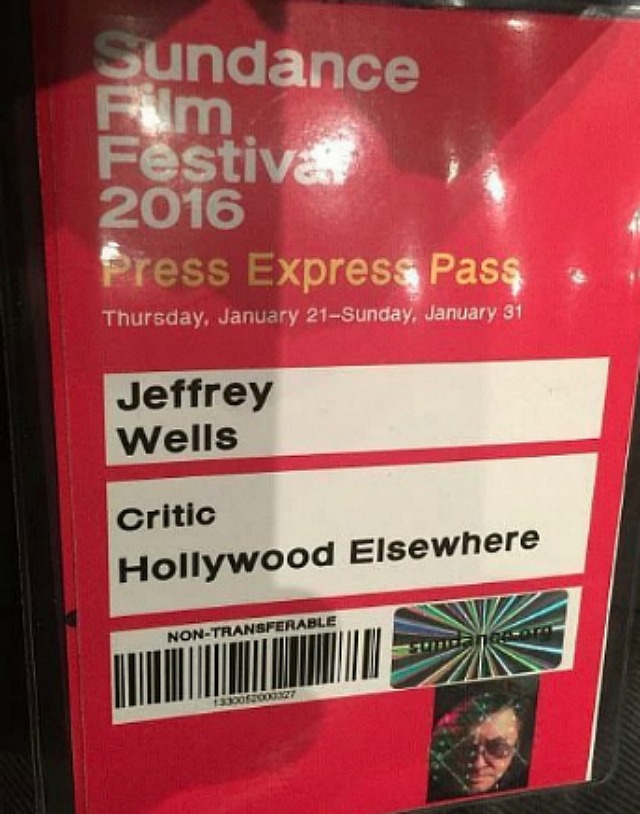 I trust we’re all in favor of an egalitarian press-pass approval process. Like Toronto began to do in earnest last September, Sundance is trying to spread press-pass access evenly and liberally, giving passes to younger critics, POC critics, woman critics, gay and trans critics…generally lowering barriers, opening the doors and trying to breathe with the times.

In line with this, I was informed last night that a certain midwest blogger who’s never been to Park City before is not only good for a Sundance ‘19 press pass but approved for an Press Express Pass — i.e., the kind of pass that for years has been de rigueur for Owen Gleiberman, Todd McCarthy, Eric Kohn, Anne Thompson, Kyle Buchanan and others at the top of the heap, given their general prominence and years of shrewd, diligent reviewing, industry assessments and backing from major print or web publications.

What does this tell us about where Sundance is at this year? Blowing me off entirely after attending and reporting on Sundance festivals for 25 years and yet giving a novice first-timer a coveted Press Express Pass? This is what a “woke” festival walks and talks like in The Year of Our Lord 2019.

I’m just glad, given the cultural currents of our times, that the good people behind the Toronto, Cannes, Telluride, Berlin, New York, Slamdance and many other festivals subscribe to a different attitude and philosophy.

An editor responds: “Can anyone imagine Cannes, Berlin or Venice Festival doing this to any accredited journalist without any explanation/reason? What is the change in Wells’ work/reporting/writing status that would justify this ‘demotion?’ (Note: If it’s because he got older, I believe that’s called age-discrimination and it’s against the law.)

“Which leads to a key point I may have missed: Has anyone ever explained ‘why’ someone who helped construct the Sundance mythology over the past decades is now being punished and pushed aside? As in ‘your press pass has been revoked because you…?’

“So we now have Jeff Wells starring as Josef K.? Except this hemp-fabric brown shirt yarn is infinitely more entertainingly low-rent sci-fi than Kafkaesque.

“I guess this whole story is (a) Logan’s Run for those who take American indie self-mythology seriously. Jeff’s usefulness sell-by date tattoo is glowing and the authorities need to capture him before he gets to Slamdance.

“Or it’s (b) and the ‘It’s a Good Life’ Twilight Zone episode with John Cooper as Billy Mumy sending Jeff into the cornfield.

“Or it’s c) Soylent Green for film nerds and Jeffrey is Edward G. Robinson, placed on a gurney in his hospice room surrounded by giant images of Kevin Smith movies as he sheds his mortal coil (without a press pass).

“The great culling that was prophesied has now begun.”

HE to editor: There was no honest ‘because’ letter. They just offered some bullshit about there being a great number of applicants and a limited number of press credentials, etc.

A colleague: “They are reacting to the various criticisms Wells has lobbed their way, and figure they shouldn’t enable him to continue doing so. That’s my best guess. Not saying it’s right or wrong. But they’re doing it because they can.”

HE to colleague: My “various criticisms” boiled down to one criticism over the last two Sundance fests (’17 and’18). That criticism was that Sundance is more and more becoming an instructive “woke” fest and concurrently seems to be at least partly veering away from the “search for exciting indie cinema” festival that it was for the last two and a half decades. That’s pretty much it, all in.

Sasha Stone comments: “We’re all so afraid of everything in Woketown, USA that no actual journalist will confront this story in any meaningful way. Why? They don’t want the hive to go after them and potentially be smeared, and then one day as a possible result have their own credentials revoked. Good times! Ah, the death of actual journalism. It was nice while it lasted. Perhaps it died with David Carr, who would have been all over this.”