In Stanley Kubrick‘s Paths of Glory (’57), Kirk Douglas played a French military officer who defends four French soldiers accused of cowardice under fire, and who were facing a death penalty. The film was shot in Bavaria, Germany. Four years later Douglas repeated this experience. In Gottfried Reinhardt‘s Town Without Pity, which was also shot in Bavaria, Douglas played a military officer who defends four American G.I.’s accused of raping a local girl, and who were also facing a death penalty.

Kubrick’s film is brilliant, of course — arguably the finest anti-war film of the 20th Century. And it boasts one of Douglas’s best performances. But the first two-thirds of Town With Pity, which I streamed this evening, are rough going. It’s basically a crude and rather cruel exploitation film — clunky dialogue, on-the-nose acting, a leering tone, occasional passages that feel almost amateurish.

The last third, however, is shattering. The rape victim (played by the late Christine Kaufmann) is put through the ringer and essentially raped a second time during Douglas’s cross-examination. The pitch-black finale is delivered straight and cold, over and out. 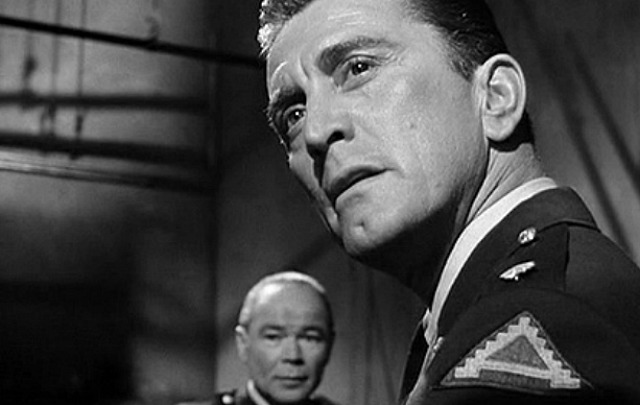