Two years ago the Sundance Film Festival withdrew my beloved Express Pass, which I was honored to carry for five straight festivals (’12 thru ’16) and by which I had easy access to screenings and therefore some extra, extremely valuable writing time. I was initially devastated but I gradually adjusted to grunt status during the ’17 and ’18 festivals. But now the Sundancers have really lowered the boom. Two days ago they told me they’ll be “unable to accommodate your request for press credentials at [the 2019] festival.”

Seriously — they actually said that.

I’ve been “going out” with Sundance for 25 years, and suddenly we’re done? I’ve been attending Sundance festivals each and every year since ’93, and if memory serves I filed a New York Post story about Robert Redford‘s launching of the Sundance Institute way back in ’80. A quarter century’s worth of round-trip plane tickets and condo rentals and hobnobbing and working my tail off to see and review everything…two and a half decades of wearing that cowboy hat and working and wailing and watching the history of independent film unfold in the snowy Wasatch mountains.

Has any other longterm Sundance veteran been told to take a hike after 25 years of devotion? I doubt it. Can anyone imagine the Cannes Film Festival guys doing this? I think this is fairly historic on some level. It’s been nice, Jeff, but that’ll do…we don’t like you any more. 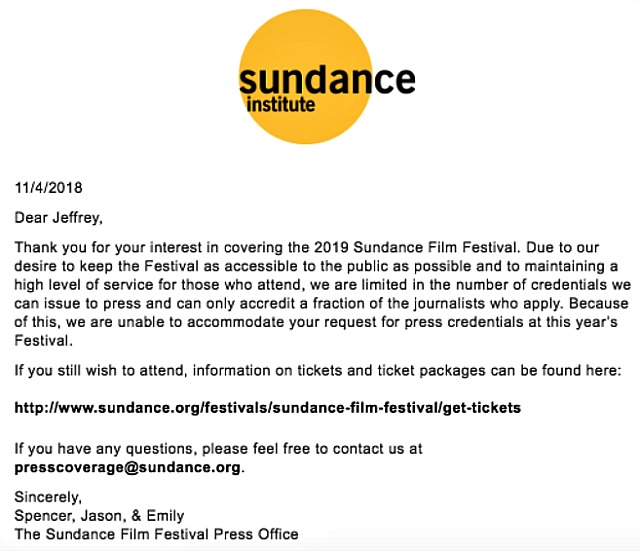 I’ve been advised by journalist friends to let this go and just attend next month’s festival without a pass, and basically mooch tickets from publicist pals. Which I may do. But this is an instructive moment that tells us a little something about the punitive mindset of the cabal that’s running Sundance these days.

For this is clearly a censorious and illiberal response to my having written critical riffs about the matters near and dear to wokeness. I’ve lamented the off-with-their-heads Robespierre mentality within the #MeToo movement. I’ve stood by Woody Allen and particularly Moses Farrow. There exists, I gather, a suspicion that I’m not sufficiently supportive of woman filmmakers, which I’m sure will come as a surprise to Kathy Bigelow, Marielle Heller, Jennifer Kent (nobody worshipped The Babadook more than myself), Andrea Arnold, Sarah Polley, Lynne Ramsay, Sofia Coppola (whose direction of Somewhere reminded me of classic-era Michelangelo Antonioni), Ava DuVernay (whose Middle of Nowhere I flipped over six years ago) and Olivia Colman (whose performance in Tyrannosaur I found so devastating that I raised money to pay for press screenings that Strand Releasing wouldn’t spring for).

And it’s possible, I suppose, that my having called last year’s festival a “socialist summer camp in the snow” rubbed them the wrong way.

I’m not going to offer any sweeping judgments about the recently announced 2019 Sundance Film Festival slate, except to suggest that with a competition slate that is 53% female (i.e., nine of the 17 directors eligible for the festival’s top prize are women) it would appear that 2019 Sundance is going to be just as progressive-minded as last year’s festival, if not more so.

But even with the currents of p.c. instruction every Sundance delivers at least four or five knockouts, and the 2019 crop seems like it might be a little better than normal.

I’ve naturally written an appeal to the Sundance press office, and have been told they may change their minds.

“I’m almost certain they will accept your accreditation in the end,” a colleague writes.  “I know bloggers whose sites barely get a few clicks a day, and they’ve gotten accredited for next month’s festival. There’s no way they can do this to you. If anything, I see this as them sending you a message to stop the criticism of their program. Which is, of course, incredibly dictatorial and against what freedom of the press is all about…censorship-level stuff.

A seasoned colleague: “Ask for advice and you just might get it. Ignore it if you must.”

What do you mean “ask for advice?”, I replied. “Social tips about how to sound more woke? Writing tips about how to write a properly woke-sounding review? This is straight out of Invasion of the Body Snatchers. The seed pods have been delivered on a flatbed truck and you’re saying ‘go along, don’t make trouble, resistance is futile, if you only knew how good it feels to surrender and join them….all your cares and woes will just evaporate.'”

Seasoned colleague response: “You don’t have to go to Sundance, cover Sundance, or get their permission to cover it if you want to. What you want to do is get them to do what you want them to do. And that may not happen. Nobody is rolling over you. If they don’t want you there, that’s their choice! You’ve given them plenty of reasons not to want you there. What do you want to do? Get them back or punish them in some way? The only thing you’ve got is your platform, so say what you will to your fans and followers.”

Every with-it film journalist worth his or her salt “wants” the Sundance press office to give them a press pass, so I’m hardly being egoistic or headstrong about this. I’m a steady and significant voice and have paid my dues and done a lot of good work over the years, and I’ve never missed a Sundance festival since the month of Bill Clinton‘s first inauguration.

Clearly the press office has a duty or obligation to approve new critics and keep things fresh and loose, but they also seem to be expressing a certain “either you’re with us or you’re against us” attitude. I seriously doubt that they’ve told other critics of my calibre and experience that there’s no more room at the inn. This is a political decision made with an intention of trying to weaken or nullify whatever noise or influence my essays and criticisms may have had. It’s censorship — plain and simple. They’re showing their Stalinoid colors.