I’ve always respected director-actor Vincent Gallo (The Brown Bunny, Buffalo 66). Partly for his acting, partly for his edge and ballsiness and blunt talk. A 57 year-old Republican and provocateur whose career has been slowing down over the last decade, Gallo has never seemed to care about behaving the way that people in this town want you to behave, especially these days.

A couple of days ago I came upon an apparently legit post on his website that indicates Gallo is still way, way out there. In a phrase, he’s offering his services to women who are rich enough to fork over $50K for a night of love and exotica. I don’t know how old the post in question is, but nothing I could offer by way of an introduction could properly suffice. It reads like a put-on, but I sense sincerity.

I’m calling Gallo’s offer “apparently legit” because it links to Gallo’s merchandise page, which links to his self-named website, which looks like it was designed in 1997. 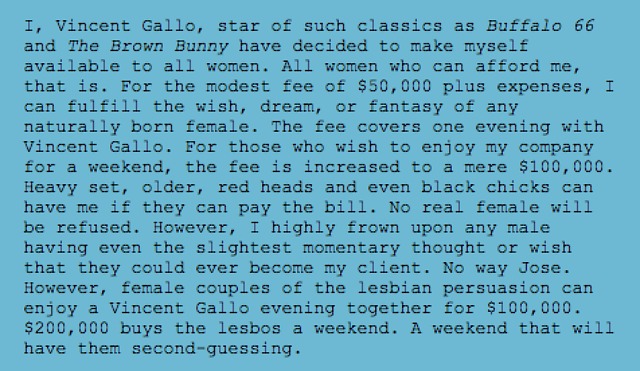 January 23, 2019by Jeffrey Wells23 Comments
« Previous post
Not That Much
Next post »
Close Enough To Taste It