Courtesy of CinnaJon, myself, Patrick Murtha, Spaceshiek, Jordan Ruimy and The Cinemaholic:

Cinnajon: “I had assumed Green Book was destined to be a Shawshank-like Best Picture also-ran, with middling box office, that takes on a second life when it hits cable. Now it sounds like the smear campaign may have provided an unexpected sympathy boost, which may buoy it to a much healthier first run than expected, if it remains in the driver’s seat. Wildly up-and-down trajectory to the finish line if this is how it actually plays out.

Jeffrey Wells: “Last night’s win was at least partly a sympathy vote after the vicious SJW attacks. I suggested a few weeks back that the industry should vote for Green Book in order to tell those odious lefty Stalinist bullies to go fuck themselves, and by golly that’s what partly happened! The p.c.-MOTIVATED haters started all the trouble, all the hate. Their post-GG takedown attempts amounted to pure viciousness and ugliness. Last night the PGA told them ‘nice try, assholes, but no sale.’ Thank you, Inkoo Kang! Thank you, David Ehrlich! Thank you, Indiewire p.c. comintern!

Patrick Murtha: “Not only is this exactly right, Jeff, but I also suspect that 2019 is going to be a year of MAJOR backlash against the PC / SJW / woke crowd. Are you sensing this also? People are just getting fed up. It is perfectly possible to continue loathing Trump & Co. while also rejecting the wokesters.” 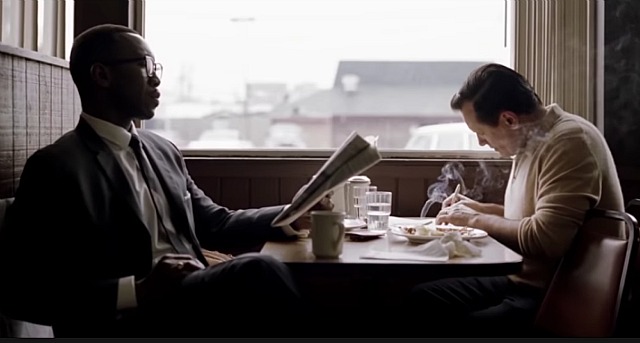 Spacesheik: “I loved Green Book — screw the haters. The audience I saw it with loved it as well (this was in November in an AMC theater at Tysons Mall, before all the hype). They enthusiastically clapped at the end. The film is highly entertaining, with some great performances all around. I’d watch it again. I was shocked when Peter Farrelly‘s name came onscreen, its the complete antithesis of everything he’s done before – and for that he deserves credit. You can dismiss whatever you want, but you can see the film was made with a lot of love and compassion towards that era and history.”

Wells response: “Check but Green Book wasn’t made with love and compassion ‘towards’ that era as much as with a frank attitude and acknowledgment that this was what the realm of 1962 was unfortunately like.”

Jordan Ruimy: “The fact of the matter is that Green Book is a crowd-pleaser like no other. All three times I saw it the audience applauded during the credits, which almost never happens. It has an 8.3 IMDB score, by far the highest of 2018 contenders and a much-coveted A CinemaScore. It has struck a chord with Joe and Jane Popcorn. The fact that it’ll spread into an additional 1000 theatres next week could make the case for it louder and clearer.”

The Cinemaholic: “I love Green Book but the PGA win is actually going to do more harm to film’s chances than good. The woke crowd is going to tear the film to pieces. I am waiting for Oscar nominations to see how it does there. If Farrelly and Vallelonga get nominated, you know that all the p.c. journalists will have a big meltdown again. Anyway, all this is so much fun. And yes, A Star Is Born is over. Roma will win Best Picture (as I have been maintaining since September).”

CinnaJon: “It seems like it’s already run the gauntlet of being torn to pieces, and is now emerging on the other side stronger and more embraceable than when it first entered the fray. The film could be the beneficiary of people reaching an exhaustion point with outrage culture. Voting GB is a pushback to all that.”