8:16 pm: The glorious shutdown of A Star Is Born continues as Bohemian Rhapsody‘s Rami Malek wins for Best Actor! Hollywood Elsewhere is howling, whoo-hooing, rolling around the floor, slapping the thighs. “Thank you to Freddie Mercury!” But Malek didn’t thank Bryan Singer at all? Bohemian Rhapsody was Singer’s story, in a way. He channelled all of his life as a bad boy into Freddie’s character. It’s his mea culpa. It’s one thing to not mention an alleged sexual predator when you’re worried about losing, but after you’ve won…? Not even a minor mention? 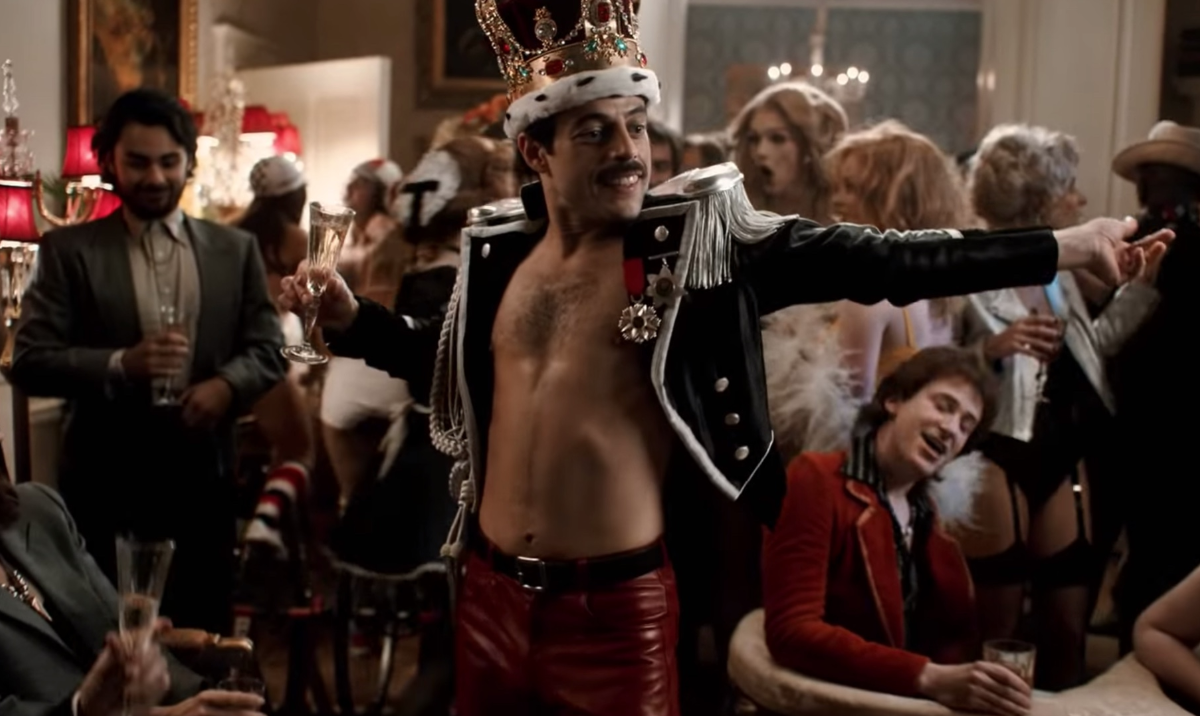 8:05 pm: Lady Gaga HASN’T won the Golden Globe for Best Actress, Drama! The great Glenn Close wins instead! Amazing! Does this portend a corresponding Best Actor loss by A Star Is Born‘s Bradley Cooper? I’m hyperventilating, experiencing convulsions, having trouble breathing. Gaga has lost! Bobby Peru, this is for you!

7:56 pm: Green Book wins for Best Film, Musical or Drama. Are Robert Strauss and other like-minded critics red-faced and fuming as we speak? Maybe, maybe not. But I’d like to think so. Three Golden Globes for this very finely made film — a feel-good road dramedy that HE is proud to have praised and stood by through thick and thin. This is HE’s feel-good moment.

7:48 pm: HE’s own Olivia Colman (dead brilliant in Tyrannosaur) wins for Best Actress, Comedy or Musical for The Favorite. HE agrees, approves, applauds.

7:37 pm: Assassination of Gianni Versace wins for Best Limited Series or TV Movie. Fine. Never saw it. I will now. 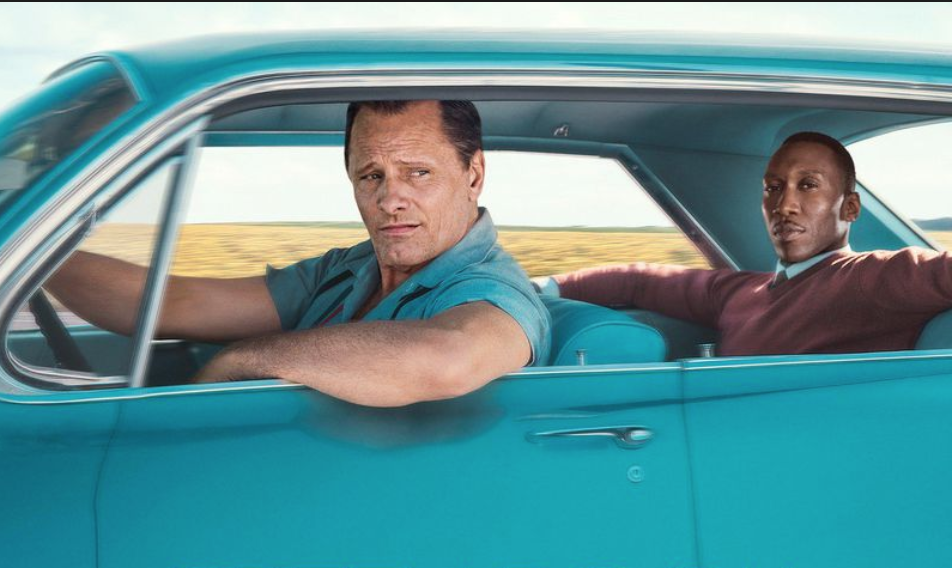 7:17 pm: Harrison Ford presents the Best Director award to Alfonso Cuaron. Which is a good thing because (I know this is going to sound small and mean) at least Bradley Cooper didn’t win. But it is good, I think, that A Star Is Born isn’t sweeping because ASIB is not an original film that comes from the culture that we’re all living and struggling in. And (forgive me) it does seem to increase the possibility that Cooper won’t win for Best Actor. Be honest — Cooper didn’t look overjoyed when Alfonso won.

7:08 pm: El Duderino is given the Cecil B. DeMille award. The career reel covers everything, but was there a clip from Stay Hungry (’76), one of his all-time greatest? A special thanks is offered to Peter Bogdanovich, the Coen brothers, Scott Cooper, “the late great Michael Cimino,” etc. Great quote: “We’ve all been tagged….we’re all here, all alive!” 2nd Great Quote: “We’re all trim tabs! Tag…you’re it”

6:56 pm: Tyler Perry asks, “Are the people at the Golden Globes as drunk as they seem? Yes, they are.” Darren Criss wins for his performance in The Assassination of Gianna Versace. Verdict on that floral tux jacket he’s wearing?

6:32 pm: Mahershala Ali wins Best Supporting Actor for Green Book! HE agrees, approves, applauds. It would have also been nice if Richard E. Grant (Can you Ever Forgive Me?) had won but Green Book is close to my heart. And now the Green Book screenplay has won! So Green Book is going to win for Best Film, Comedy or Musical…great. I’d like to think that at least a few of the p.c. tyrants who went after Green Book on twitter are grinding their teeth and punching their refrigerator doors as we speak. Feels pretty good on this end!

6:18 pm: Regina King wins Best Supporting Actress for If Beale Street Could Talk. So now she’s back in the Oscar conversation? The fact that she was absent from the SAG noms indicated otherwise. Regina pledges that everything she produces over the next two years is going to “be 50% women”…okay!

6:12 pm: I hate these Walmart commercials — hate, hate, hate. I generally avoid the Walmart experience like the plague, but now my determination to steer clear is doubled down. I kind of hate the Die Hard-ish Brooklyn Nine-Nine trailer also — no offense.

5:57 pm: The legendary Carol Burnett looks pretty good. Great pipes in her prime. Tribute reel is nicely assembled. I’d forgotten about Friendly Fire (’79). “How incredibly fortunate I was top be there at the right time…the cost alone…48-piece orchestra…so grateful for the chemistry we had…our producer, our choreographer, our writers….one big happy family for 11 years (’67 to ’78)….I’m so glad we had this time together.”

5:20 pm: Am I expected to know or care about Richard Madden winning winning Best Actor blah-dee-blah for Netflix’s The Bodyguyard? I don’t. I never will. Well, probably not. FX’s The Americans win for Best TV series, Drama….zzzzz. Secret Life of Pets 2 trailer…I hate animation with such a grand and terrible passion. Image quality on the Roma trailer looks so much better than the film did at the Aero the other night.

5:20 pm: SpiderMan: Into the Spider-Verse wins for Best Animated Film. Who’s the woman with the extremely styled hair behind the winners? Former Sony chief Amy Pascal.

5:16 pm: Michael Douglas wins Best Actor, TV Series, Musical or Comedy, The Kaminsky Method. “Chuck Lorre thinks getting old is funny.” “This has to go for my 102-year-old father Kirk…”

5:08 pm: Hollywood Elsewhere apologizes for the modem fritzing out, killing the cable signal. It took about six or seven minutes for everything to boot up again. 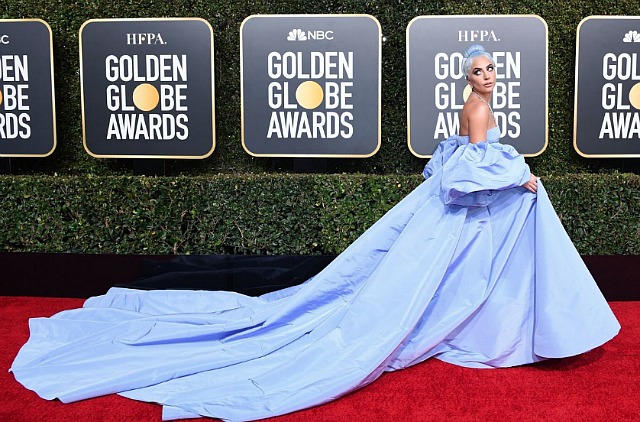