“Nicole Kidman is indeed remarkable [in Destroyer], as rumor suggests, but mainly because you can’t stop remarking her. It’s an over-cover performance in an undercover role. Though aiming to blend in, she’s so dramatically busy that she ends up sticking out, like a chameleon who’s praying for an Oscar nod.

“The rule seems to be that the more makeup and prosthetics she piles on the more likely we are to cry out, in unison, ‘Oh, look, it’s Nicole Kidman!'” — from Anthony Lane’s review in the 1.17.19 issue of The New Yorker.

From “Pains of Hell,” my 9.1.18 Telluride review: “Destroyer is mostly about the way Kidman looks, like a combination vampire-zombie with dark eye bags and a complexion that suggests a heroin habit mixed with twice-daily injections of embalming fluid. Plus a Desolation Row, gray-streaked hair style. It’s also about the whispery way in which she speaks. I swear to God I missed over half of her dialogue.

“Kidman and Kusama are basically saying to us, ‘Have you guys ever seen such a badass, hardass undercover female cop in your moviegoing life? Even in a zombie movie?’ HE answer: No, I’ve never seen a cop character who looks this wasted, this dead-to-the-world, this gutted, this excavated, this George Romero, this Bela Lugosi-ish. Hats off.” 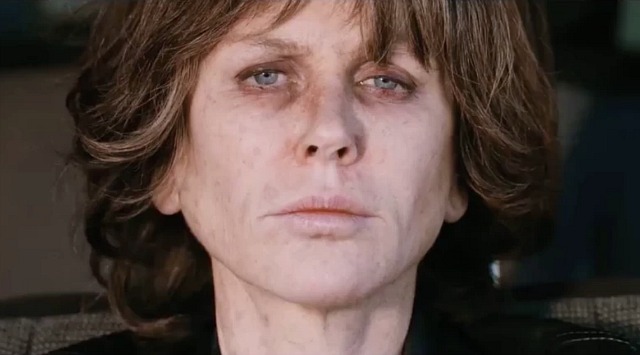