HE commenters “RossoVeneziano” and “Mr. F.,” myself, Mark David Chapman and Variety editor Steven Gaydos on the crash-and-burn scenario of Bradley Cooper‘s A Star Is Born, a justly admired and relentlessly promoted Warner Bros. release film that is now completely finished as a Best Picture contender, and the key role that Variety‘s Kris Tapley may have arguably played in helping to bring about its demise (i.e., in a water-poisoning, long-game sense).

RossoVeneziano: “ASIB officially being out of the BP race even before nominations are announced is something no one saw coming. Whatever you think of the movie I feel sorry for Cooper — biggest loser of the season.”

Mr. F.: “Warners is now frantically working through the weekend to finish drawing up their ‘DO IT FOR BRADLEY’ campaign.”

Jeffrey Wells: “A Star Is Born’s loss is Hollywood Elsewhere’s joy, partly because many in the industry listened to (or agreed with) my sensible advice that you can’t hand a Best Picture Oscar to a well-handled but formulaic remake of a remake of a remake. Good film, made lots of money, and that was enough. 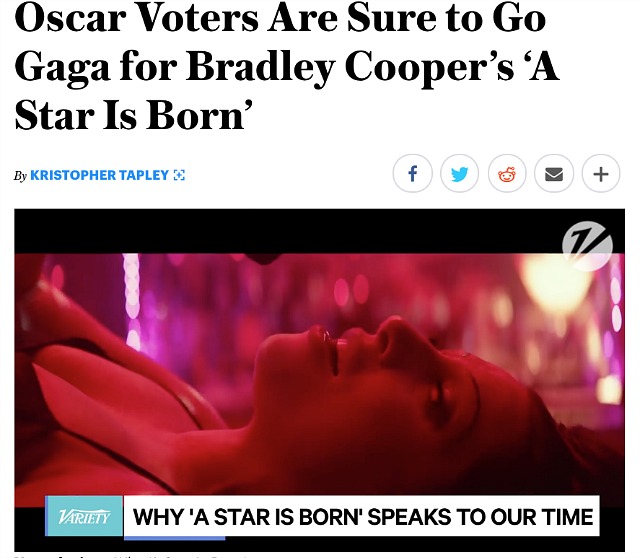 “If you ask me the other big loser in this morning-after realm is Variety’s Kris Tapley, whose ‘stand back because here comes a big multi-Oscar nominee!’ drumbeat article that ran before Toronto…if you ask me that piece poisoned the water with an aura of arrogance and entitlement — a Tapley trumpeting (WB publicists have shown me this knockout film early and I’ve been given permission to pass along the wonderful news) that proclaimed Bradley Cooper as the new king.

“HE was the only site anywhere that stood up to the WB hype machine with a piece that was bluntly headlined ‘Due Respect But ASIB Must Be Stopped.” Bobby Peru huffed and puffed, but thank God the industry mostly agreed with my view of things. Sometimes (not often but sometimes) things work out for the better.”

Steven Gaydos: “OK, let’s put this one to rest once for all. (I know, I know, in the obsessive-compulsive world of Jeff ‘Roma Man’ Wells, that never happens, but I’ll forge on anyway.) Here’s what my Variety colleague Kris Tapley ACTUALLY wrote a month before A Star is Born opened in theaters:

“‘Including best picture and director, where are we now? Nine nominations? A Star Is Born is an across-the-board Oscar contender. More than that, and assuming this is even still possible in the modern era, it has the muscle to achieve what only three films in movie history ever have: Win all five major Academy Awards (picture, director, actor, actress, and screenplay.’

“If you read his observations on Awards Season, which you, like Mark Chapman studying ‘The Catcher in the Rye’ and winding up in front of the Dakota, you clearly do, Kris clearly loves Roma as much as you do and he also loves Star is Born and he loves First Man and he loves Minding the Gap, etc.

“So he does what you’ve said a thousand times here that you believe should be done: he doesn’t mask his enthusiasm for the films he’s passionate about. But he also does something you should consider matching: he generally checks that passion at the door when it comes time for wisely, fairly and accurately surveying the Awards Season scene.

“In 48 hours we will learn if Kris is on the money or way off course in his prediction of 10 Oscar noms for Star is Born. I’m assuming he’s got it pretty damn straight. So where does this leave us?

“You’re in the tank for Roma. It’s your Cuaron man-love gone mad and your heart is fluttering at the thought that someone might stand in the way of gold for the sensitive artist object of your affections and you’ll slander, slam and poison the ham sandwiches of anyone who you see threatening a Roma triumph.

“I get it. I’m still upset The Counselor didn’t win best picture. The difference between me and you: I didn’t build a shrine to the film out of twigs and moth wings and then photograph it and then share it with my readers every frickin’ day of Awards Season.

“In my own humble opinion: Cinema Passion, si. Sock-sniffing, no.”

Jeffrey Wells response to Gaydos: I’m also in the emotional tank For Green Book, especially since the SJW haters began to pile on. If Green Book prevails at the end, Guy Lodge, Inkoo Kang and David Ehrlich‘s pain will be a source of everlasting ecstasy and rejoicing.

But try as you may, Steven, to characterize me as George Grizzard‘s character in Otto Preminger‘s Advise and Consent, I am not that nasty fellow. I am basically a humble Christian humanist in a cowboy hat who believes in honestly crafted emotional currents, except when delivered by Bradley Cooper.

A Star Is Born will collect more than a few Oscar noms on Tuesday morning, agreed. But as a potential Best Picture winner it’s FINISHED, and I’ve just now received a Movie Godz telegram saying that they agree with that assessment.