On The Collapse of “First Man”

From the get-go I was down with Damien Chazelle‘s First Man. I regarded it as a serious, ambitious film that deserved all good things that might come its way. But then it got drop-kicked by Joe Popcorn, and was soon after dismissed by the Oscar-season handicappers. Yes, me included. I didn’t change my mind or stop admiring it — I just candy-assed out when the box-office collapsed. What do you want me to do? Stand against gale-force winds? 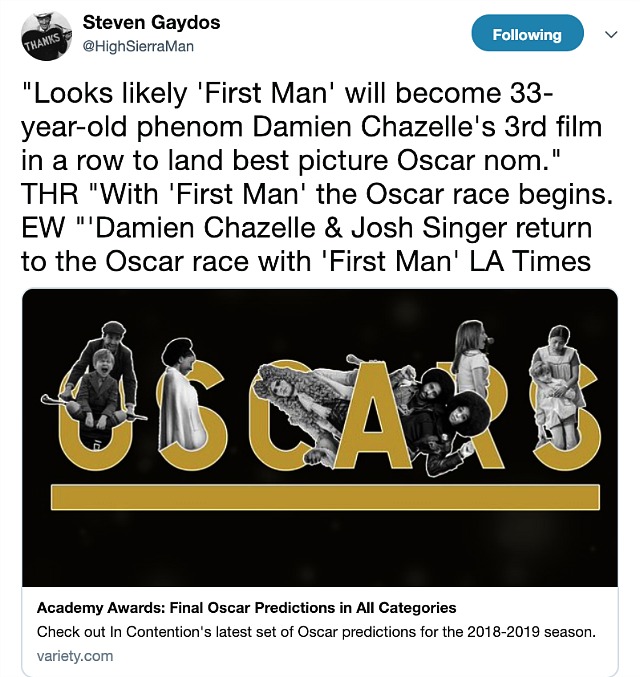 Filed from Telluride on 9.1.18: First Man is an intense, unconventional, psychologically penetrating take on the experience of Neil Armstrong (Ryan Gosling) and his wife, Janet Shearon (freckly-skinned Claire Foy, whom I last saw in Steven Soderberg‘s Unsane) from the early to late ’60s, culminating in the historic moon-landing mission of July 1969.

I was seriously impressed with First Man because it’s really quite different — a kind of 16mm art film approach to an epic journey, an intimate, indie-styled, deeply personal movie writ large and loud with a rumbling, super-vibrating soundtrack.

I agree with Owen Gleiberman‘s view that it’s the Saving Private Ryan of NASA space epics. The last 40 minutes or so (the 1967 fire tragedy to Neil and Janet’s post-mission meeting in an isolation area) are truly outstanding and suspenseful as fuck. It’s surely one of the measures of top-flight filmmaking that I was tense and worried about the success of a 50 year-old triumphant mission from 50 years ago.

Foy delivers the conventional emotional currents, particularly when she calls Neil on his emotionally constipated bullshit. But Gosling acts the hell out of Neil. Everything he does and says is very internal but you can read him in every scene. Don’t let anyone tell you that Foy owns this film — she does in an outwardly familiar sense but Gosling is doing something much braver and more intense in its own way.