David Leonhart‘s 1.5 N.Y. Times opinion piece, “The People vs. Donald J. Trump” (subhead: “He is demonstrably unfit for office — What are we waiting for?”) has attracted 2434 comments.

“The presidential oath of office contains 35 words and one core promise: to ‘preserve, protect and defend the Constitution of the United States.’ Since virtually the moment Donald J. Trump took that oath two years ago, he has been violating it.

“He has repeatedly put his own interests above those of the country. He has used the presidency to promote his businesses. He has accepted financial gifts from foreign countries. He has lied to the American people about his relationship with a hostile foreign government. He has tolerated cabinet officials who use their position to enrich themselves.

“To shield himself from accountability for all of this — and for his unscrupulous presidential campaign — he has set out to undermine the American system of checks and balances. He has called for the prosecution of his political enemies and the protection of his allies. He has attempted to obstruct justice. He has tried to shake the public’s confidence in one democratic institution after another, including the press, federal law enforcement and the federal judiciary.

“The unrelenting chaos that Trump creates can sometimes obscure the big picture. But the big picture is simple: The United States has never had a president as demonstrably unfit for the office as Trump. And it’s becoming clear that 2019 is likely to be dominated by a single question: What are we going to do about it?”

Answer: Besides making a lot of noise, not all that much. The Republican-controlled Senate will never vote to convict Trump on impeachment charges. The only way out is to defeat him in 2020, and the only way that’ll happen is for the Democrats to nominate an X-factor charisma candidate — somebody in the vein of JFK, RFK, Bill Clinton, Barack Obama, etc. In other words, the Dems have to christen Beto O’Rourke as their presidential nominee. Joe Biden is too old and ambivalent; Bernie Sanders is too old; Elizabeth Warren doesn’t have the voltage; Kamala Harris is too prosecutorial, etc. 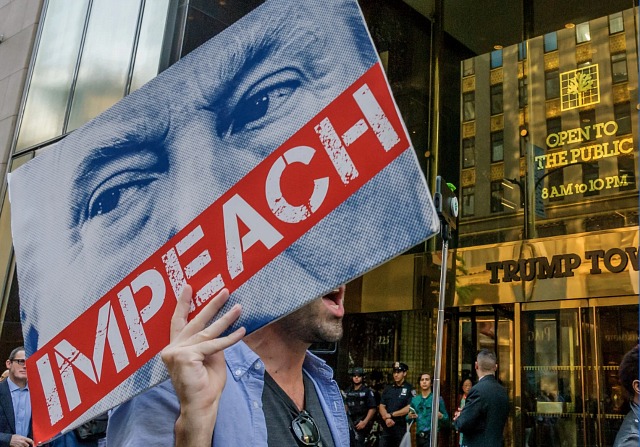