Sorkin Suggests Without Spitting It Out

We all know what Aaron Sorkin meant three days ago when he said (a) he really likes “the new crop of young people who were just elected to Congress”, but (b) “they now need to stop acting like young people, okay? It’s time to do that.” We know what he meant.

Sorkin meant that Democrats have to start conveying to Middle American bumblefucks that they’re not entirely about advancing the agendas of POCs, LGBTQs and Twitter lefties, and that they don’t necessarily believe that “white person” is an epithet, and that whiteys are not necessarily evil on a genetic basis.

We’re living in such an insane, loop-dee-loop world right now that the previous half-sentence (beginning with “they” and ending with “basis”) will, in the minds of some, be taken as proof that I’m a bad person. In fact I just don’t believe in necessarily demonizing Anglo Saxons as Satan’s emissaries on earth, which is pretty much what the SJW twitter wing of the Democratic party has come to accept as a given. 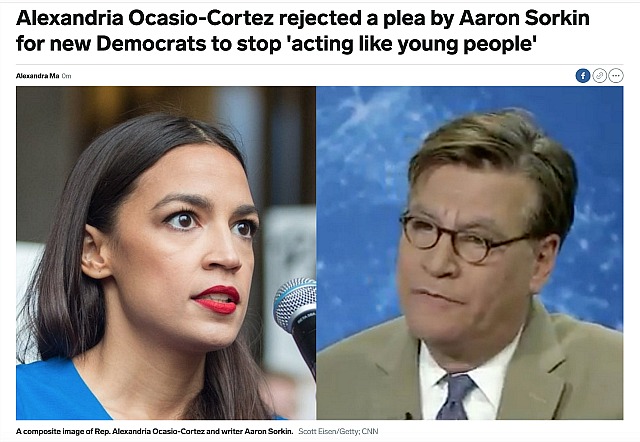 “I think there’s a great opportunity here, now more than ever, for Dems to be the non-stupid party, to point out the difference,” Sorkin said. “”We [have to convey that we] haven’t forgotten the economic anxiety of the middle class, but we’re going to be smart about this. We’re not going to be mean about it.”

From “Americans Strongly Dislike PC Culture,” an October 2018 Atlantic article by the Harvard-affiliated Yascha Mounk: “On social media, the country seems to divide into two neat camps: Call them the woke and the resentful.

“Team Resentment is manned — pun very much intended — by people who are predominantly older and almost exclusively white. Team Woke is young, likely to be female, and predominantly black, brown, or Asian (though white ‘allies’ do their dutiful part). These teams are roughly equal in number, and they disagree most vehemently, as well as most routinely, about the catchall known as political correctness.

“Reality is nothing like this. As scholars Stephen Hawkins, Daniel Yudkin, Miriam Juan-Torres and Tim Dixon argue in a report published Wednesday, ‘Hidden Tribes: A Study of America’s Polarized Landscape,’ most Americans don’t fit into either of these camps. They also share more common ground than the daily fights on social media might suggest — including a general aversion to PC culture.”

January 21, 2019by Jeffrey Wells66 Comments
« Previous post
Off To Park City Tomorrow
Next post »
How Will Kamala Harris Play In Peoria?