After many years of mystifying delay, a Bluray of This Gun For Hire will finally “street” on 4.9.19. The Amazon page indicates that the Shout Factory release will offer no supplements. 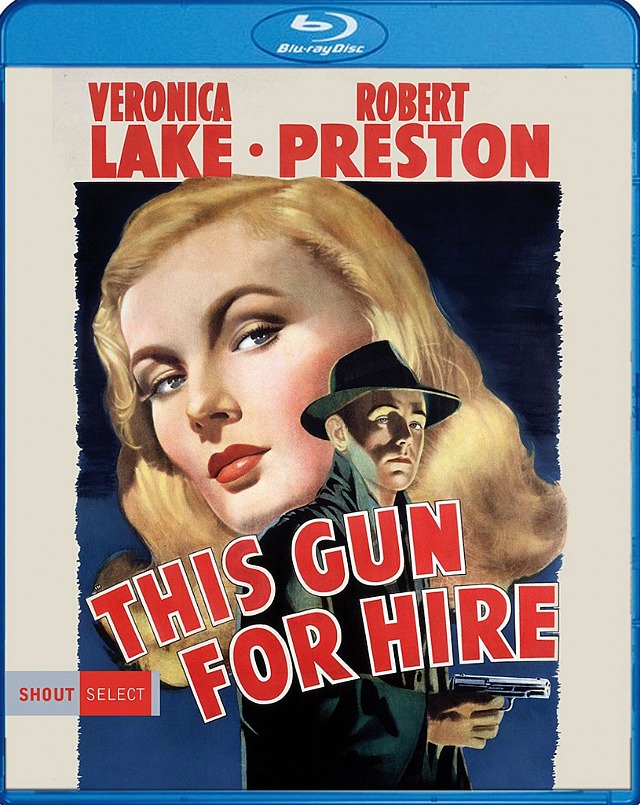 Posted on 8.26.18: Frank Tuttle‘s This Gun For Hire (’42) is a violent thriller, but with flavor. A combination of frostiness and vulnerability in Alan Ladd‘s Raven, a professional assassin, feeds into a vibe of brusque empathy and existential despair.

Released two years before Billy Wilder‘s Double Indemnity, I’ve always regarded This Gun For Hire as the first high-impact film noir. Which puts it into the pantheon of 1940s releases. Pretty much every film-loving dweeb subscribes to this view.

For some odd reason Universal has never released a Bluray or streamed it in HD. Here we are in 2018, and the only way to watch this still engrossing, hard-boiled drama is on that same shitty DVD Universal released 14 years ago.

Why don’t they get the lead out and remaster it? It would be fairly criminal to just let it remain a 480p experience.

“One shudders to think of the career which Paramount must have in mind for Alan Ladd, a new actor, after witnessing the young gentleman’s debut in This Gun for Hire… Obviously, they’ve tagged him to be the toughest monkey loose on the screen. For not since Jimmy Cagney massaged Mae Clarke‘s face with a grapefruit has a grim desperado gunned his way into cinema ranks with such violence as does Mr. Ladd in this fast and exciting melodrama.

“Keep your eye peeled for this Ladd fellow; he’s a pretty-boy killer who likes his work…Mr. Ladd is the buster; he is really an actor to watch.” — from Bosley Crowther‘s review of This Gun For Hire (’42).