Yesterday I received a Vanity Fair “Awards Extra!” supplement issue that seems — emphasis on the “s” word — to be the definitive 2019 “Oscars edition”. The issue is 76 pages and feels like an echo of what used to be, and the cover photo of the great Olivia Colman feels dull and pedestrian — no style.

Is this some kind of teaser, this thing? Will a real-deal Vanity Fair Hollywood issue publish in early February, or is this it?

Remember the years when the special Vanity Fair Oscar/Hollywood issues would be stuffed with ads, and with all the biggest stars posing in a big en masse fold-out? What happened to that swanky attitude, that “we own the world and everybody wants to join our club” vibe?

Remember when Annie Leibovitz was the default, blue-chip photographer for the super-stylish, cost-was-apparently-no-object, all-the-cool-kidz-of-Hollywood photo spread? 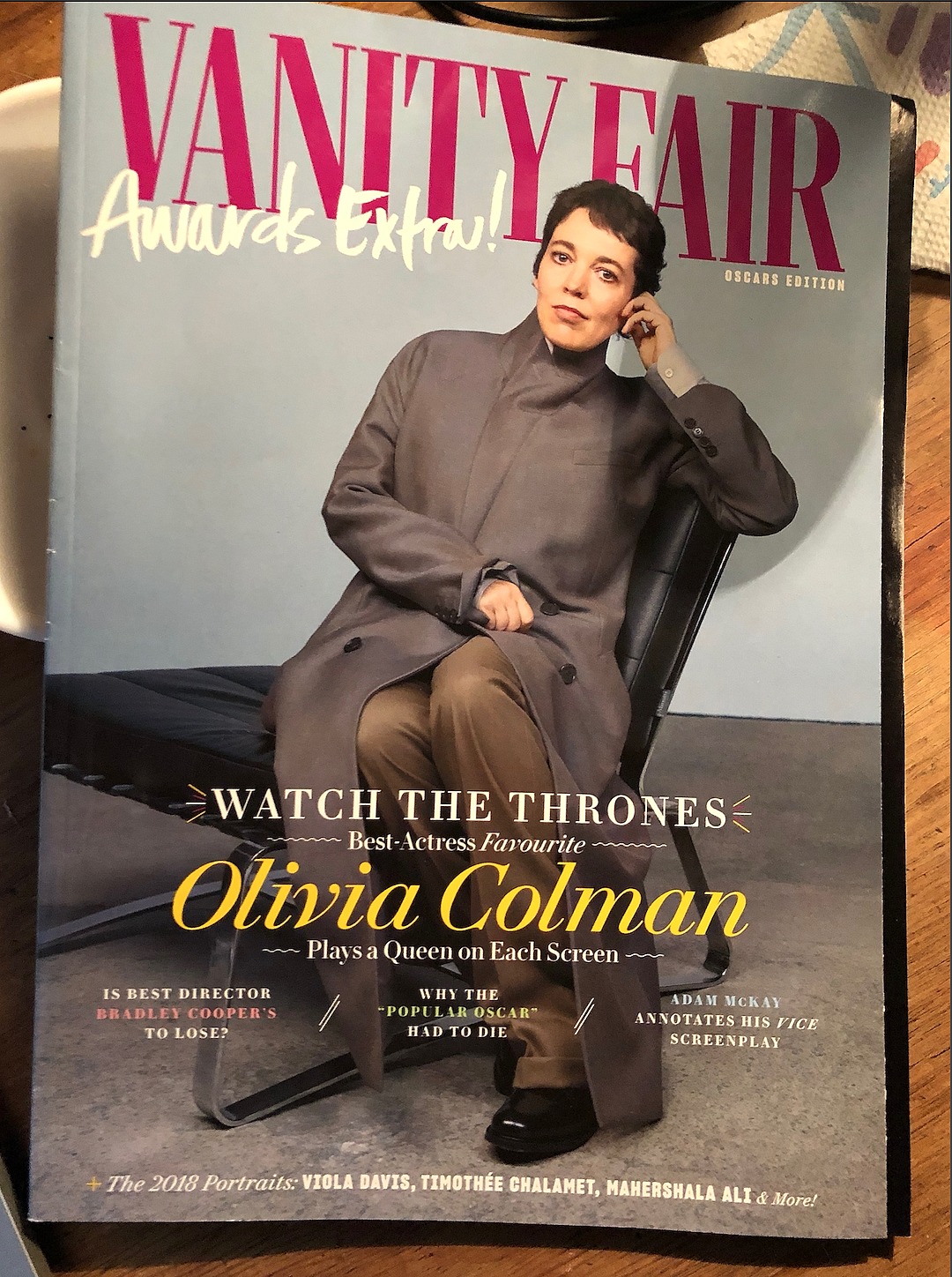 Remember the years when there would always be at least one if not two fully researched, seductively written, looking-back-at-the-glory-days piece by Peter Biskind or Sam Kashner or one of the other heavy-hitter writers? The calamity of Ishtar, when Mike Nichols went kerflop with The Fortune, when Clint Eastwood found his romantic directing mojo with The Bridges of Madison County, the making of William Wellman‘s Star Is Born…that line of country.

Obviously things are not what they once were. The current “Awards Extra!” issue (whether it’s some kind of teaser or not) is like some kind of mildly okay Hollywood Reporter supplement. It’s fine as far as it goes, but it doesn’t exude that top-of-the-world AAA bucks-up vibe that the Vanity Fair Hollywood issues had…what, only three or four years ago?

On top of which the subhead for Richard Lawson‘s Best Picture lay-of-the-land piece (“This Race Could Change Everything”) reads “Oscar bait like First Man is in the game — but so are more tantalizing possibilities.” I hate to say this because I’m a serious admirer, but poor First Man isn’t in the game at all except for Justin Hurwitz being up for Best Musical Score and maybe a tech award or two. It breaks my heart but it’s true.

I’ve been complaining about the Vanity Fair downswirl for a few years now. When Graydon Carter left and VF basically became a kind of glammy “woke” fashion magazine…that was kind of what did it for me.

It just feels as if things are limping along in a scaled-down way.

I read a good amount of Vanity Fair‘s Hollywood issue during yesterday’s Heathrow-to-JFK flight. Is it me or is this one of the shallowest and most skin-deep Hollywood issues ever? Maybe it is me, but I seem to recall previous VF Hollywood issues that mixed serious industry reporting (trends, capturings), high-end portrait photography and fascinating, well-reported old-Hollywood sagas or “how a classic film was made” stories (usually written by Peter Biskind) with the more glammy, superficial stuff used for tinsel diversion.

The emphasis in the current issue is on appearances above all, on show-offy posings and people who are just about perfect, and who are always depicted as being vaguely or obliquely boastful. It feels like…I don’t know, a “woman’s issue” of some kind. Vogue-ish. It seems to skirt rather than dig in. It lacks salt and manliness and consequence. I kept saying to myself as I flipped from article to article, “So fucking what? Who gives a shit about these fucking people?”

I think what tipped the scales is a repulsive piece about celebrity fashion consultants called “Slaves of the Red Carpet,” by Vanessa Gigoriadis. About two thirds through this piece I began muttering to myself, “Something is really amiss here…this is about people who are nowhere in a spiritual or creative sense…greedy, grasping, manipulative…and here I am on a plane over the Atlantic, studying a piece that explores their lives…me! I’m supposed to know better and here I am guzzling it down…a sucker like everyone else!”

Every article and ad is a glib advertisement for the immaculate sexiness that comes from being famous, wealthy, accomplished and well-dressed. There is something so incredibly cool about being wise and hard-working and accomplished and not necessarily being loaded or exquisitely dressed.

The issue contains not one or two but three photo-heavy articles about celebrity photographers — Annie Liebovitz, Chuck Close and ’40s, ’50s and ’60s hotshot Sid Avery. A fawning portrait of storied poster designer John Van Hammersveld…why? Mark Seal‘s piece about how Tony Blair may have had something going with Rupert Murdoch‘s ex-wife Wendi Deng…meh.

Two articles stand out — James Toback‘s piece about his Hollywood adventures (except he doesn’t really tell the stories the way they could and should be told…I’ve listened to more than a few of them first-hand) and one about the troubled marriage between Scientology honcho David Miscavige and his once-believed-to-be-missing wife Shelly.