Support on Patreon Follow @wellshwood
12 Comments
Strangely Drawn To This

Over the last 45 days I somehow overlooked or forgot that Twilight Time’s Beat The Devil Bluray is available for purchase.

Restored three or four years ago by Sony’s Grover Crisp, and four and a half minutes longer (93 minutes and 50 seconds) than the flashback-narrated version we’ve all been watching for decades. And of course it’s told chronologically, start to finish and no wry commentary from Humphrey Bogart‘s Billy Danreuther. And the monochrome palette is reportedly darker than previous versions. $20 if you order direct from TT; $30 through Amazon. 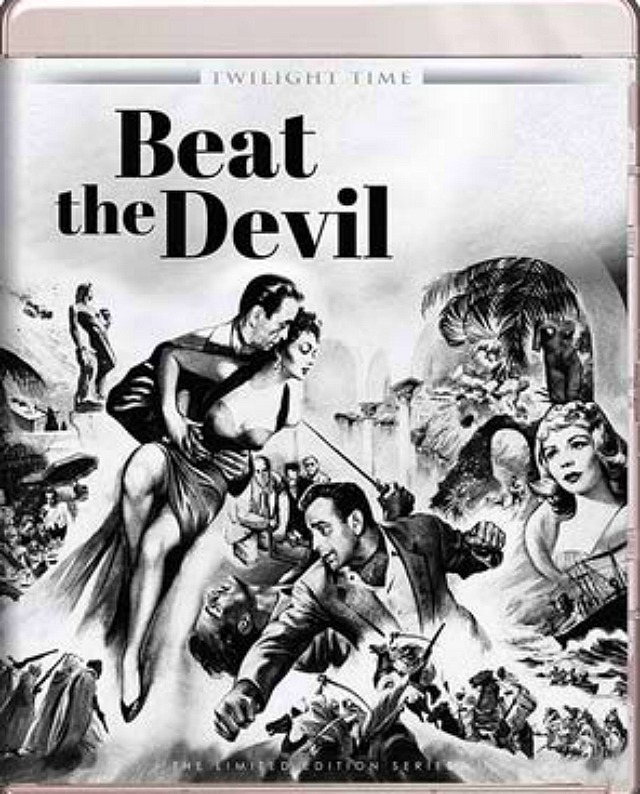 “I’m sure the newbie is an upgrade over The Film Detective’s 2016 Bluray, which I’m fairly happy with.

Posted on 10.27.18: “The newbie played at Manhattan’s Film Forum in February 2017, and then a couple of months later at the 2017 TCM Classic Film Festival. Why have we waited two and a half years for an announcement about the Bluray version, and why is Twilight Time releasing it and not Sony? Because Sony doesn’t appear to give a damn about restored classic films. At the very least they’re indifferent and drag-assy. Crisp did a beautiful job of restoring From Here To Eternity in 2009, and Sony didn’t put a Bluray version out until 2013.

“The Twilight Time Bluray is great news for the 1250 to 1300 classic film fanatics worldwide who are sure to buy a copy.

“To be perfectly honest I’ve never loved Oswald Morris‘ lensing of this 1953 film — it’s too sun-filled, too bleachy. It should have been shot in color with the Amalfi Coast settings and all.”

1. For years I thought that Ira Levin made up the line “nothing recedes like success.” I first heard it in the summer of ’78 when I went to see John Wood in Levin’s Deathtrap on Broadway. A N.Y. Times guy, Richard Eder, was also impressed. In a 2.27.78 article called “Stage: Opening Of Deathtrap; Five-Member Cast‎”, he wrote that “there are some amusing lines, particularly at the beginning. Lamenting his dead-end career after an initial hit, Mr. Wood reflects: ‘Nothing recedes like success.'”

“’Nothing succeeds like success‘ is a French proverb from the 19th century. ‘Nothing recedes like success‘ — that is, nothing goes away faster than success — is a jocular variation that has been cited in print in 1904 and 1905 and was possibly coined by the New York City humor magazine Life.

“Newspaper columnist Walter Winchell (1897-1972) has been credited with the saying; he wrote it in 1931, but the saying existed before Winchell became a columnist.

In a 2.8 interview with Yahoo Movies UK contributor Sam Ashurst, Oscar-winning editor Thelma Schoonmaker, known primarily for her decades-long association with Martin Scorsese, offered two stand-out remarks about Scorsese’s The Irishman. One confused me; the other led to vague despair.

I’m not talking about Schoonmaker discussing the strategy of de-aging the actors (Robert DeNiro, Al Pacino, Joe Pesci), which has been known for some time. 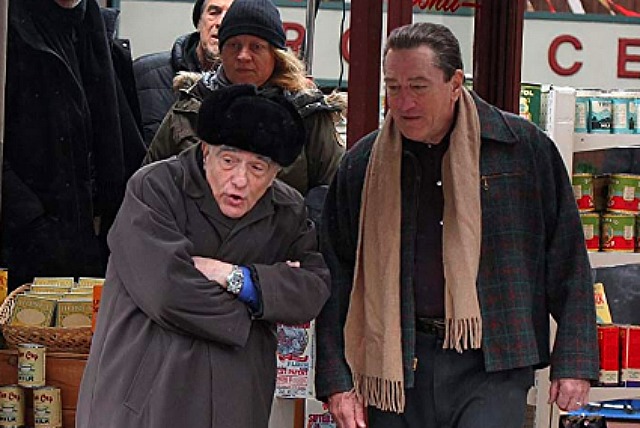 “We’re youthifying the actors in the first half of the movie,” she said. “And then the second half of the movie they play their own age. We’ve only been able to screen for very few people, [but] nobody minds watching them play young, because they’re gripped. The characters are so strong, it doesn’t matter — it’s really funny. [But] I don’t know what it’s going to be like when we get it all — that’s the risk.”

What confused me was Schoonmaker saying that Scorsese’s The Irishman is “episodic” but not “narrative.”

Schoonmaker: “It’s a different kind of movie — it’s episodic, it’s not narrative. When you do a narrative film, you’re always saying, ‘Oh well, you know, we could slim that down, we could move the shot, maybe we should integrate that, maybe we should flashback with that.’ That’s not the way this movie is. It’s very different. You will see. It’s extremely different and it really works, which is very exciting.”

Could it be “episodic” in the vein of The Godfather, Part II? That 1974 film didn’t use anyone’s idea of a conventional narrative either as it kept hopping back and forth between the late ’50s and the late teens and early ’20s.

Thelma seems to be sidestepping an observation I’ve recently read, which is that The Irishman is an old man’s film….an “end of the road” movie about looking back with melancholy and reflecting on mistakes and lost opportunities. 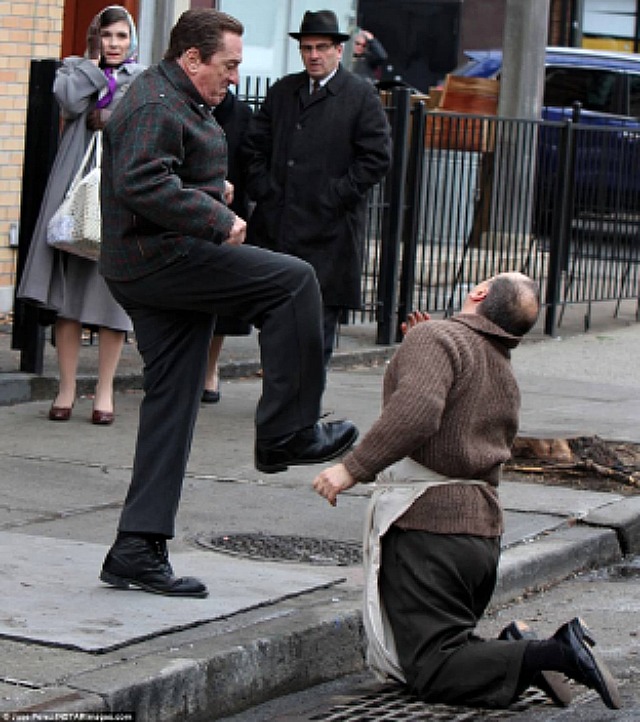 When Thelma says “not Goodfellas“, she presumably means an absence of the usual boppituh-beep. Nefarious wise guys committing crimes and wearing over-emphatic clothing and betraying their wives and each other and storing mink coats in the freezer and whacking each other in the back seats of cars…right?

But how in the name of St. Christopher could Scorsese make a movie about the guy who killed Jimmy Hoffa (De Niro’s Frank “The Irishman” Sheeran) and which is wall-to-wall with Italian mob characters whose names end in vowels (Russell Bufalino, Felix “Skinny Razor” DiTullio, Joe “Crazy Joe” Gallo, Bill Bufalino, Angelo Bruno, Tony Provenzano, Anthony Salerno)…how could a movie like this not resemble Goodfellas? I’ve seen set photos of a dark-haired DeNiro pistol-whipping and kicking the shit out of guys so Thelma is obviously avoiding certain aspects.

So what does she mean, that it’s not going to have that familiar Scorsese goombah gangster flavor? No baked ziti, no sliced garlic, no Italian sausage, no girlfriends or wives with borough accents, quirky personalities and too much eye makeup?

Shawn Levy‘s “The Castle on Sunset: Life, Death, Love, Art, and Scandal at Hollywood’s Chateau Marmont” won’t be out until early May. But it can’t hurt to remind everyone of the contrast between today’s Chateau and the the way things were during a low-rider period in the ’70s.

And those were the published rates. Many of the longtime residents negotiated far better prices. After buying the place in ’75, Ray Sarlot was stunned to learn that he had a fully-booked hotel that was actually losing money. 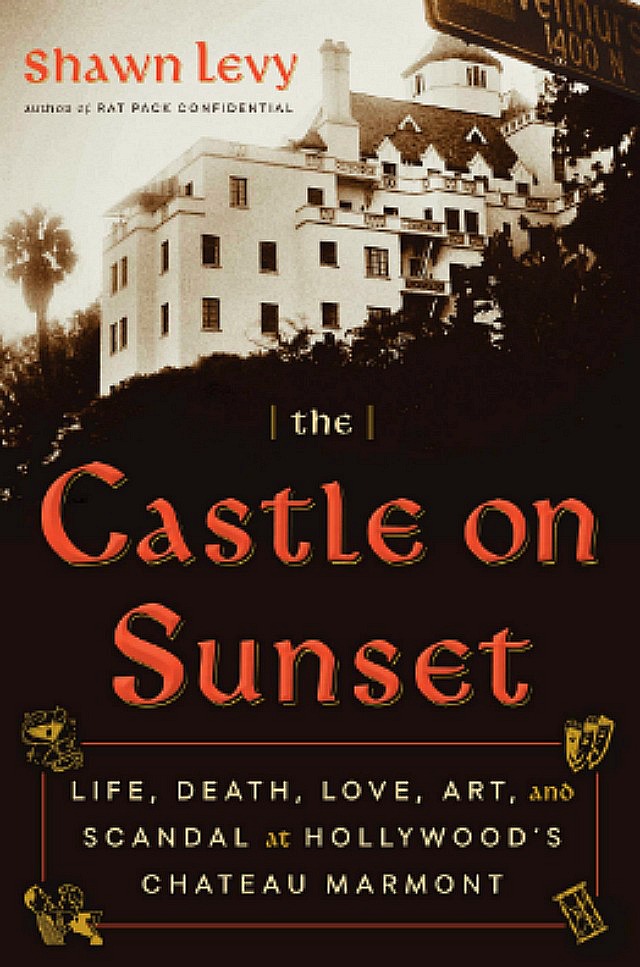 Anecdote #2: During World War II, the hotel was bought by a German banker named Edwin Brettauer who had helped finance a number of classic films back home, including M and The Testament of Dr. Mabuse. In Hollywood, in addition to real estate deals, he funded several films by Douglas Sirk and Fritz Lang (including Hangmen Also Die!).

During Brettauer’s reign, which lasted until 1963, he built the hotel swimming pool and the modern bungalows on the northeast corner of the hotel grounds and, more impressively, he integrated the place. At his insistance, the Chateau Marmont became the first Hollywood / Beverly Hills showbiz hotel to host black guests.

The first time the hotel was ever mentioned in the N.Y. Times was when Sidney Poitier was forced to stay there while making A Raisin in the Sun because nobody in Beverly Hills would rent a home to a black family, even if the paterfamilias was a movie star.”

Those were the Chateau’s proud days. It was a pretty great place also in the ’90s and aughts. Then, of course, managing director Philip Pavel left to run the NoMad hotel in downtown Los Angeles. And then some people with snooty, dicky attitudes took over, and eventually this policy collided with Hollywood Elsewhere in late July of 2017.

“The larger question is, have dick pics ever worked? I mean, Jeff…I know you’re rich but there’s something you should know. There is something in your pants that makes women want to fuck you. Your wallet.”

The Santa Barbara Int’l Film Festival has announced that next year’s event will run from 1.15.20 to 1.25.20. This is unusual as the SBIFF has almost always spanned from late January into early February, in part to avoid overlapping with the Sundance Film Festival. Generally speaking the SBIFF usually begins as Sundance is coming to a close, although once or twice it’s begun a few days or a week later.

Therefore the new 2020 SBIFF dates (1.15 thru 1.25) startled me. I did some checking and discovered that a Sundance Institute applications page contains the following sentence: “The dates for the 2020 Sundance Festival are January 23 – February 2, 2020.”

Therefore the 2020 Santa Barbara Film Festival will, for the first time ever, precede a Sundance Film Festival. The last portion of SBIFF ’20 will actually overlap the first days of Sundance ’20, which means that as far as go-getter journalistic coverage is concerned the celebrity tributes will want to wrap by Tuesday night, 1.21, to allow journos to leave for Park City on Wednesday, 1.22.20.

The earlier SBIFF is an adjustment to the fact that the 2020 Oscar telecast will happen on Sunday, 2.9. The 2019 Oscar show will happen on 2.24, or two weeks later than the 2020 show (and two weeks from this weekend).

For years and years the pattern has been to endure the hard-charging Sundance festival in 25-degree temperatures and snowstorms and whatnot, and then hit the gentle, warmer climes of Santa Barbara and coverage that is always less stressful. But in 2020, it’ll be Santa Barbara first and then Sundance. 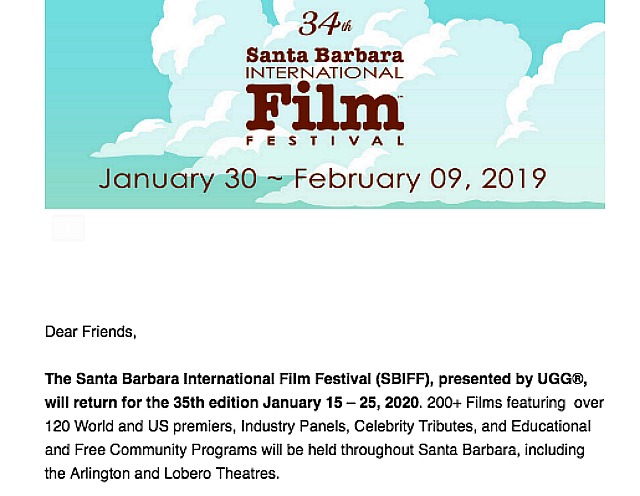 19 Comments
Not The ’70s Racism But The Waning Enthusiasm

They call him Liam “Smaller Paycheck” Neeson, and here’s why: “Lionsgate’s Cold Pursuit isn’t running cold at the box office because of the headlines from Liam Neeson’s reported racist statements; it’s doing $10.3M because he’s made way too many man-with-the-gun movies. Even though this one is supposed to have a Fargo tone, it looks like another man-with-the-gun movie…in the snow…with a snowplow.

“Neeson is in Nicolas Cage land now — in fact, he’s been here for quite a while — where all of these pics have run their course stateside, and are financially structured for overseas audiences” — i.e., Asian, Indian and Middle-Eastern sophisticates.

“Cold Pursuit‘s opening weekend is lower than last year’s The Commuter ($13.7M, which only did a 2.6x multiple stateside for $36.3M, but made close to $120M worldwide off a $40M production cost). Both pics come to Lionsgate via a StudioCanal release deal. Lionsgate didn’t shell out an MG, they just spent mid-teens for the P&A, and in regards to their books at the end of the day, they expect to break even, if not a bit better.” — 7:21 am box-office update from Deadline‘s Anthony D’Alessandro.