Just about every office-holding Democrat has called upon Virginia governor Ralph Northam to resign over a racist photo in his 1984 medical school yearbook, in which he apparently wore blackface. Then came an admission from Virginia’s Attorney General Mark Herring (who could become governor if Northam and Lt. Gov. Justin Fairfax ** resign) that he wore brown makeup and a wig to look like a rapper at a party in 1980, when he was a 19 year-old University of Virginia student.

Hollywood Elsewhere is not suggesting that these two should be cut any slack, but it seems fair to ask what form of SJW punishment has been visited upon Billy Crystal. I’m referring to Crystal having impersonated Sammy Davis Jr. in brownface in a 1986 HBO Special “Don’t Get Me Started” as well as, according to the Christian Science Monitor, during a bit on the 2012 Oscars? (Note: Crystal’s impression works because he can “do” Davis’s voice just so.)

Not to mention Robert Downey, Jr.‘s blackface performance in Tropic Thunder, which opened a little more than a decade ago.

What Northam and Herring did in the ’80s was obviously icky, but their main crime, it seems, was having been college students instead of professional entertainers. Because the culture wasn’t freaking out about blackface impersonations as recently as ten or even seven years ago. 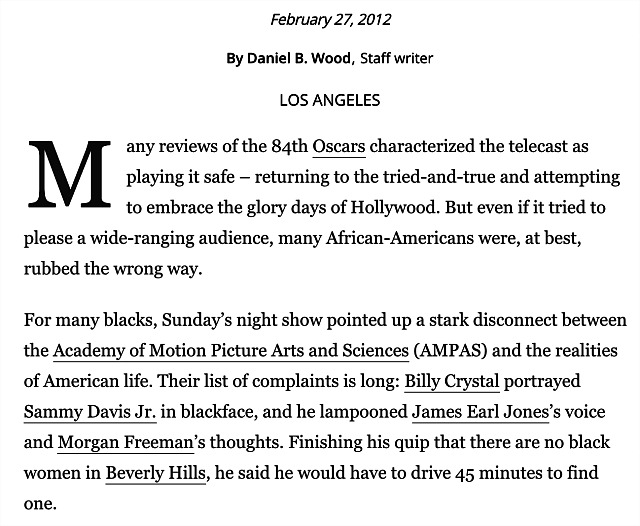 ** Fairfax has recently been accused of sexual assault.

February 7, 2019by Jeffrey Wells42 Comments
« Previous post
Whatever Happened to Those Pryor Biopics?
Next post »
Final Measure of “Roma”: Cleo vs. Dog Turds