Torrential rains interfered with the Santa Barbara Film Festival earlier today. In the late morning the 101 freeway was temporarily closed due to flooding. There were running rapids, vigorous streams, street ponds and even street lakes everywhere. I loved buzzing around inside my 2018 Volkswagen Beetle rental — such a smooth-running, well-constructed car, and with a great sound system.

Umbrellas were all but impossible to find. I was told “sorry, bruh” at three…make that four stores. I finally snagged one at the fifth.

Honored Riviera Award recipient Viggo Mortensen tried to drive up, but got stuck in Camarillo. Soon after he and travel-mate Ed Harris (who presented Mortensen’s award at the end of this afternoon’s ceremony) were heroically and adventurously flown to Santa Barbara in a private plane. The Riviera show, moderated by Deadline‘s Pete Hammond, was only delayed an hour.

Glenn Close, recipient of the SBIFF’s Maltin Modern Master Award, cancelled her 8 pm Arlington theatre show altogether — it will now happen tomorrow afternoon (Sunday) at 3 pm. Hmmm. If Mortensen could make it for a (delayed) 3 pm ceremony, why couldn’t Close get here in time for a show that would have started five hours later? Where there’s a will, there’s a way.

The rain prevented four out of seven invited screenwriters (Green Book‘s Brian Currie, If Beale Street Could Talk‘s Barry Jenkins, The Favourite‘s Tony McNamara, Generation Wealth‘s Lauren Greenfield) from attending the annual Writers Panel at the Lobero. Moderator Anne Thompson had to make do with First Reformed‘s Paul Schrader, BlacKkKlansman‘s Kevin Willmott and A Star Is Born‘s Will Fetters.

I didn’t make it to the Producer’s Panel, but I gather it was also under-attended. 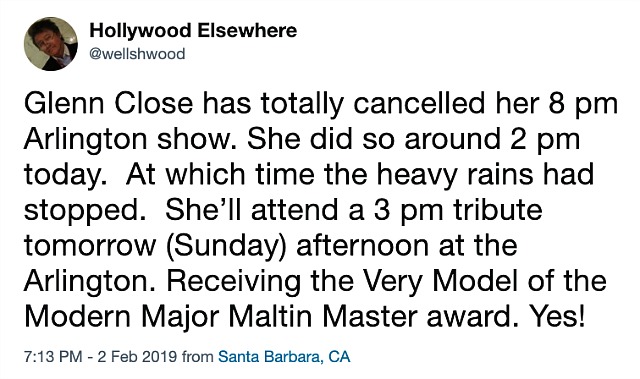