I’m aware of the post-PGA Green Book surge, and I agree that it’s probably a stronger preferential ballot contender than Roma. But I still think Roma will win the Best Picture Oscar, and for four reasons.

One, it’s a masterful smarthouse memory poem — a film that 5, 10 or 20 years from now the Academy can look back upon with serious pride. Two, a Roma win would spell out a huge fuck-you to the hateful, bottom-of-the-barrel opportunism of Donald Trump. Three, Alfonso Cuaron is very well-liked by everyone. And four, those perfect jet planes flying overhead, not to mention those enormously metaphorical dog loads in the driveway.

Sasha Stone says: “I disagree with Zack Sharf‘s assessment. I think Roma creeps up the ballot out of guilt and obligation and appreciation for craft, even if people don’t love it. I think Roma‘s best chance of winning is actually on a preferential ballot, and yet the Best Picture race remains wide open at this point. The only movies that have won anything so far are Bohemian Rhapsody, Green Book and Black Panther, and none of them have Oscar nominations for Best Director. It’s a really crazy and unpredictable year.”

All this said, if Green Book wins the Best Picture Oscar this would surely be understood as an even bigger fuck-you to the p.c. wokester commentariat. I can’t think of a more delicious scenario than this. My pulse accelerates at the thought. 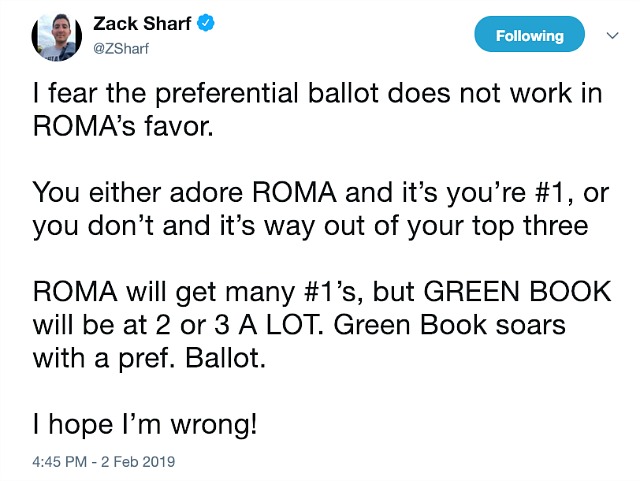