There’s a whopping irony in the contrast between IFC’s modest buy and the $14 million paid by Amazon for Scott Z. Burns‘ The Report, which is also a fact-based whistleblower drama about exposing shifty, lying behavior on the part of the Bush-Cheney administration in the selling and prosecution of the Iraq War.

The Report is about Senate staffer Daniel Jones (Adam Driver) investigating, authoring and releasing a massive report on CIA torture.

Official Secrets is about real-life translator and British intelligence employee Katharine Gun (Keira Knightley) revealing a U.S. plan to bug United Nations “swing”countries in order to pressure them into voting in favor of the 2003 invasion of Iraq, which of course was founded upon a fiction that Saddam Hussein‘s Iraqi government was in possession of WMDs and represented a terrorist threat.

Official Secrets is exactly the sort of fact-based government-and-politics drama that I adore, just as The Report is precisely the kind of self-righteous, moral-breast-beating drama that I can’t stand. 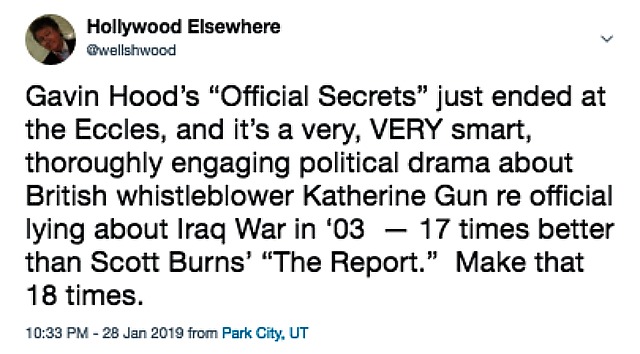