None of these guys have that galvanizing X-factor movie-star chemistry…none of ’em. Debicki was reasonably compelling in Widows as far as it went, but calm down. She’s almost 6′ 3″, but she has the aura of a part-time Bloomingdale’s salesperson. Rpatz is a good hombre and a hard-working indie-realm costar but he’ll never hit a mainstream homer — we all know that by now. And Washington is tepid dish water. The Nolan film in question will pop on 7.17.20. 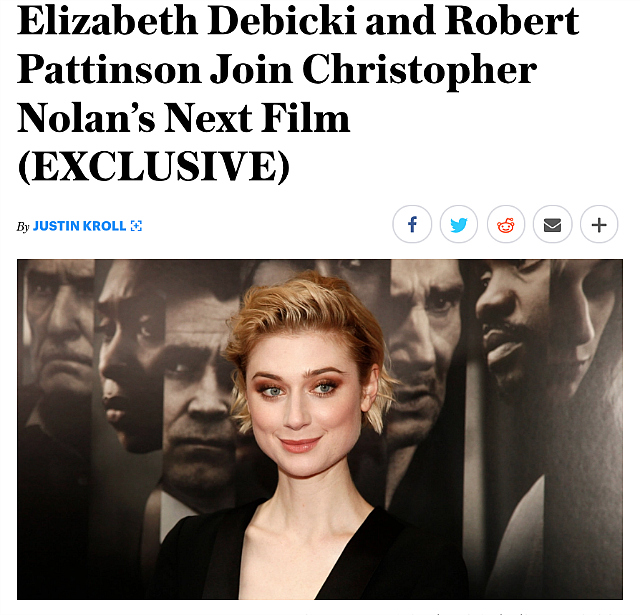 Jordan Peele‘s Get Out was about a covert and malignant plot on the part of wealthy, Obama-supporting Anglos to turn blackfolk into obedient zombies through hypnosis. The basic message was “whiteys might act friendly and profess to understand and applaud black culture, but they’re actually Satan’s spawn.”

Us (Universal, 3.22), Peele’s soon-to-open followup, is about…well, not exactly another whitey conspiracy but something close to that.

Once again innocent blackfolk (or the vacationing Wilson family, played by Lupita Nyong’o, Winston Duke, Shahadi Wright and Evan Alex) are being viciously preyed upon, only this time by house-of-horror reflections of themselves — by spooky, raspy-voiced, scissor-wielding dopplegangers dressed in red jumpsuits. Moreover, the red jumpsuits are part of a coordinated nationwide army of predatory fiends. But why? To what end?

In turns out that the inspiration behind all of this feral, howling, over-acted viciousness is another white-person scheme — the up-with-people, let’s-all-hold-hands-and-love-each-other vibe behind Hands Across America, the 1986 nationwide charity organized by the evil Ken Kragen and supported by USA for Africa, a charity org that promoted “We Are The World” (and was prominently allied with the nominally black Michel Jackson).

The message is something along the lines of “corporate whiteys and their allies might talk about love and togetherness and communal giving, but they’re actually killers of the African spirit so, you know, keep them at a distance…in fact, you might want to arm yourself with a pair of extra-large scissors.”

Yes, the doppleganger plague also happens to the Tylers, a white family that’s friendly with the Wilsons (Elisabeth Moss is the mom). This obviously dilutes the racial scheme to some extent. But Us is about the Wilsons and Ken Kragen is the wicked Beelzebub behind it all, so don’t invest too much in the “innocent whiteys are suffering too” aspect. White rabbits are all over this film (particularly in the third act) and…well, you figure it out.

After a half-hour set-up in Santa Cruz with a particular focus on the city’s beachfront amusement park (which I haven’t visited in 30 years), Us turns into Night of the Living Dead Dopplegangers meets Karyn Kusama‘s The Invitation. Kusama’s 2015 thriller is a far better film that Peele’s, but they have a similar attitude about abstract cosmic malevolence.

How good is Lupita? She’s excellent — the absolutely valiant hero of this jumbled, lurching, hazy-minded horror pic. How likely is it that she’ll end up as a Best Actress contender, as Variety‘s Marc Malkin recently suggested? No fucking way. It’s just a Jamie Lee Curtis terrified-victim performance. Update: I’ve just learned that men in freshly laundered white outfits are currently searching for Malkin as we speak.

Is Us boring? No — it’s engaging as far as it goes. It plays its own horror music, dances to its own choreography, snaps and snarls in ways that will make you sit up and say to yourself, “Whoa, that was striking.” But it’s not that clever or brilliant. It’s approvable but calm down.

Time Out‘s Joshua Rothkopf has compared Us to John Carpenter‘s The Fog (’80), the somewhat disappointing follow-up to the hugely successful Halloween. That’s about right.