Like many others I’ve been thinking about a seismic event happening tomorrow, which is basically the end of 20th Century Fox as we’ve known it for so many decades. It’s officially being absorbed (i.e., swallowed whole if being strategically maintained as a separate unit) by Disney on 3.20.19. By any measure a sad end of an era.

But of course, the 20th Century Fox brand had been eroding and diminishing for a long time. Which regime presided over the most bountiful or influential Fox heyday? The Daryl F. Zanuck era (20 years from the mid ’30s to mid ’50s)? The Alan Ladd, Jr. era of the early to late ‘70s? Or Bill Mechanic‘s reign (’94 to ’00)? The standard answer is to point to Zanuck’s as the greatest, but I have a special respect and affection for the Mechanic reign, perhaps because I personally lived through it as a covering journalist.

Mechanic-wise, most people would point to the following highlights: Titanic, Bulworth, Fight Club, Independence Day, Die Hard with a Vengeance, Mrs. Doubtfire, Speed, True Lies, Braveheart (co-production with Paramount), Cast Away, Boys Don’t Cry, There’s Something About Mary, Ice Age, X-Men, The Full Monty, Boys Don’t Cry and Moulin Rouge. Most of these were high concept, yes, but many were masterfully written, high-craft efforts about actual people and real-life capturings, which happened from time to time in those balmy days before the superhero plague.

The TCM Classic Film Festival is hosting a special tribute to Fox’s fabled history on Saturday, 4.13. The copy doesn’t even allude to the fact that Fox has been eaten by Disney.

Mechanic remarks: “As with any studio, there were peaks and valleys. The Zanuck films were obviously distinctive within their realm. I thought Laddy left behind a good legacy, and felt that we restored some of the luster.

Not sure I have much more to say than what I already have. [Rupert] Murdoch never liked movies, and never cared to build the studio into anything other than a supply line for TV/cable (much like the streamers are doing), and thus dumped all the history unceremoniously and without a tinge of regret.” 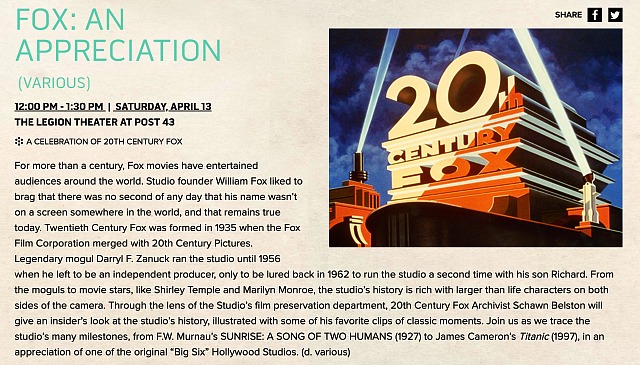