He Who Must Hide

If and when Terrence Malick‘s Radegund debuts at the 2019 Cannes Film Festival, it will have spent 30 or 31 months in post — roughly six or seven months longer than the average length of time that Malick’s last three films — To the Wonder, Knight of Cups and Song to Song — have logged in the editing room. Will Mr. Wackadoodle actually risk screening his German-language antiwar film to Cannes critics? My instincts tell me no — Malick is a hider, a ditherer, a lettuce-leaf tosser. He prefers the cool shadows of the cave to the hot glare of exposure.

“Case of the Missing Radegund,” posted two months ago: During the summer of 2016, or two and two-thirds years ago, Terrence Malick shot principal photography on Radegund, a fact-based anti-war drama set in Austria and Germany. Directed and written by the press-shy auteur, the German-language drama is about Franz Jagerstatter (August Diehl), an Austrian conscientious objector who was executed by the Third Reich for refusing to fight.

Between 2010 and 2017, during which time the reclusive and mercurial Malick shot and gradually released To the Wonder, Knight of Cups and Song to Song, he’s averaged about two years of post-production editing per film. So when Radegund costar Matthias Schoenaerts told The Independent‘s James Mottram last July that he expected Radegund to premiere at the 2018 Venice or Toronto film festivals, the timing seemed feasible. 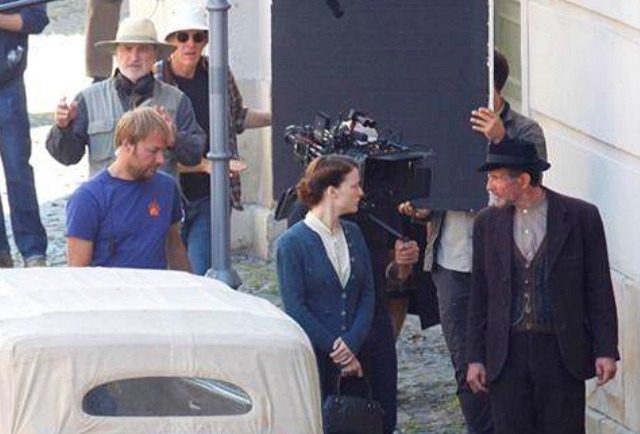 I’d been told a few weeks before the Independent piece that Radegund probably wouldn’t pop at the early fall festivals and would continue to hide out until the February 2019 Berlinale, and perhaps beyond that.

Radegund didn’t appear anywhere last fall, of course, and yesterday it was announced that barring some last-minute surprise announcement it will be absent from the Berlinale. Now the next likely festival is Cannes, but who knows with Malick?

Last July I wrote that “I actually wouldn’t be surprised if Radegund turns up closer to next year’s Cannes Film Festival or even, don’t laugh, during Venice/Telluride/Toronto of ’19.” Who’s laughing now?

Besides Schoenaerts and Diehl, the other Radegund costars include Valerie Pachner, Michael Nyqvist (who died in June ’17, roughly ten months after giving his performance), Jurgen Prochnow and Bruno Ganz.

March 19, 2019by Jeffrey Wells17 Comments
« Previous post
It Tolls For Thee
Next post »
Water Under The Bridge But…