If I Was Tsujihara’s Ghostwriter…

Early Friday morning “embattled” Warner Bros. CEO Kevin Tsujihara sent a letter of apology to WB staffers about the Charlotte Kirk thing, which has prompted everyone in town to yawn and shrug their shoulders.

The Hollywood Reporter‘s Kim Masters and Tatiana Siegel reported this tale of sexual intrigue and resentment on 3.6.

If I was Tsujihara’s speechwriter and he’d asked me to rough out a statement that explains this mess, here’s how I’d put it: 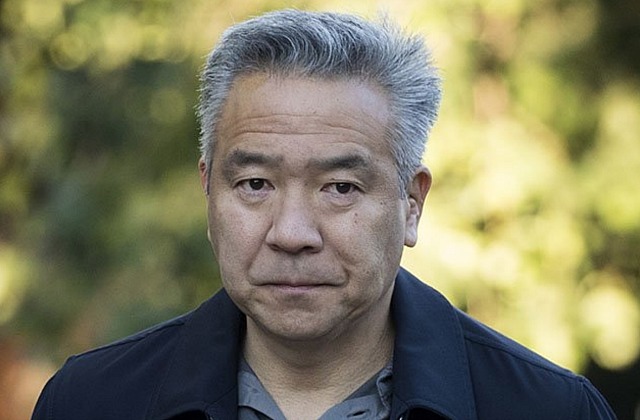 By now, you’ve read that irksome Hollywood Reporter hit piece. You’re therefore aware that I’ve behaved in a somewhat embarassing manner, albeit not unlike each and every studio head and hotshot producer who has ever worked in this town, going back to the days of Jesse L. Lasky and Samuel Goldfish.

Please understand that I’m not proud of this — the applicable terms are actually “furious” and “mortified”. But you also presumably know, being adults, that hotshot executives like myself enjoy succumbing to certain behaviors during our all-too-brief periods of privacy. Because we have the money to throw around, because it’s easy to get away with stuff, because guys like myself are generally insulated from touchy consequences.

As long as we’re not being cruel or committing felonies or dancing naked before bonfires while wearing animal-head masks or, God forbid, being shadowed by our significant others, most Hollywood executives like to do what they like to do in the company of trusted friends and colleagues. Right? We’re all familiar with this syndrome or attitude. It’s called “kicking loose”, “letting our hair down”, “setting free the libertine.”

Presumably other Warner Bros. employees besides myself have sampled said behaviors.

The concept of privacy used to have some currency in our culture. Once upon a time journalists actually believed that persons like myself were entitled to sample forbidden fruit in their off hours — to behave in technically “sinful” but harmless ways, to cavort like less-than-perfect human beings, to play around like JFK did in the early ’60s, or like Roy Scheider‘s “Joe Gideon” did in All That Jazz. Those were the days!

I deeply regret having brought pain and embarrassment to the people I love the most, yes, but mostly I regret having been busted and publicly shamed by Kim Masters and Tatiana Siegel. What did I do, really, that was so terrible? I catted around with a pretty English actress, knowing full well I’d probably have to reciprocate with some casting favors. And so what? This kind of thing happens all the time.

Okay, so the actress felt she didn’t get what she expected out of our arrangement, and yes, that was completely my fault. But I’m hardly Charlie Sheen or Brett Ratner or Leonardo DiCaprio back in the late ’90s. I’m a 50ish married guy with kids who got caught poking around…BIG DEAL.

In the realm of powerful Hollywood dudes who drive Beemers and Porsches, having it off with a pretty lady outside the bonds of marriage is absolutely nothing — an episode that would barely rate a mention in Confidential, the old-styled gossip magazine that used to cause trouble in this town in the late ’40s and ’50s.

I do, however, deeply regret that these personal actions have caused embarrassment to Warner Bros. and to all of you. I realized some time ago you are right to expect more from me and I set a course to do better. That journey continues.

I am so proud of the great work you do every day. Together, we have built a company that is the gold standard in our industry. Warner Bros.’ culture is as important to our success as our business model. We need to continue the hard work we’ve done over the years to create a workplace where everyone feels included and heard. To that end, I’ve asked HR to make additional accommodations if anyone needs to talk.

Please don’t let my mistakes become a distraction. It’s important that we all stay focused on our work—and part of that is creating a culture and company of which we can all be proud. Thank you all for everything you do to make that happen every day.