Last night I tried to catch a 7 pm all-media screening of Jurassic Park: Fallen Kingdom (Universal, 6.22) at the AMC Century City, but I almost didn’t make it. It happened in theatre #2, where two previous screenings had occured at 10 am and 3 pm. I arrived around…oh, 6:50 pm but all the seats seemed to be taken. I asked a Universal staffer if I should leave and she said, “No, no…we’ll figure it out.” Things didn’t look at all hopeful.

On top of which the crowd looked kind of mongrelish to me — overweight, T-shirts, jeans and sweat pants. There were a lot of kids there, and they all seemed to be wolfing down popcorn, candy and super-size soft drinks. A typical mall mob, the kind you’d see at Magic Mountain or Disneyland or Knotts Berry Farm. A thought went through me — “Do I want to sit with these awful-looking people? I don’t see any of my critic friends here. This is not my kind of scene.”

I shook myself out of that mindset, manned up and decided to do my job, even without a seat. After a while I walked up the left-side aisle and sat down on the steps. 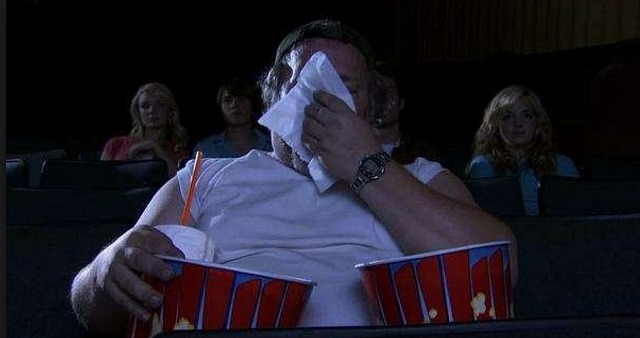 Ten seconds later a nice 30ish woman said, “We have a seat here.” It was five or six in from the aisle. “Oh…thank you so much!,” I said. I shuffled my way in and sat down, and right away felt a twinge of concern. On my right was a 20something woman of no particular distinction, but to my left…good God…was a Jabba-sized Latina who was sitting with a similar-sized friend. And Jabba #1 was eating, eating and eating. The movie began and she kept chowing down like someone who hadn’t eaten in days.

Her first course was some kind of chicken salad, tomato and cucumber dish inside a deep plastic container. Then came the second course — a butter-soaked tub of popcorn and a big slurpy drink. Then she opened up a bag of Doritos.

I didn’t say a word. I didn’t give her the HE stink-eye. I just sat there like a sphinx and tried to concentrate on the film. But every now and then I snuck a peek.

I couldn’t ignore the fact that Jabba #1’s reactions were extremely coarse and downmarket. I was reminded of those close-ups of Collisseum cheap-seat serfs watching Christians get eaten in Cecil B. DeMille‘s The Sign of the Cross. Every time a person got eaten by a dinosaur, Jabba #1 went “Oooh, hoo-hoo-hoo-hoo!” Movies like Fallen Kingdom are obviously made with this kind of person in mind. And she really loved the huge alligator-like dino that leapt out of the sea to eat a squealing 20something guy who was trying to climb into a hovering helicopter — “Eeeeee-hee-hah-hah!” Anything and everything that happened of a stupid or low-rent or pandering nature, Jabba #1 was in movie heaven.

Yes, I focused on the film and took mental notes all through it, but I couldn’t completely divorce myself from the Jabba #1 factor. I mostly pushed it aside but I kept twitching when she laughed. I’ve said this dozens of times over the years, but hell is truly other people.