A Kino Lorber Bluray of John McNaughton and Richard Price‘s Mad Dog and Glory pops this week. Beautifully written, superbly acted, and 27 years old. Shot by Robby Muller and cut to perfection — one of my all-time favorite ’90s films. And perfectly scored. The kind of film that big studios abandoned ages ago — the intelligent, adult-angled, middle-budget dramedy. Smooth and deft and finessed just so, and with a theme that adds up and makes sense.

Everybody looks so young in this thing. Robert De Niro, 49 during filming but looking more like 41 or 42, is Wayne, a.k.a. “Mad Dog” — a timid, lonely Chicago cop who specializes in forensics and crime-scene photographs. Bill Murray, 42 at the time, is Frank “the money store” Milo, a Chicago mob guy who becomes a big brother and “friend” of Wayne’s after the latter saves his life.

David Caruso, 36, was never better as Mike, a fellow cop and Wayne’s best friend. And Uma Thurman, 22, delivered one of her best early-phase performances as Glory, a cocktail waitress who falls in love with Wayne (and vice versa) after Frank (“the expediter of your dreams, pal”) brings them together. 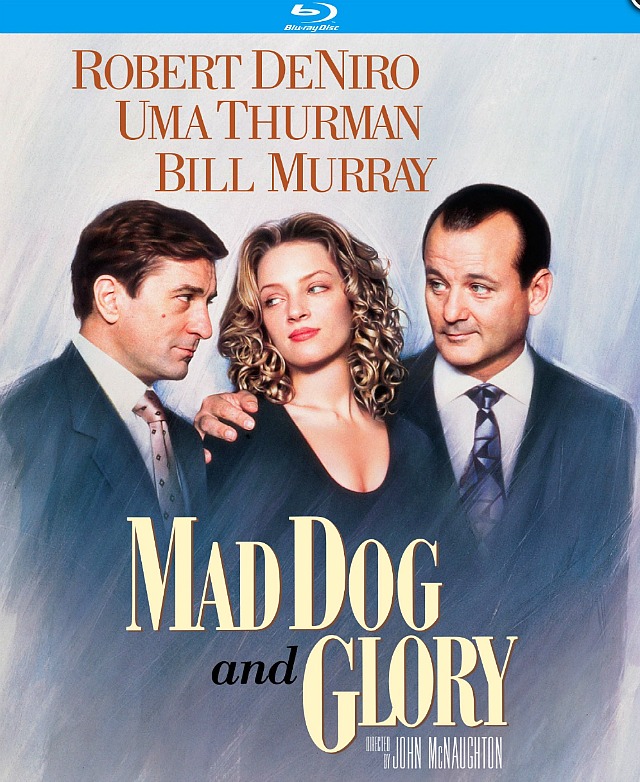 Murray is a tough loan shark who’s a lot like Murray in many ways, just not internally. He’s angry and doesn’t really like himself or his friends or his life. He wants to be somewhere else. He’s seeing a therapist to try and deal with the hostility, and he performs a stand-up comedy routine at a place called the Comic-Kaze Club, which he owns. But he doesn’t want to lose the gangster life either.

Frank and Wayne’s connection begins when Wayne — joshingly called “Mad Dog” by his cop pals — saves Frank’s life during a grocery store holdup by calming down a jittery holdup man and sending him away without bloodshed.

Frank is initially appalled (“You’re a cop?”), but the next evening, realizing what Wayne actually did and starved for a friend, Frank tries to reciprocate by getting friendly over drinks. The next day he sends Glory, who works at the Kamikaze Club, over to Wayne’s place, the idea being for her to stay with him and take care of whatever for seven days.

The wrinkle comes when Wayne and Glory fall in love, and Wayne decides he doesn’t want her being Frank’s “favor girl” any longer. But Frank won’t let her go (Glory has offered her services in order to save her brother from being killed over a debt) unless Wayne coughs up $40K…fat chance.

The theme of the film is, basically, “no guts, no glory.” That sounds like macho crap, but it’s well sold. 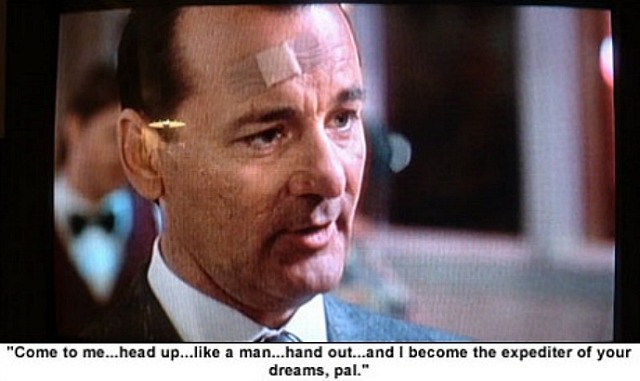 I don’t know where Price’s script ends and Murray’s improvs begin, but Mad Dog and Glory is full of little Murray doo-dads. There’s his lounge-lizard rendition of “Knock Three Times,” crooned at the beginning of a tense scene. His addressing De Niro as “ossifer” (a term I hadn’t heard since I was a kid in New Jersey). The way he holds an air bugle to his lips and does a cavalry-charge bugle sound when De Niro’s cop friends come to his rescue at the finale.

There’s a scene in a diner in which Frank’s intellectually challenged top goon, Harold (Mike Starr), who’s sitting nearby with a supermarket tabloid, points at a middle-aged man sitting at the counter and whispers to Milo, “Hey, Frank? Isn’t that Phil Donahue?” A shot of the guy in question proves otherwise. Murray half turns in his seat and says, “Put the magazine down, Harold, before you hurt yourself.”

Consider the melancholy in Murray’s eyes after his fight scene with De Niro at the finish. This is a bright, sometimes funny guy who wants out and knows he won’t get there. He pulls a loose tooth out of his mouth, gestures at the gaudy Cadillac he’s sitting in and the gorillas he’s riding with, and says with a look of pure disgust, “This is my life .”

And Caruso’s Mike is his best feature-film riff ever. Mike is a sarcastic hardass, but a good man and loyal to the end. He has a bravura scene in which he faces down a bigger guy in a bar over a domestic abuse issue (the basher is another cop) and makes him back off. It’s a total classic. You can see why he had a lot of heat coming off this.

The film also has a couple of great Louis Prima tracks (“Just a Gigolo,” “That Old Black Magic”) that turned me into a fan.

Wayne: It’s the first time I pulled out my gun in 15 years. I pissed on myself.
Mike: You know why? Because you’re a sensitive, intelligent indivdual.
Wayne: You ever piss yourself?
Mike: Look, I woulda walked in there and drilled the rat-eyed little bastard, and that’s just the way I am. On the other hand, if I ever had an intelligent thought it would die of loneliness so it all evens out, you know what I mean? (pause) Look, if it ever happens again…? The best thing is sex. You’re all adrenalized? You go off like a rocket. If it was me, I’d be on the phone with every girl I knew [that] wasn’t related by blood. Listen, don’t kid yourself — that was balls-up what you last night.