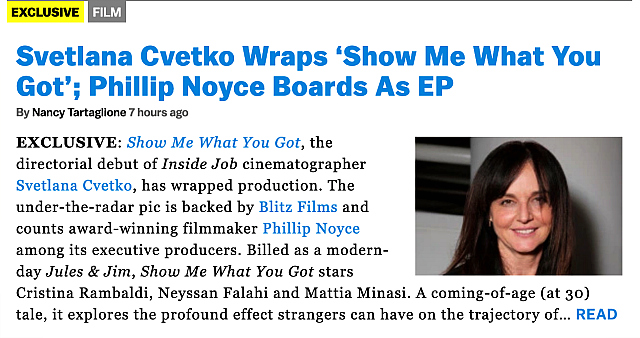 My hope or expectation is that Show Me What You Got (which sounds like a cross between “how deep and spiritual are your inner regions?” and “pull your pants down”) will peek out sometime soon. A Los Angeles cool-cat screening may happen before long. Festival-wise I’m hoping for a peek-out during the warm weather months, or at least by the early fall.

Has Svetlana shown me her film repeatedly because she values my tough judgment and because she trusts me to really tell it like it is? I can only answer by saying “is this not what friends are for?” Has she shown it to my music-marketing and band-managing son Jett because she wanted his opinion on scoring? To this I can say “yes, she has.” So the family is up to speed. Before long it’ll be time to raise the world curtain.

Blitz Films financed and produced Show Me What You Got, which is in line with the company’s vision to back up-and-coming directors. Blitz’s Nikolay Sarkisov and Double Take Pictures’ David Scott Smith are producers with Noyce and Sergey Sarkisov exec producing.

Cvetko co-wrote the script with Smith. Her dp credits include Inside Job, Facing Fear, Red Army and Inequality For All.