Support on Patreon Follow @wellshwood
23 Comments
Head Of The Class

A little after 8 pm last night Tatyana and I visited West Hollywood’s The Pleasure Chest. I know — right away you’re going “uh-oh, wait a minute”…right? Well, a lot of people go there for this and that, and I’m just average common too, I’m just like him and the same as you.

Three and a half years ago I reported that Anonymous Content’s Michael Sugar had tossed me a little tidbit during a Spotlight lunch at Craig’s: Within a year or so an “Academy app” will surface that will allow Academy members to watch all the films in awards contention in high-def, but one that will also be configured so that recording content will be impossible. No more DVDs, no video links…all of that trash-canned.”

But the “Academy app” thing never happened. A few weeks later I asked then-Academy honcho Cheryl Boone Isaacs whether the “Academy app” was in fact being developed. She didn’t deny that some kind of streaming option was being looked at, but indicated it wouldn’t happen for a while.

Now something similar is afoot. The Hollywood Reporter‘s Rebecca Keegan and Scott Feinberg are reporting that the Academy “is developing a streaming service of its own that would enable distributors to stream their own Best Picture Oscar hopefuls to voters,” but at a cost of $10K to $15K per film.

I’m seriously thinking about submitting a proposal for a book titled “Aspect Ratio Wars: The Epic Home-Video Battle Between Hollywood Elsewhere and 1.85 Fascism, and How The Good Guys Lost Despite The Support of the Movie Godz.” The hero (fighting for the concept of boxiness, oxygen and visual breathing room vs. dogmatic 1.85 claustrophobia) would be yours truly, fighting alone and standing alone against the Bob Furmanek-led mob. It’s a crazy, nonsensical story but it happened, and God knows how many classic films were cleavered and partly ruined as as result.

I could write this book in a month because it’s already been written in Hollywood Elsewhere portions. I would just have to refine and rephrase. The problem is that it would only sell about 1500 copies, as the number of people in the world who give a shit about aspect ratios probably doesn’t amount to more than four or five thousand, if that. I’m not even sure it would sell that much. But someone has to stand up and tell the truth about how Furmanek and his acolytes managed to convince home-video distributors to lop off God knows how many thousands of acres of visual material from God knows how many ’50s and ’60s films on Bluray.

Jeffrey Wells grabs Roman Polanski by the shoulders and draws him close.

Wells strikes Polanski across the face, hard. He’s got his attention now.

WELLS: Stop lying to me, ya little fucker! What’s the aspect ratio?

Notre Dame’s rector has said that the devastated cathedral “will be closed for five to six years.” Until 2024 or 2025. ($1 billion has been raised for the reconstruction.) You’ll notice that authorities have entirely blocked off Ile de la Cite. They can’t keep that rule in place for very long. Think of all the tourist joints (cafes, restaurants, souvenir sellers, gelato vendors) that are losing income as we speak.

I’ve stood and stared many times at this hallowed Paris monument over the last 40 years. My father visited me and my then-girlfriend Sophie in Paris in the summer of ’76. Notre Dame was black and sooty at the time, and my father’s first comment when he first laid eyes was “that’s it?” In January ’87 I climbed the winding, claustrophobia-inducing stairs inside one of the grand towers. The kids did the same when we visited in early ’00. My ex Maggie and I were married at St. Julien le Pauvre (the oldest church in Paris), just across the Seine. We stayed at Hotel Esmeralda. I also attended a Sunday mass sometime in the early aughts, and I’ll never forget that smoky incense aroma and the way an older French guy sitting next to me sang “aaahh-mehhn.”

I’ve spent the last 90 minutes “reading” (i.e., skimming through summaries of) the just-released Mueller Report, and I can’t do this all day. Not if I want to bang out my usual quota. But the special counsel’s carefully qualified conclusion that President Trump didn’t precisely or definitively collude or conspire with Russian operatives, or at least that there’s insufficient evidence to prove same, appears to be valid, if you want to be super-careful and extra-tippy-toe about it.

But Trump sure as hell obstructed justice here and there (what do you call firing James Comey over “this Russia thing“? serving justice?) and throw the fog and flim-flam around. He refused to be interviewed by Mueller’s team — what does that tell you?

The report certainly portrays Trump as peripherally dirty as hell in these myriad matters, and, if you ask me, as the same unruly, sociopathic, somewhat desperate conniver and opportunist whom we’ve all come to know a little better over the last three-plus years.

It certainly doesn’t gloss over the fact that his already-indicted or convicted minions aren’t literally covered in raw sewage or that Trump isn’t an extremely brutish, id-propelled, temperamentally undisciplined, craven, under-informed, financially unstable boss of a New York crime family. In the eyes of God, history and likely 2020 voters he’s almost certainly, in fact, royally fucked. Not to mention what Southern District of New York prosecutors will do after he leaves office.

I’m puzzled by a reported possibility that the report doesn’t look all that deeply or comprehensively at Trump empire finances, as most of what has happened over the last four, five or six years, Russia-wise, has been about money. Trump ran for the Presidency to boost his brand, after all — that was the basic plan all along. Defeating Hillary was an “uh-oh, what do we do now?” moment.

Here’s the report. It’s going to take a while to sift through everything. Please post any comments, conclusions, curious insights or special uncoverings. 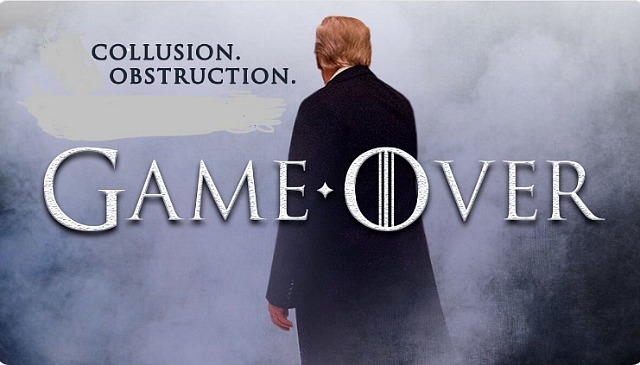 “FIFOG (Festival Internationale du Film Oriental de Geneve) runs from 4.29 through 5.5, but who uses the ‘o’ word these days? The last time was when Paul Schrader used it in a late March Facebook post (“I’ve written or directed films with a black lead, an oriental lead, a female lead,” etc.) Before that was during a viewing of What’s Up, Tiger Lily?.” — posted on 4.11.19.

Even though Quentin Tarantino‘s Once Upon A Time in Hollywood wasn’t announced as a Cannes Film Festival selection this morning, Hollywood Elsewhere is confident it’ll be included. (A well-positioned little bird has told me not to sweat it.) What I’d like to know is, what the hell happened to Pablo Larrain‘s Ema, which also wasn’t announced? Was it deep-sixed, as rumored, because of an alleged Netflix acquisition?

As expected, Pedro Almodovar,’s Pain and Glory and Terrence Malick‘s A Hidden Life were also announced, in addition to Dexter Fletcher‘s out-of-competition Rocketman and Jim Jarmusch‘s previously confirmed The Dead Don’t Die (competition), which will open the festival on Tuesday, 5.15.

HE is all hopped up about Marco Bellocchio‘s The Traitor, allegedly some kind of Godfather-ish crime and betrayal flick.

I’m also regarding Nicolas Winding Refn‘s non-competitive Too Old to Die Young — North of Hollywood, West of Hell warily, but with a muted excitement. It’s not a feature but a segment or two from an Amazon crime drama series, starring Miles Teller and Billy Baldwin, that’s slated to pop on 6.14.19.

HE regrets to confirm that Xavier Dolan‘s Matthias & Maxime is now an official competition selection, as Dolan has almost always infuriated me, the exception being Mommy, which I was half-okay with despite hating the lead performance.

Ditto Bong Joon Ho‘s Parasite (competition), as HE had enormous problems with the grotesque, family-friendly Okja (“A well-directed megaplex movie for kids, and cliche-ridden like a sonuvabtich”). I respected but didn’t exactly surge with pleasure over Snowpiercer and The Host, but…well, BJH just rubs me the wrong way. Always has, always will.

I’m not down on my knees but what happened to Benedict Andrews‘ Against All Enemies, the Jean Seberg movie with Kristen Stewart?