There’s an east-coast critic whose name I won’t mention, but she tweets with some regularity, like many of us, and every so often she’ll mention how she adores this or that somewhat older film. And if I’m startled by her opinion due to having always loathed the film in question, I’ll reply along the lines of “uhm, but that movie stinks! It stunk when it first opened and it still stinks now, plus it bombed at the box-office.”

Once or twice this critic has replied by saying “no offense but who asked you?” or “if you don’t agree with me about something I love please keep your rancid, negative, bordering-on-Satanic opinions to yourself because my love for certain films is sacred and shouldn’t be challenged if I express it on Twitter, so please don’t bring me down and don’t put my friends down…please just agree with me and radiate alpha vibes or keep to your own corner.”

My reply is usually something along the lines of “wait…on Twitter you want people to be well-behaved? On Twitter this or that person sharing views in a blunt fashion gets you upset? Where do you think we are, in Lytton Strachey‘s apartment in Bloomsbury?”

If you can’t stand the heat, you shouldn’t be in the kitchen in the first place.

From Sara Black McCulloch’s “The Truth Hurts: On The Candidate, All the President’s Men, The Post and Vice“: “The Candidate [is] a politically inclined Pygmalion tale that [says] you eventually have to become the role that you’re playing. Marvin Lucas (Peter Boyle) taps environmental lawyer Bill McKay (Robert Redford) to run as the Democratic opposition to U.S. Senator Crocker Jarmon (Don Porter). It’s a Faustian bargain with a twist: McKay is guaranteed to lose, but can still run to further promote his environmental work.

“[But] it doesn’t take too long until McKay is inducted into the entire spectacle of campaigning. His message is slowly tweaked, he gets a makeover, and his demeanor becomes less off-the-cuff and more camera-ready. What you slowly start to notice, however, is the whirr of machinery as he gains popularity. It takes a lot of equipment to make a man and spread his message: the invasive cameras, superimposed TV screens, falling boom mics, and the short bursts of flashing bulb lights. We see him less in person, so to speak, and more through the lens of a camera or on a TV screen. We’re increasingly bombarded with his public image.

“If Lucas is spinning an unyielding gossamer system, then McKay is trapped in it. And it’s one preoccupied with form rather than content. It’s a lesson that McKay will eventually learn the hard way at the end of the film, when he actually wins. We see a dumbstruck McKay look to Lucas and ask ‘What now?’ — only to be drowned out by a mob of friends, family, and supporters. But even before that moment, McKay’s public mask had begun to crack; in moments when he can’t keep up with the other version of himself, he’ll goof off or rebel in private.

“In one scene, he breaks character while rehearsing a speech: ‘Vote once, vote twice for Bill McKay…you middle-class honkies,’ he jests as he double-peace signs like Nixon. The most telling breakdown of all is during the well-known ‘laughing scene,’ wherein a falling boom mic leads to an uncontrollable fit of laughter from McKay. After that, he corpses through the taping of his speech as a frustrated producer yells ‘I fail to see the humor!’

I honestly believe that Avengers: Endgame is one of the most engaging time-travel movies ever made. I’ve never bought into such a wildly absurd, head-spinning fantasy as this, but I submitted with pleasure because it’s so planted and propulsive and convincing — because it believes in itself without blinking an eye.

I’m not sure if it’s the best time-travel flick ever, but it’s certainly among the top three or four. I haven’t decided yet. I’ll figure it out as I go along. Right now I have 20 goodies and 2 baddies.

Obviously Sean Connery was still hanging in there, hair-wise, when he appeared on What’s My Line? in October ’65. (Sidney Lumet‘s The Hill has about to open stateside while Connery was shooting A Fine Madness.) His thatch was thinning or receding a bit, but not to the extent that anyone outside of Harry Saltzman or Cubby Broccoli would call “a problem.” It shows you how rigid the machismo standards were back then. Anything less than a full head of thick hair would reflect badly on 007’s manliness, or something like that. To the best of my knowledge Connery appeared with his own hair in Dr. No and From Russia With Love, but became a rug-man with the shooting of Goldfinger.

HE to readership: Before reading this article, you may want to read two reviews of Avengers: Endgame — Anthony Lane‘s New Yorker assessment and another by The Guardian‘s Peter Bradshaw. Consider their descriptions of Chris Hemsworth‘s currently-conceived Thor, and consider that if these guys are going there then so are hundreds of others. In other words, Hollywood Elsewhere isn’t guilty of spoiling anything. Once you’ve done this and thought things through, feel free to read on.

Beginning of “Fat Thor” essay: Positively or questionably, healthily or otherwise, films and TV shows have been doing their part to normalize obesity over the last…oh, decade or so. Shrugging it off, Jabbas are no biggie, they deserve dignity like anyone else.

In the old days Hollywood would cast portly types in order to nudge the funny bone. (In Michael Curtiz‘s Robin Hood there’s a whole scene devoted to Errol Flynn and his band of Sherwood Forest rascals making fun of the overfed physique of Alan Hale, who was merely stocky at the time.) But over the last decade the message has been “no judgment, no shaming, all sizes are cool and obesity is just…well, just another way of living and being.”

The first time I noticed Hollywood’s fat-friendly mindset was the appearance of “Russell,” the obese Asian-American boy scout in Pete Doctor‘s Up (’09).

Four years later Nebraska‘s Alexander Payne did his part by having Will Forte‘s David ask a plus-sized ex-girlfriend (Missy Doty, who also played the tons-of-fun waitress whom Thomas Hayden Church seduces in Sideways) if they can have sex.

The same year I took note of Patrick Osborne and Kristina Reed‘s Feast, which is basically a charming corporate advertisement for the joys of junk food.

Not to mention the obvious conveyances from Amy Schumer‘s performance in I Feel Pretty, Danielle Macdonald‘s in Patti Cake$, Chrissy Metz‘s mom in Breakthrough, Rebel Wilson in Isn’t It Romantic, etc.

SPOILER: So it means something, I think, that Avengers: Endgame has (a) decided to have a few laughs by making Thor into a beer-drinking lardbucket with a walrus belly, but also (b) delivered a concurrent message that reckless eating and drinking habits aren’t all that cool, and that in the actual world putting on 40 or 50 pounds is a definite indication of depression, loser-tude and sloth.

In other words, directors Anthony and Joe Russo and screenwriters Christopher Markus and Stephen McFeely are saying to the fatasses watching their film with large tubs of buttered popcorn in their laps…they’re saying “yo, we’re talking about you, bruh!” (At my Disney lot screening there were three or four fanboys who were much bigger than Thor.)

In short, Endgame is not only going against the Hollywood narrative of the last ten years but risking the wrath of plus-sized advocates.

Posted this morning by Pitchfork’s Sam Sodomsky: “This is where the country opens up and things get a little weird,” Springsteen writes in his memoir about a pivotal road trip out west. It was the early ’80s and he was learning, for the first time, how to cope with depression in a real way. “As Sisyphus can count on the rock,” he writes. “I can always count on the road, the music, and the miles for whatever ails me.”

Here is the implicit promise of his music, presented with all the burdens and hard consequences attached. The door is open but the ride ain’t free. 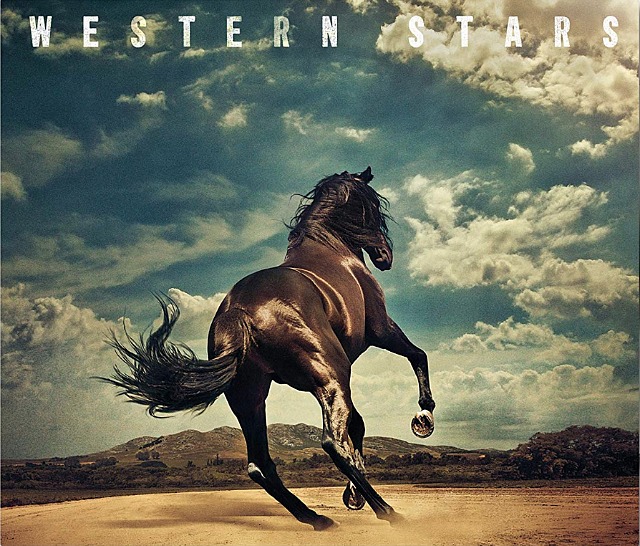 His gorgeous new song “Hello Sunshine” takes place somewhere on the journey. Its friendly, country arrangement sits within a long lineage of radio classics: “Everybody’s Talkin,’” “Gentle on My Mind,” “Good Time Charlie’s Got the Blues,” all songs borne from quiet barrooms in the early hours of the morning. As if to prove his place among them, Springsteen spends an entire verse humming along, strings guiding the way like light from a jukebox. Amid the glow, he’s surrounded by pedal steel raining on the windows, a hushed honky-tonk piano in the corner, a brush-stroked rhythm section that feels like running in place on a soft dirt road.

Bold but lived-in, it’s the most vivid his music has sounded in at least two decades.

The words are sparse but important. The road is “empty”, not “open.” Sunshine is a passing stranger not an absent friend. “You walk too far, you walk away,” he cautions in a low, weathered croon. As the first single from an album that’s been sidelined for the better part of the decade — first for an Obama-era protest statement, later for a jubilant if backward-looking E Street Band tour, and most recently for a one-man Broadway show that turned the span of his songbook into a seemingly complete narrative with a (mostly) happy ending — its pulse feels particularly inspired. It’s a song about changing your ways while there are still miles left to travel, sung by someone with the landscape etched into his heart.

I’m sorry but the trailer for The Poison Rose (5.24, theatres and VOD) indicates that the feature is somewhere between second-tier, private-eye sludge and Ross MacDonald-Elmore Leonard wannabe material. John Travolta as a p.i. with a drinking problem, a second-tier wig and a wolfman beard borrowed from Lon Chaney, Jr.

It also feels top-heavy with questionable Italians — the last names of the three screenwriters (Francesco Cinquemani, Richard Salvatore, Luca Giliberto) and three of the four producers (Oscar Generale, Andrea Iervolino, Richard Salvatore) end in vowels. Even more curiously, Cinquemani and Gilberto share directing credit with veteran director-writer George Gallo (Midnight Run), who’s been writing and directing for 30-plus years. Did George drop the ball or was he ganged up on?

The biggest impression is the appearance of the Orson Welles-sized Brendan Fraser, who just turned 50. The second “whoa” is Famke Janseen, who’s obviously had some work done or has been CG-youthified. Or both.