HE: Mr. and Mrs. Older Middle America are half-asleep at the wheel and lazy as fuck.

Friend: Will you ever be able to face reality?

HE: It’s not that I find Joe deficient, but he’s YESTERDAY’S NEWS….he’s the SENIOR-SET LAYOVER FROM THE OBAMA YEARS, and really, from the ’90s and early aughts. People start to decline in their late 70s and certainly by their early ’80s. The Presidency is not for Joe…not now. He’s an 18-years-older Stuart Symington, when Symington was running in ’60. Or Symington running in ’80, when he turned 79. Joe’s moment has PASSED…water under the bridge. Joe isn’t even a baby boomer — he was born in ’42, or right at the tail end of the Baby Bust generation. The boomers came along in ’46. A number of N.Y. Times and Washington Post columnists have said this over and over. The verdict is clear — in the long run Biden would be better off stepping aside. 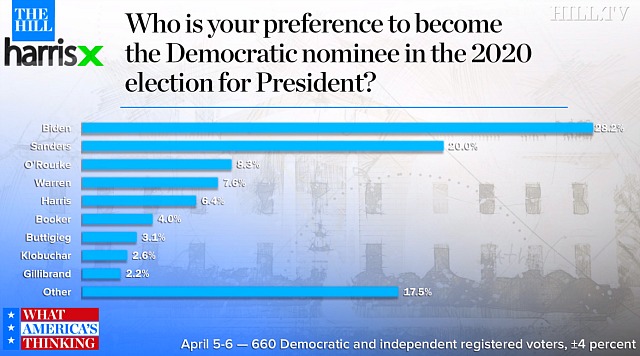 It HAS to be Buttigieg, Beto or Harris. They are now, Biden is yesterday. It HAS to be this way. Biden’s numbers are simply about name recognition — that and the astounding laziness and lack of focus on the part of middle-range poll respondents. Once the real debates start and the ’20 primaries begin, his big lead will evaporate like that. Beto is not over — he’s just gathering himself, working the towns, finding his national voice. The man connects with people. My favorite is Buttigieg — he’s really GOT IT — but Beto would be excellent, and he’s taller than Trump (while Mayor Pete is four inches shorter). The only thing that scares me about Buttigieg is the Alfred E. Neuman resemblance and the fact that he’s only around 5’9″ or thereabouts. The only thing that scares me about Harris is that voice of hers, that lack of oratory command, that scolding tone. She may win against Trump, but she may not.

Friend: Oh, for fuck’s sake! How can people on the left be THIS ETERNALLY STUPID, going all the way back to 1972? THINK about where we are. Three years ago the country was yanked HARD RIGHT. There is zero chance, after the first term of a presidency, that the country will swiftly be pulled HARD LEFT. So Harris is out automatically. She is not a moderate. Mayor Pete is gay. The number one job of the commander in chief is not to make boomers feel like their life is worth a damn or to sell false hope to millennials it is to be in charge of the most powerful army in the world. Anyone who becomes president has to be THAT before they are anything. It isn’t about what YOU LIKE. It isn’t about what liberals need to feel good about themselves. It is about asking an entire country to change horses midstream.

Right now Trump’s disapproval ratings aren’t anywhere near Jimmy Carter’s. Carter was primary-ed by Ted Kennedy. The entire Democratic Party turned against him and we got fucking Ronald Reagan and HW for 12 years! Do you know how badly they raped this country in ten years? THAT SHIT IS ON THE DEMOCRATS. Cut to 2000 — idiots who supported Ralph Nader let Al Gore slip through because people like you didn’t think he was hip enough. We got BUSH for eight more years. Now we come to 2016 and Green Peace and fucking Naomi Klein and idiots like Shailene Woodley could go to Standing Rock and pretend they gave a damn but in reality they would not vote for Hillary. So now we have Trump.

When does this madness end? LOOK AT WHO WE ARE. Three years ago a slight minority elected a guy whose entire campaign was four words on a red hat. This is a stupid country — full of under-educated, desperate people who were sold the American dream AT BIRTH, promised life, liberty and pursuit of happiness AT BIRTH. They want to be richer, have better jobs, buy more shit — they eat entitlement for breakfast. All of us do — even progressives do. So THINK. What are they going to do, follow some bleeding heart who will make them pay higher taxes or vote for the guy they can’t stand but whose entire campaign remains four words on a red hat?

Americans see Trump out there fighting their fight, keeping immigrants out, looking out for THEIR jobs. What are Democrats selling them? NOTHING. They are telling them they all have to be responsible for everyone else in this country. I like all of the Democrats but what I don’t like about democrats is that we seem to STILL SEE reality in America as our little utopian diorama — and if we tinker with it long enough we will reach some kind of perfection. In doing so, we forget an entire country exists outside of it.

HE: You can’t be a realistic, reality-based candidate and hope to win over the backwards-gazing, backwards-leaning, pot-bellied, Middle-American bumblefucks. It’s a fool’s errand. Most many of them are laggers, drag-assers, lazy toads. You have to look forward, appeal to the urban centers and, if necessary, cut the Bumblefucks loose. The U.S. of A. is no longer a ’70s-or-even-’80s style, lunchbucket, middle-class white nation — it’s white + multicultural, African American, Latino, Asian American, many more progressive women voting, LBGTQ, engaged Millennials, etc. A solid majority recognizes that Trump is a lying, corrupt, sociopathic, self-aggrandizing boss of a New York crime family who has so far done one thing — i.e., passed a big tax-break for billionaires and sharply increased the deficit.

Blanche Dubois: “Maybe we’re a long way from being made in God’s image, but new lights have come into the world. In some kinds of people tenderer feelings have had some little beginning! That we have got to make grow! And cling to, and hold as our flag! In this dark march toward whatever it is we’re approaching…don’t hang back with the brutes!”

Producer friend: I have not settled on any candidate, but think our options are excellent, including Biden for the elder-statesman depth, decency and experience he brings. Buttigieg is very impressive. So is Harris. And Beto, once he gets off his sea legs and hits stride, could be a great contender.

Bernie is the only one who is unrealistic. He will not pull in the moderates. And we need them.

I want someone who can win. And at this early stage it remains to be seen how any of them will handle themselves as they dive into the fray. Sniping at Biden now is destructive. This party has to pull together. The wheat will separate from the shaft naturally with eighteen months of platforms and debates. The Democrats cannot continue to attack their own or they will divide and conquer themselves- while Trump lies his way into another term. This harmless touchy feely shit about Biden has been beyond ridiculous to even mention. And I agree with [your friend] that going on about his age is counter-productive. We need to pull together, not self destruct. Assess all the options. But don’t troll the possibilities.