Oscars In The Afternoon

Update: Yesterday the brainiacs in the Academy’s p.r. office issued a statement that the 2020 Oscars would begin televising at 3:30 pm Pacific. Now I’m told that they more or less lied — the actual show, I’m hearing, will apparently begin at 5 pm. So the following riff is more or less moot:

A shocker among the 2020 Oscar night changes announced by the Academy: “The 92nd Oscars will be held on Sunday, February 9, 2020, at the Dolby Theatre at Hollywood & Highland Center® in Hollywood, and will be televised live on the ABC Television Network at 6:30 p.m. ET/3:30 p.m. PT.”

The Oscars are now a mid-afternoon thing? In order to…what, mollify the east coasters who’ve always complained about the show, which starts at 8:30 pm in their zone, going past midnight? Now it’ll be warm and sunny in Los Angeles with blue skies above, hikers humping it up Runyon Canyon trails and birds chirping in the Jacaranda trees, and the Oscars will be going on inside the dark-ass Dolby? Which means that the red carpet parade will start around…what, 1 or 1:30 pm?

The Academy statement in question, issued by p.r. department.

That’s uncivilized, bruh. It’s desperate and common and shows a lack of respect for tradition. It totally demystifies.

There’s always been and always will be a certain mystique about an “evening event”. The swells put on their tuxes and gowns and climb into their rented limos to attend a big event that begins in the early evening (okay, early dusk or 5:30 pm). But the aura dissipates if the Big Swanky Event in question starts in the middle of the damn afternoon.

Would Irving Berlin have written “Top Hat” (and would Fred Astaire have sung it) if the lyrics were about putting on a top hat, white tie and tails in order to attend an event that begins at three-fucking-thirty in the afternoon while the sun is glaring down and little kids are playing in the parks?

So now New Yorkers can start watching the Oscars at 6:30 pm and be done with them by 9:30 or 10 pm — terrific. But how does this benefit the rest of the planet? Londoners will begin watching at 11:30 pm, and Parisians at 12:30 am. How does that help their situation?

HE’s better idea: Begin the Oscar telecast at 1 pm Pacific, 4 pm eastern and 10 pm London time. That way the east coasters can really get their beauty sleep, and the Europeans can crash just after 1:30 am. Or how about 11:30 am? Start the red carpet bright and early at 9:30 am — caterers can serve champagne cocktails with Eggs Benedict. The Oscars would begin at 2:30 pm in New York, 7:30 pm in London and 8:30 pm in Paris. Now we’re talking efficiency and maximized ratings!

I guess I’m okay with the Foreign Language Film category name being changed to International Feature Film, mainly because the term “foreign language” sounds xenophobic. A preferable or more precise description would be “Non-English Speaking”…no? 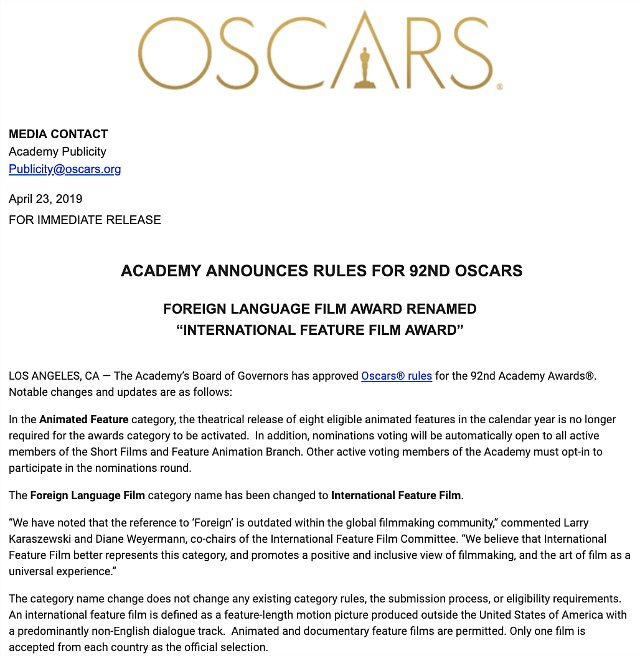