Sanders Must Somehow Be Elbowed Aside

All along I’ve been thinking that sooner or later, Democratic primary voters will realize that Joe Biden is not the guy to go mano e mano with Donald Trump in 2020 (too yesteryear, too gaffe-y, peaked in the ’90s and early aughts, pushing 80) and that Bernie Sanders (also pushing 80) had his big groundswell heyday in ’15 and ’16 and that it’s time for everyone to support an eyes-forward, here-and-now candidate like Mayor Pete, Beto O’Rourke or Kamala Harris.

Now, suddenly, I’m scared of what Bernie might do — of the trouble he might create. He’s got a lot of money, his supporters have been known to behave like lunatics, and he might really fuck things up.

From today’s N.Y. Times assessment by Jonathan Martin: “Some in the party still harbor anger over the 2016 race, when [Sanders] ran against Hilary Clinton, and his continuing resistance to becoming a Democrat. But his critics are chiefly motivated by a fear that nominating an avowed socialist would all but ensure Mr. Trump a second term. 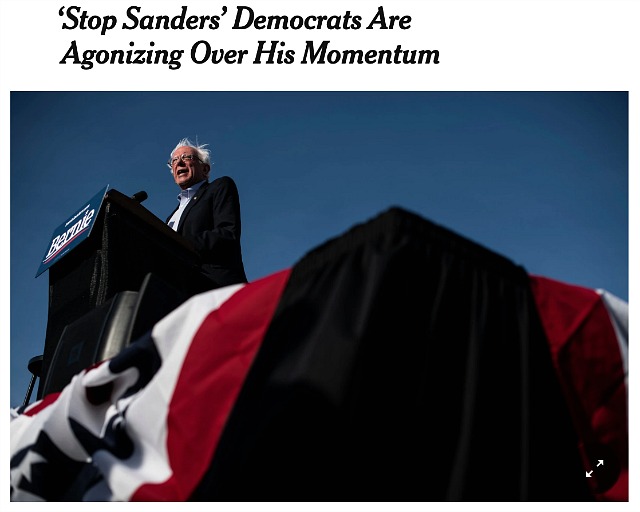 HE interjection: Don’t Democrats remember how Sanders was rejected by black voters in the South in ’16?

Martin:”‘There’s a growing realization that Sanders could end up winning this thing, or certainly that he stays in so long that he damages the actual winner,’ said David Brock, the liberal organizer, who said he has had discussions with other operatives about an anti-Sanders campaign and believes it should commence ‘sooner rather than later.’

“The good news for Mr. Sanders’s foes is that his polling is down significantly in early-nominating states from 2016, he is viewed more negatively among Democrats than many of his top rivals, and he has already publicly vowed to support the party’s nominee if he falls short.”