Three Hours of Vision and Principle

The tragic but affecting story of Franz Jagerstatter is basically that of an Austrian farmer, spiritual seeker and pacifist who sacrificed his life for his convictions. He was drafted into the German army in 1940, but ultimately refused to fight on conscientious objector grounds. He was charged with an “undermining of military morale” and executed (beheaded) in mid 1943. In 2007 Pope Benedict XVI issued an “apostolic exhortation,” declaring Jägerstätter a martyr.

For what it’s worth, a 1971 film about Jagerstatter, titled “The Refusal“, ran only 94 minutes. We can probably safely presume that Malick’s version is a grander, deeper, more penetrating depiction than this 48 year-old film, but you can’t help but furrow your brow and wonder about the 180-minute running time.

Knowing Malick as I do and the fact that principal photography ended sometime in late August 2016, the first suspicion (or fear) that comes to mind is “sprawling,” the second is “precious,” the third is “whispery”, the fourth is “dandelion fuzz” and the fifth, obviously, is “indulgent.” But maybe not. 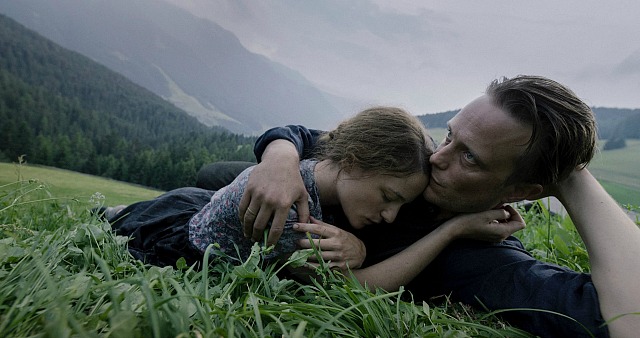 THE REFUSAL – Story of Franz Jägerstätter from GNV Team on Vimeo.