There are three kinds of happiness, for the most part. I could crank myself up and say there are ten or fifteen kinds (and maybe there are), but let’s keep it simple.

The first kind of happiness is the mild, steady-as-she-goes, non-euphoric kind that’s based upon a general, good-enough satisfaction with the basics (fulfilling job, loyal friends, a more-or-less happy relationship with a significant other, financial security) and trusting that good things are in the offing. I’m basically talking about believing in your future — a belief that things are pretty good for the most part, and that you’re not looking at an ongoing or worsening tragedy (like having neurofibromatosis or incurable cancer or living under a hellish police state) and that some of the miles to go before you sleep will be interesting.. 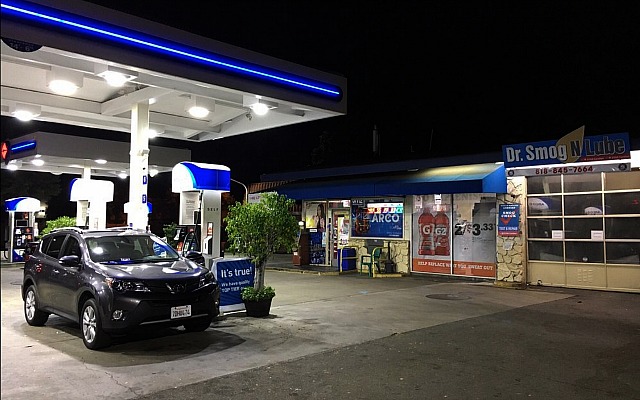 Taken during one of our standard Santa Monica Canyon weekend hikes, which also included detours to Pacific Palisades and Brentwood. 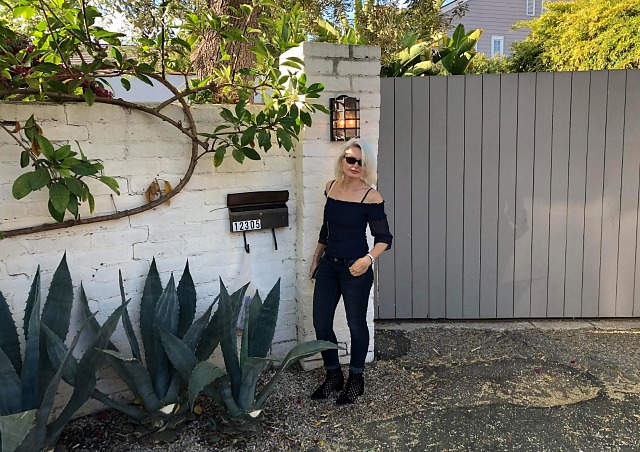 I don’t have to explain where this was taken. The house number gives it away. 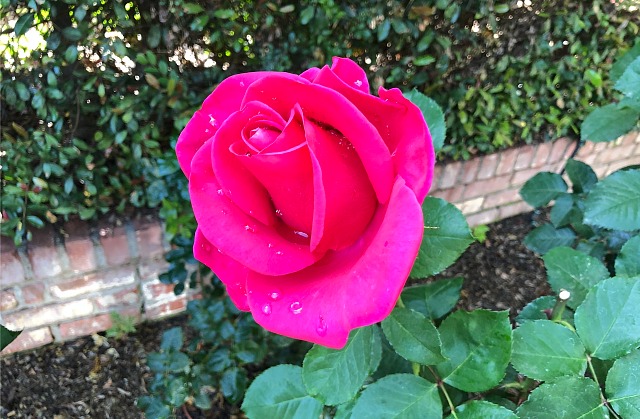 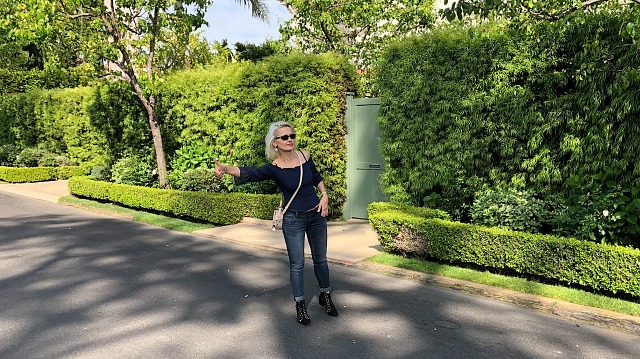 Last night Tatyana wanted to watch Woody Allen‘s Blue Jasmine, which she’d never seen. I hadn’t seen it since the fall of ’13 so I half-watched it and half-wrote, and it somehow played a little better this time. Not that I found it problematic back then. I felt it was a reasonably good tragedy but saddled with a story that was too dependent on A Streetcar Named Desire.

Last night it somehow felt stronger, snappier. I can’t explain why. I was impatient with it six years ago; last night was a better ride.

Tatyana liked it a lot, but at the same time was strongly affected by the sad arc of Cate Blanchett‘s Ruth Madoff-like character. Jasmine is a delusional wife of a financial wheeler-dealer (played by Alec Baldwin) who’s suddenly broke and without a life after Baldwin is busted by the feds and then commits suicide in the slam.

I explained all the Streetcar parallels, but Tatyana hasn’t seen that 1951 film either, in part because it’s too old. She does, however, have a liking for young Marlon Brando.

It’s basically very, very tough to get Tatyana to watch anything. She only wants to watch “masterpieces,” she says. Only films on the level of 4 Months, 3 Weeks, 2 days or A Separation…that line of country. She won’t sully herself with the watching of anything less than top-of-the-mountain classics, and she doesn’t like films that she doesn’t relate to personally in some deep-down way. And she won’t watch genre films or guy films like Heat, The Outfit or The Candidate. And she hates crap. I invited her to join me at a Long Shot screening, but she sensed trouble and declined. And nothing scary or violent.

Tatyana basically watches what she watches because she wants to watch it, and that usually means films with some sort of emotional lift or real-life resonance. Or if she has a special liking for the actor or actress.

“Since Vietnam, every time a Democrat has won the presidency, it’s because Democrats voted with their hearts in a primary and closed ranks around the candidate who inspired them, promising an obvious break from the past and an inspiring vision that blossomed in the general election. Jimmy Carter. Bill Clinton. Barack Obama. All were young outsiders who tethered their message to the culture of the time.

“When Democrats have picked nominees cautiously and strategically falling in line, the results have been devastating, as Michael Dukakis, Al Gore, John Kerry and Hillary Clinton made plain.

“It’s not a perfect rule: While Gore and Clinton didn’t quite electrify the country, they still won the popular vote. And George McGovern was a heart candidate who got slaughtered by Richard Nixon in 1972. But the McGovern wipeout is kind of what Biden and his loyalists are clinging to: the idea that this Trump moment, like the wrenching 60s, is so existential and high stakes that Democrats will overlook their usual instincts and do the sensible thing.

“Theatrical and Irish, Biden surely is hoping that he can be a vehicle for both passion and pragmatism. But if he wins the nomination next year, it will be because Democrats went with their heads, not their bleeding hearts.

Avatar, the last James Cameron film to hit screens, opened nine and a half years ago. Since that time Cameron has been working on making four Avatar sequels. That’s right — four of ’em. Not a sequel or a trilogy but a five-parter if you count the original. Basically a theatrical miniseries.

It was announced today that the release date of the fourth and final Avatar sequel (aka Avatar 5) has been bumped from 12.19.25 to 12.17.27, which is (a) eight and a half years from now and (b) 19 years after the release of the original. Given that Cameron began work on Avatar in early ’06, there will actually be a time span of 21 years between the start of it all and Avatar 5.

Has anyone in the history of motion pictures ever invested this many years in the multi-part fulfillment of a single franchise?

Nothing but upvotes for Lulu Wang‘s The Farewell, which A24 will open on 7.12. Billi (Akwafina), a Chinese-American 20something, flies to China after her grandmother Nai Nai (Zhao Shuzhen) has been diagnosed with terminal lung cancer. The tension stems from a family decision not to tell Nai Nai of her condition.

I’m not questioning the heartfelt Sundance raves, but I have a couple of questions.

The idea, again, is to keep the grandmother in the dark about her illness…right? I realize that trailer cutters always try to deliver on-the-nose emotions but something feels wrong between the 20-second and 50-second mark. The trailer strongly indicates that family members (Akwafina included) are making very little effort to mask their sadness over the situation, to the extent that Nai Nai seemingly has no choice but to ask “what’s wrong?” What’s the point of a family deciding to keep bad news a secret if they’re going to convey their true feelings this blatantly? Wouldn’t everyone try to mask their feelings with too much gaiety?

And if an older women is stricken with lung cancer, wouldn’t she look like it? As in ashen, bent over with a cane, gaunt, chemo treatments, pain medication, napping a lot? And wouldn’t she knew what’s going on anyway? It’s her body, after all.

Right now The Farewell has a 100% Rotten Tomatoes rating.

Regional Journalist Friend: “If you have the time, check out HBO’s Chernobyl five-part miniseries, which premiered last night. Very grim but quite excellent — a perfect look at the incompetence and blinkered Soviet mentality that contributed to this epochal disaster.”

HE: “Oh, yeah. I made a mental note and then forgot about it. It’s almost oppressive how much quality product is streaming out there. Are you sure I won’t absorb radiation poisoning by watching it?”

RJF: “Yeah, there’s a ton of good stuff on TV, almost too much to keep up with. I promise you won’t get radiation poisoning watching it, although you will be watching God knows how many Ukrainians get it. I love the fact that HBO is not gonna let Netflix control the conversation — Chernobyl, Barry, Game of Thrones, the upcoming Deadwood movie. HBO is really hot now.”

To prepare for catching Kantemir Balagov‘s Beanpole in Cannes (Un Certain Regard), last night I watched his 2018 film Closeness (Tesnota) on a Russian streaming site. At a cost of $5 and change, which I was actually charged twice for. English and Spanish subtitles included.

Undeniably grim, powerful and penetrating. A nominal kidnapping saga in the gloomiest small Russian town you could ever imagine, but the focus is mainly on family (a tight-knit Jewish community), despair and resentments. A grim but highly believable milieu. Stark realism gives way to stark miserablism. In many ways convincing, riveting, pause-giving. Very claustrophobic with what felt like too many suffocating close-ups (what a horrible place to live!) but that’s Balagov’s intention, his way of making you feel it. Which I respect.

I believed every minute of it, but the lethargic places it took me to. It left me feeling drained and numb, and saturated with a downish vibe. But with an eye-opening performance by lead actress Daria Zhovner, for sure.

At 118 minutes Closeness seems to drag on longer than necessary. A few scenes don’t seem all that essential to the narrative — they’re basically about Zhovner’s interior life — her feelings of indifference, nihilism. The “taut story tension aesthetic” certainly isn’t upheld start to finish. And that horrible Chechen-Russian snuff film footage from that infamous 1999 Tukhchar massacre. I’m not likely to ever forget the sight of a young Russian solder screaming for his life, and then…I can’t describe it any further.

Overall this is a tough, commendable film, but the despair overwhelms. That’s the basic idea, I realize — this is a story about a community stuck with themselves in more ways than one. Serious respect, not much affection.

All Pedro Almodovar movies are perfect. Even the less-good ones. Whenever I recall my peak Cannes viewings over the last 20-plus years (although my first Cannes happened in ’92), there are always two or three Almodovar films swimming around. Despite the grueling experience of I’m So Excited, the pure-Almodovar-pleasure factor is something I’ve come to expect. I’m fairly certain it’ll be mine to savor when I see Pain and Glory sometime between 5.15 and 5.24..

From Film Comment review By Manu Yánez Murillo, posted on 3.22.19: “Pain and Glory is a heartrending, meditative, and deeply confessional culmination of Almodovar’s prolonged immersion in the waters of autofiction.

“The clues of this fictionalized self-portrait are hidden in plain sight: Banderas, in the role of a lifetime, wears Almodóvar’s messy hairstyle, flashy sweaters, and flowery shirts, and Salvador’s memories are in perfect sync with episodes from Almodóvar’s career. As a pretext for putting its physically, spiritually, and artistically stagnant protagonist into motion, the story knits one of its threads around a restoration of Sabor (Flavor), a movie Salvador directed 32 years earlier, to be presented at Madrid’s Spanish Cinematheque.

“Those happen to be the same number of years that have passed since the release of Law of Desire, whose restoration Almodóvar presented in 2017 at, yes, the Spanish Cinematheque. On that occasion he was accompanied by his greatest muse, Carmen Maura, while in Pain and Glory Salvador (the name is reminiscent of ‘Almodóvar’) intends to attend the premiere with Sabor’s star, a former and estranged alter ego played by Asier Etxeandia, in a veiled reference to actor Eusebio Poncela.

“It goes without saying that the third star of Law of Desire was Antonio Banderas, playing Poncela’s impulsive and psychotic young lover in his third collaboration with Almodóvar.”

From a Variety q & a with Almodovar and Pain and Glory star Antonio Banderas, conducted by Henry Chu:

Variety: “The whole style of the film feels stripped down. Is this a new phase in your filmmaking?”

Almodóvar: “Absolutely. The style, the narration, is a continuation of what I did with Julieta: much more restrained and austere. Visually, the colors in this new phase are still vibrant and intense, because I’m not turning my back on the coloring of my films. But the tone of the narrative is more stark. This is quite a challenge for me, being such a baroque director, to move into this new phase. I don’t know whether I’ll go back again to what I was doing before, because I don’t normally look ahead and forecast what my next steps are going to be.”