“Daniel Craig will be undergoing minor ankle surgery resulting from an injury sustained during filming in Jamaica. Production will continue whilst Craig is rehabilitating for two weeks post-surgery. The film remains on track for the same release date in April 2020.”

So Craig’s ankle wasn’t bruised or sprained — it was sufficiently snap-crackle-popped to require surgery. Doctors, nurses, local anesthetic. And post-surgery Craig will only need two weeks before he’s back to running, jumping, face-kicking and fisticuffing? Sounds like a push. I would think a good three to four weeks would be more like it, if not four or five.

If Craig was required to just stroll around and say dialogue, fine, but 007 has evolved past the guy he used to be — an elegant smoothie who would occasionally punch or plug a bad guy with aplomb — to an X-treme pugilist martial-arts superman. How do you jump back into that only two weeks after ankle surgery? Craig is 51 years old — five years past the normal prime period for a typically fit male.

If I was running Bond 25 I would be seriously thinking about cutting bait and starting fresh. I would let Craig go (paying him off with insurance money) and hire Richard Madden to take over. 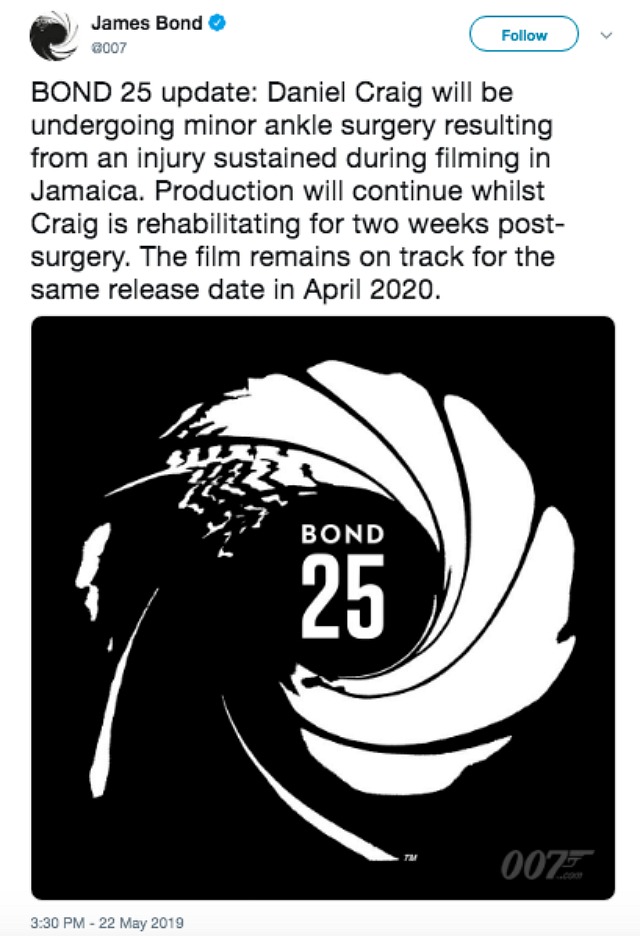