Hollywood Elsewhere disappeared this morning due to the gentlemen geniuses at WP Engine, a cloud-linked ISP that I’ve been with since 2017. Five hours of simulated death due to the failure of a shared server + “miscommunications” + largely incompetent WP Engine staffers who did absolutely nothing to improve the situation for hours on end.

WP Engine tried to explain the problem with a lot of bullshit techno-jargon.

While fretting and whining I came upon an eye-opening essay by internet marketer Matthew Woodward, titled “Why Your Business Must Avoid WP Engine At All Costs.” Woodward knows whereof he speaks, and he’s convinced that they’re really bad news.

One way or another I’m separating myself from WP Engine at the first available opportunity. Hollywood Elsewhere has suffered through the usual issues and outages over the years, but the site has never been unconscious for a five-hour stretch. On top of which these jerks tripled their monthly fee from $99 plus overages to $300 last January, and that was for putting me on a shared server with 100 other clients.

I love that this happened a day before leaving for France. And I haven’t begun to pack yet.

Woodward is advising alienated, WordPress-using WP Engine clients to sign up with a Bulgaria-based ISP called WPX Hosting. They have a server in Chicago but they won’t offer phone chats of any kind, even in an emergency. 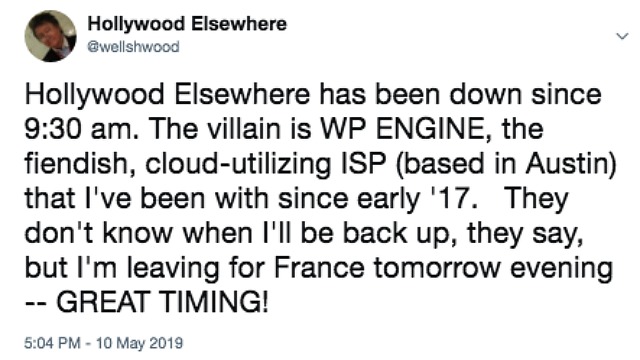 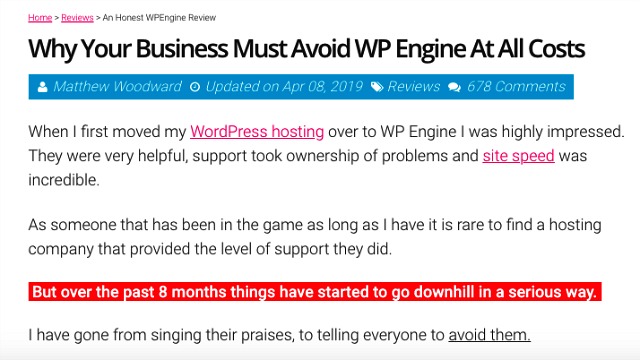