Gently Into That Good Night

Late yesterday afternoon I caught Pedro Almodovar‘s Pain and Glory, which has strangely risen to the top of the Screen Daily chart. “Strangely” because this film about a getting-older director (Antonio Banderas more or less playing Almodovar himself) is one that simmers upon a low flame.

A meditation riff about decline, disease, looming death, drugs, old lovers, creative blockage and memories of childhood, it left me with feelings of respect and appreciation more than any sense of excitement or bracing discovery. It all unfolds in a settled, confident way but in a distinctly minor key.

I’ve worshipped Almodovar all my adult moviegoing life. With the exception of I’m So Excited, his films have always made me smile and swoon. This one felt a little more recessive than most. Settled, reflective, gray-haired, even a little morose at times. I can’t say I was turned on, but I felt sated and assured as far as it went.

It’s a film about getting older and dealing with physical maladies and to a lesser extent creative blockage. An old boyfriend, copping street heroin, a third=act discussions with his late mom (Penelope Cruz), memories of her washing clothes in the river…all of it swirling around in Banderas’s mind.

I liked Pain and Glory well enough, but I wasn’t enthralled. Pedro is a superb filmmaker. I just wasn’t knocked out. 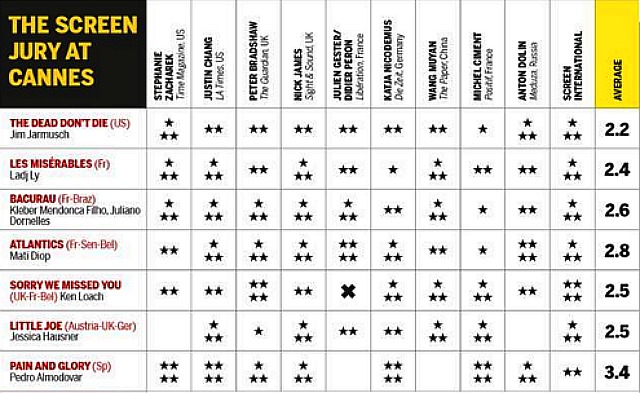