“It Will Happen This Way…”

“It will happen this way. You may be walking. Maybe on the first sunny day of spring. And as you walk past a bookstore, you will notice a book in the main display window — a thriller by James Grady called ‘Six Days of the Condor.’

“Something about the sound of that title will immediately intrigue you, but before you reach the next stoplight you’ll know that six days of plot are too many for a movie — that somehow the days will have to be reduced to three or four. You’ve read in the trades that Peter Yates, the Bullitt guy, intends to adapt the book faithfully as a six-day thing, but somehow you know he will ultimately fail.

“And then a moment later an American car, a dark sedan with tinted windows, will pull over, and an actor you know and perhaps even trust will get out. And he will smile, a becoming smile. And he will leave open the door of the car and offer to give you a lift.”

The walking man was Sydney Pollack, of course, and the actor in the dark sedan was Robert Redford. Weeks and then months passed, and eventually Pollack, Redford, Lorenzo Semple, Jr. and Pollack’s ace-in-the-hole punch-up writer David Rayfiel had reduced the story to three days. 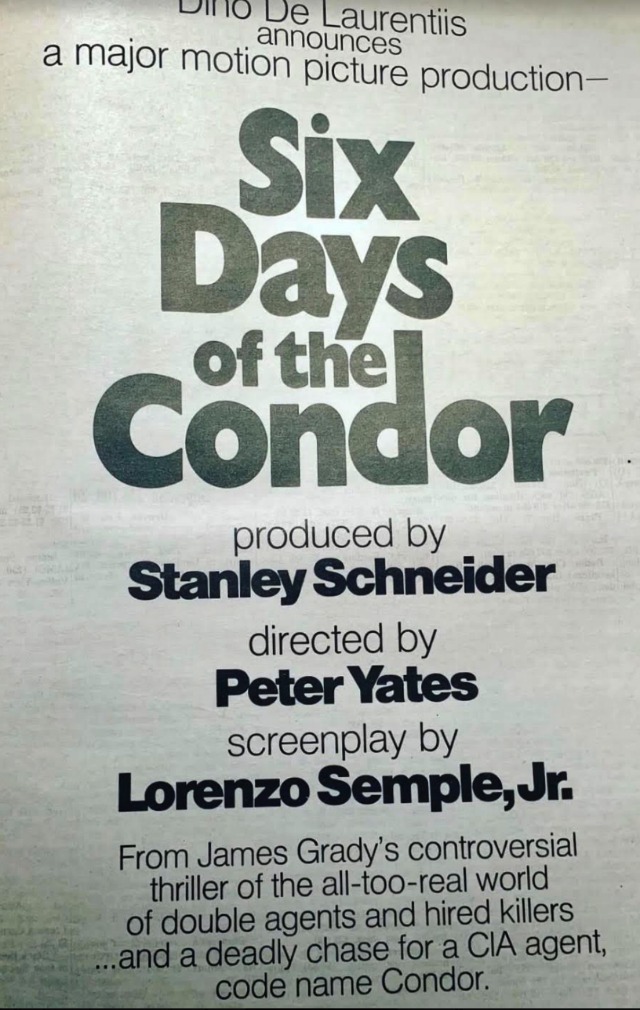 May 3, 2019by Jeffrey Wells10 Comments
« Previous post
Don’t Hold Me To These
Next post »
Hornaday’s “Long Shot” Review Is Dead-On